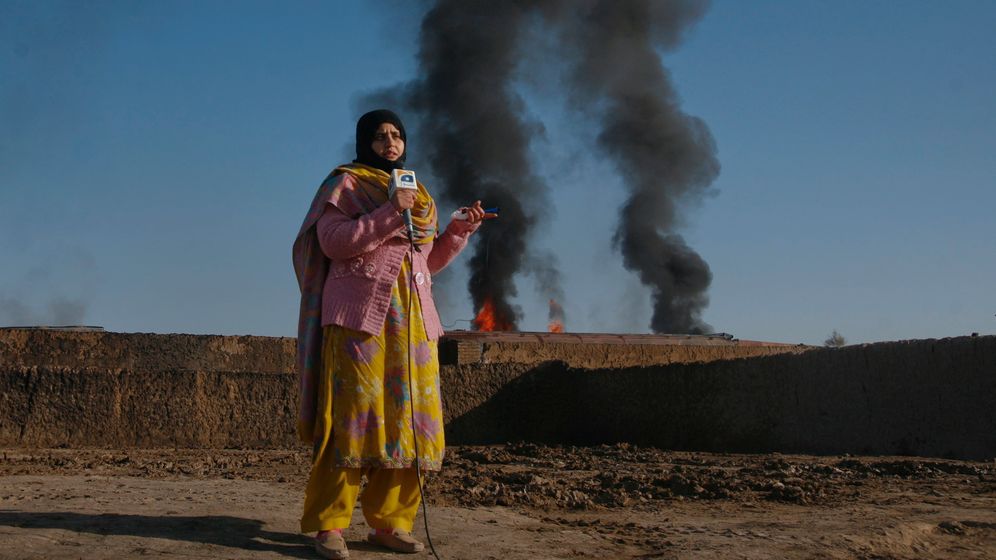 Photo Gallery: The Dangers of Reporting in Pakistan

Hamid Mir leans back in his office chair, staring at his moblie phone. "Afraid? Am I afraid?" he asks. He shakes his head back and forth. "It would be a lie to say no." Since nearly midnight on Tuesday evening, his life has been turned upside down. His Blackberry rings, indicating he has received a text message. It reads, in broken English:

"I have not seen a real bastard than you. I wish somebody comes and strip you naked. I hope some Army man has not done real dirty with your dear ones."

Mir, 45, is one of Pakistan's most famous journalists. He hosts the daily talk show "Capital Talk" in Islamabad, interviewing public figures. He is the face of private broadcaster Geo TV. His business card reads "Executive Editor." He has been threatened often. After he wrote about corrupt politicians some time ago, then military dictator Pervez Musharraf banned him from broadcasting.

Some say Mir sympathizes with the Taliban, while others believe he is a CIA agent, an Israeli spy or that he supports India. He laughs. "When one is criticized from all sides, it only shows that one is only required to be objective and truthful."

But in Pakistan, the truth is risky. More journalists died there this year than in any other country. The organization Reporters Without Borders states that 10 journalists were killed in the country in 2011, out of a total of 66 worldwide. For the second year in a row, they named Pakistan the most dangerous country in the world for journalists.

"In recent years colleagues were mainly the victims of terror attacks by separatist groups or radical parties," Mir says. "Or they died rushing to the scene of an attack when further bombs exploded."

Over the last year, however, the source of threats has altered dramatically. "The main enemy now is the state, the army, the intelligence agency," Mir says.

On Mir's Dec. 14 show, he discussed the question of whether General Ahmed Shuja Pasha, the head of Pakistan's ISI intelligence agency, traveled to various Gulf states to gather support for a coup back home after a United States operation in the northern city of Abbottabad ended with the killing of Osama bin Laden. The rumor began with a blog post by journalist Omar Waraich, who writes for British daily The Independent. In the posting, Waraich quotes Pakistani-born American businessman Mansoor Ijaz, who claims to have received corresponding information from a member of the US secret service.

The affair in which Ijaz is wrapped up has rocked Pakistan. Details include reports that the country's former ambassador to the US, Hassain Haqqani, used a memo to Ijaz to request that US forces protect President Asif Ali Zardari from a military coup and limit the power of Pakistan's generals. The military was outraged, Haqqani lost his post, and the fallout between Zardari's civil government and the military has been palpable.

Mir's show about the intelligence service boss has been rebroadcasted a number of times on Geo TV. On Dec. 19 a petition was registered at the country's highest court for the removal of General Pasha from his post on suspicion he was planning a coup. The next day Mir received the threatening text message.

The Pakistani military and the ISI are powerful institutions in the country. Army leader General Ashfaq Parvez Kayani and ISI leader Pasha have been regularly listed by Western magazines as being among the world's most influential people. Though he was democratically elected, President Zardari is said to be at the mercy of Kayani and Pasha.

"Those who dare to criticize the military are living dangerously," Mir says. He has done so often, not allowing himself to be intimidated. "But this text message still unsettles me," he adds. He published both the message and the telephone number from where it was sent in an effort to protect himself.

One building away, in the capital bureau of the daily The News, Umar Cheema is sitting in the basement. Under a flourescent lighting, he and the paper's investigative reporting team are researching delicate stories on corruption and military interference in politics. The 35-year-old just published an article alleging that Prime Minister Yousaf Raza Gilani paid less than the equivalent of €60 ($78) in income taxes this year. Stories like that create powerful enemies.

But journalists in Pakistan yearn for such scoops, and over the last decade, the media landscape has grown into a large and colorful carnival of sorts. Every few months a fresh newspaper is founded, meanwhile some 90 broadcasters now exist, among them 30 news stations.

Cheema is one of Pakistan's outstanding journalists. Although he has received offers for fellowships in the US, he sees his future in Pakistan. "We can achieve so much here," he says. "I don't believe that the military in this country will stage another coup. The last time was in 1998, when there was no media world in Pakistan." Still, Cheema, like Mir, sees the biggest threat to journalists as the military and intelligence service, not terrorism. His opinion is informed by personal experience.

On Sept. 4, 2010, Cheema was in a cafe with friends at 3 a.m. It was Ramadan, when believers fast during the day, making late nights the best time to meet friends for a meal. On his way home two cars overtook him. "Men in police uniforms got out and accused me of running over a man and causing fatal injuries," he said. To save himself any trouble from the not particularly friendly men, Cheema agreed to get in one of their vehicles, thinking everything would be cleared up at the station.

But he had hardly entered the car before they bound his hands and feet and then blindfolded him. Cheema believes they drove him somewhere in Islamabad or the neighboring city of Rawalpindi. There he experienced what Mir is now being threatened with. "A man told me that I had written bad reports and must now pay the consequences. They tore my shirt from my body and took my pants off. Then I was forced to lay on my belly on the floor."

Five men beat him for a half hour using slats of wood and leather straps. "They forced me to assume different positions, they took photos and humiliated me. In the end, they also shaved my head and eyebrows." They then bundled him back in the car and drove him for around two hours. "They tied a cloth around my head and I couldn't see anything," Cheema recalls. "Then they threw me out of the car in the Chakwal District around 150 kilometers south of Islamabad." They also took care to ensure that Cheema arrived back in Islamabad in one piece so that he could share the news of the lesson he was supposed to have been taught. Someone had placed his car at the location with a full tank of gas. The person also placed 100 rupees (80 euro cents) in his hand for the highway toll he would need to get back home.

Cheema was lucky -- he survived the seven-hour ordeal with his kidnappers. "It is very clear the ISI was behind it," he says. "They made clear that they were unhappy about my reporting." But it hadn't occurred to him that he might be the target of violence. "I never received any SMS like the one Hamid Mir got. But acquaintances repeatedly informed me that the ISI wasn't happy."

Journalist Killed and Found in a Canal

Syed Saleem Shahzad wasn't so lucky. The 40-year-old was also kidnapped in Islamabad at the end of May. He was subsequently tortured and later found dead in a canal. He had also reported critically on the military, writing about ties between Pakistani naval officers and the al-Qaida terrorist network.

"We know that ISI was behind his murder," says Hamid Mir.

"Who else could it have been?" asks Umar Cheema.

US government sources also claim there is evidence that the ISI ordered the killing.

"That's nonsense," says one high-ranking ISI official, speaking on the condition of anonymity. What evidence is there that we had anything to do with that? The fact is that, by now, people try to blame the ISI for everything that is wrong in the world. But we're actually an honourable institution."

The journalists themselves don't have any evidence to back their claims. "Otherwise I would have sued them already," says Umar Cheema. "But," he adds, "Saleem Shahzad was also directly warned by the ISI. He died a short time later."

Hamid Mir has officially sought to have the mobile telephone number from which the text message threat was sent to him investigated. But only the military has access to the data from telecommunications companies in Pakistan. So far he hasn't obtained any information, and Mir doesn't believe he will in the future, either.

5 Bilder Photo Gallery: The Dangers of Reporting in Pakistan