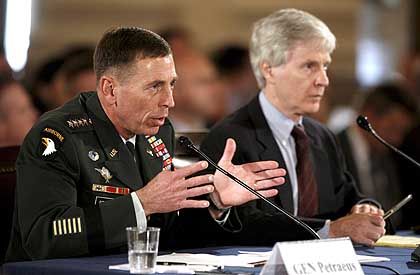 It was the culmination of a slick and professional marketing campaign. The White House left nothing to chance ahead of Monday's report to Congress by Gen. David Petraeus, the commander of US forces in Iraq. In the world of PR, it's referred to as the "rollout" of a new product.

First phase: The advertising campaign. In this case a $15-million blitzkrieg of patriotic TV ads in recent days, financed by the lobby group of former government spokesman Ari Fleischer. Second phase: The "buzz," artificially whipped up by maximum secrecy and the absence of any advance interviews. That helped ensure that the New York Times obligingly referred to the report as possibly "the most consequential testimony by a wartime commander in more than a generation." Third phase: The product itself -- drum roll, fanfare, Petraeus striding into the limelight of Congress.

With a soldier's punctuality, the general marched past a cordon of protesters into Room 345 of the US House of Representatives where he was met by a lightning storm of photographers' flashguns. He wore his dress uniform, an impressive array of medals on his chest. His hair was meticulously parted, his neck shaved in the military fashion. He looked like a Hollywood general. All US TV networks and news stations were broadcasting live.

But after all the crescendo, his statement was something of an anticlimax: "As a bottom line up front, the military objectives of the surge are, in large measure, being met." He added: "Iraq's problems will require a long-term effort," and said a rapid withdrawal would produce "a number of dangerous results." The upshot: The show must go on.

His "progress report" was concise, sober and precise -- logical and totally predictable. Armed with statistics and graphics, he explained how coalition and Iraqi forces "have dealt significant blows to al-Qaida-Iraq," and how their operations had "helped reduce ethno-sectarian violence." He talked of how well things were going in the model province of Anbar. "The security situation in Iraq is improving." But for that precise reason, he added, "a premature drawdown of our forces would likely have devastating consequences."

What Petraeus, diplomatically backed up by the US Ambassador to Iraq Ryan Crocker, did not openly say was that his statistics are disputed. His claim of a reduction in violence is based on narrow figures that ignore, for example, the murder of Sunnis by Sunnis, or Shiites by Shiites. Other independent studies using a broader methodology have come to somewhat less flattering conclusions.

Did anyone expect otherwise? Ultimately the man is defending his own strategy, and that of his boss, US President George W. Bush. "General Betray Us" is how he is described by the left-wing anti-war group MoveOn.org in full-page newspaper ads. Their propaganda campaign claims Petraeus is Bush's dogsbody.

A harsh judgement, but one shared by the majority of Americans. In a recent Gallup poll, 53 percent admitted they saw Petraeus as a messenger for "Bush's opinion," while only 40 percent perceived him as independent. It is no coincidence that the US press keeps referring back to an earlier Iraq presentation -- the subsequently discredited appearance of former Secretary of State Colin Powell at the United Nations in February 2003, which heralded the beginning of the Iraq War.

"I wrote this testimony myself," Petraeus said, courteously but clearly, the model officer and gentleman. But the fact that the four-star general had to begin his testimony in this way indicates just how tense the atmosphere was.

The tension was apparent in the loud protest calls by demonstrators in the hall -- mostly members of the feminist group Code Pink, dressed in pink robes, who were pulled away by the guards. "Off they go!" grumbled Democrat Ike Skelton, chairman of the House Armed Services Committee, who didnt like to see others stealing the limelight.

In fact, in spite of the general theme of an impasse, there was hope to the very last that Petraeus would announce a breakthrough -- something that could pull Washington's truck out of the mud.

But even before Petraeus opened his mouth, these hopes were dashed, and not only because of the general himself: Democrats as well as Republicans misused the first meeting as a soapbox, where they could clarify their positions on the war and a drawdown of troops -- regardless of what Petraeus would go on to say.

Skelton jeered that "General Petraeus who sits here before us is almost certainly the right man for the job in Iraq, but he's the right person three years too late and 250,000 troops short."

His colleague Tom Lantos, Chairman of the House Committee on Foreign Affairs, was more sarcastic. "The fact remains, gentlemen, that the Administration has sent you here today to convince the members of these two committees and the Congress that victory is at hand," he said. "With all due respect to you, I must say ... I don't buy it."

The Republicans were also busy trying not to show any willingness to compromise. "We brought down the Berlin Wall," blustered California Congressman Duncan Hunter, reaching for a crisp soundbite -- since he's also flirting with a marginal presidential run for the GOP. Therefore, he said, we also can't give up in Iraq.

So the old divides in Washington widened again so conspicuously that even Petraeus couldn't overlook them. The Republicans see the Iraq war as their "front line" in the war against terrorism -- which, in turn, they see as an ideological, generation-shaping conflict like the old wars against fascism and communism. For the Democrats, on the other hand, Iraq is just a cumbersome detour from the nation's real priorities.

No general is able to cement over these fundamental political differences -- and certainly not one who as far back as 2004 praised the supposedly tangible progress in Iraq, before things really went down the tubes. Instead of this, Petraeus yesterday helped the White House to open up a new front -- namely against Iran.

He mentioned Iran 10 times in his report. Iran, he says, consciously adds fuel to the violence in Iraq by supporting the Iraqi militias: None of us earlier this year appreciated the extent of Iranian involvement in Iraq. Iran is also trying to transform the militias into a Hezbollah-like force to serve its interests and fight a proxy war against the Iraqi state and coalition forces in Iraq.

The Republicans promptly took the bait. Hunter grumbled about the deadly military equipment (that) continues to flow from Iran. His party colleague Ileana Ros-Lehtinen predicted that the radical Iranian regime  will increase its interference in Iraq if the US rapidly withdraws."

The Democrats ignored the topic of Iran, preferring to clutch at the only olive branch which Petraeus had handed to the supporters of withdrawal: a reduction of US troop strength by around approximately 30,000 soldiers by summer 2008 -- in other words, to the old level before the surge.

This, grumbled Lantos derisively, is only a token withdrawal." The fact that Petraeus is presenting the only alternative as being a hypothetical, rapid and irresponsible withdrawal" -- a crass demand which no one is suggesting any more, not even the Democrats -- is, in Lantos' opinion, an attempt to intentionally distract attention from other options.

The general's campaign in the Senate will continue Tuesday, on the sixth anniversary of the 9/11 attacks. He will appear in the morning before the foreign affairs committee, in the afternoon before the military committee, and finally Wednesday before the press. The talk in the White House is of closing arguments."

The date for Tuesday's appearance was selected completely consciously. Bush's strategists probably know that each senator will refer to 9/11 today and thereby help to link the 2001 attacks and Iraq together in people's minds -- despite the lack of any proven connection.

While he was talking, CNN announced that another seven US soldiers had been killed near Baghdad. The deaths bring the total of fallen US troops in Iraq to 3,770.