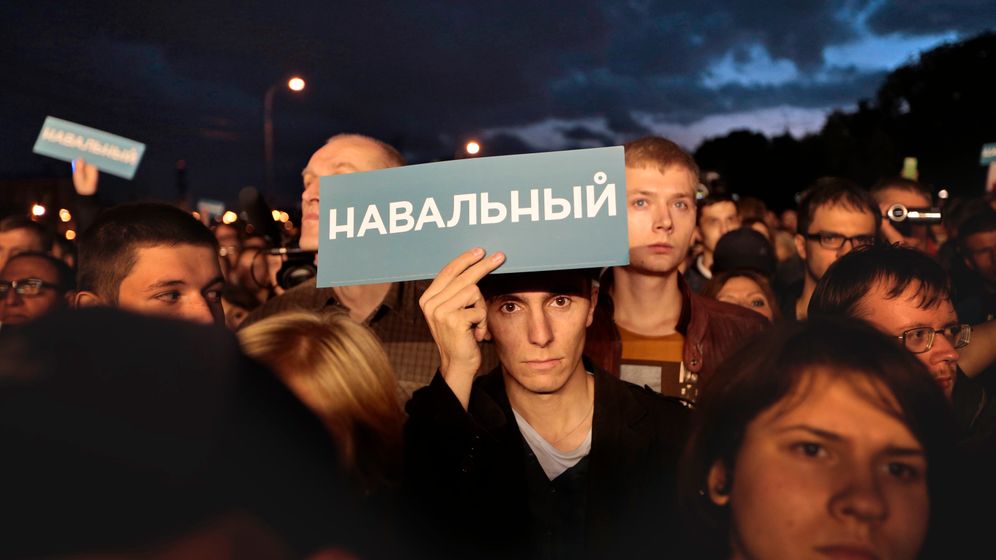 Alexei Navalny's voice is calm but combative as he speaks from the stage. Inspired by the robust 27 percent that voted for him the day before in the Moscow mayoral elections, he is at his rhetorical best. "Russia deserves a real and strong opposition! That is us," Navalny cries out. He is now the uncontested leader of Kremlin opponents, even if Mayor Sergei Sobyanin will remain in office after officially receiving 51 percent of the vote. Navalny raises his fist: "We are the power!" he cries. The masses join him in celebration.

Navalny drew more than 10,000 supporters on this Monday night within sight of the Kremlin on Bolotnaya Square, the place where the protest movement began almost two years ago. During parliamentary elections in December 2011, the Kremlin had clearly engaged in widespread electoral fraud in order to secure the desired results for President Vladimir Putin's ruling party, United Russia.

Back then, 100,000 people protested. This time the amount is significantly smaller -- and that's probably a good sign for the democratic awakening in Putin's Russia. "Everyone predicted barely 20 percent for Navalny and prepared ourselves to take to the streets if it was significantly less," explains the Moscow political analyst Alexei Markarkin. "Now it is nearly 30 percent. What is there to demonstrate about?"

Navalny has filed a complaint with the Moscow electoral commission, citing alleged irregularities and fraud. Many of his supporters, the majority of whom are younger voters, refer to him as "our mayor." Navalny has called for a recount and a run-off. "They have stolen the election from us," the crowd chants.

But it seemed doubtful on Monday evening that Navalny would be able to incite the Moscovite masses to wider protest. The people of the Russian capital have flashed Putin and his team the yellow card, but they will now go back to their everyday lives: work, succeed, have fun in this hard and hedonistic boom town where less than 1 percent are unemployed. Navalny's "magnificent result," as analyst Markarkin calls it, was also made possible by the fact that many supporters of the incumbent Sobyanin stayed home because his victory was a foregone conclusion -- and because Sobyanin has all the magnetism of a mid-level bureaucrat.

Voter turnout was an abysmal 32 percent. This also had to do with the fact that, unlike in prior elections, the result seems not to have been a result of rampant ballot stuffing by the ruling party. Even Golos, the independent election monitoring agency much despised by the Kremlin, has not yet identified any serious fraud or voting rights violations.

Crisis of the Old Parties

Navalny, though, has not only achieved notable success at the polls; he is also in the process of turning Russia's dusty party system on its head. The parties represented in Russia's parliament, the Duma, look archaic next to the dynamic, young politician. The candidate for the nationalistic LDPR, Vladimir Zhirinovsky, dropped below 3 percent after Navalny demanded tougher laws and visa requirements for foreign workers.

The ruling United Russia party, successfully nicknamed "the party of crooks and thieves" by Navalny several years ago, didn't even officially enter the mayoral race. Instead, incumbent Sobyanin, a member of United Russia, stood as an independent candidate. He knew that Putin's party is hated by many Muscovites.

Navalny took on the full force of the state media with clever street campaigning and on social media like vkontakte, Facebook and Twitter, where his supporters clearly dominate. He accomplished the feat of being mentioned more frequently in the media than his opponent Sobyanen, despite the fact that news about opposition candidates is usually hushed up. Even within the state-controlled media there are Navalny supporters, who drummed up support for him in articles and TV segments devoted to the opposition.

"Tonight is the birth of a new movement," Navalny called out to the crowd on Monday evening, flanked by his wife Julia. He has an American-style election campaign now behind him. Filip and Lena, a young couple who both study linguistics at the Moscow State University (MGU) said they are sure "that our children will one day live in a real democracy." Igor Jurgens, who was an economic adviser to the Kremlin under former President Dmitry Medvdev, predicts that the extra-parliamentary opposition will be integrated into the party system. Instead of a handful of slavish Kremlin followers, there would finally be a real opposition. The election for Moscow's state parliament in one year could be the test run.

Whether that happens or not depends on the direction Putin takes. He opened the door in Moscow to freer elections, albeit with the ulterior motive of humiliating Navalny and the opposition with a crushing defeat. But that didn't happen.

Still, prison camp still hangs over Navalny like a sword of Damocles. In a dubious trial in the provincial town of Kirov, he was sentenced to five years in prison in July for stealing wood. The judgement, however, is not yet final. Now the big question is whether or not Navalny will be put behind bars. Only one person in Russia truly knows the answer: Vladimir Putin.