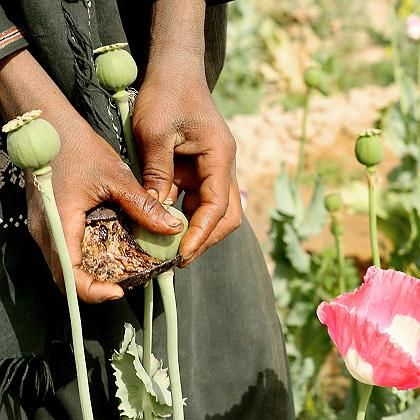 Corruption. Crime. Addiction. And money for the Islamist Taliban insurgency. The list of ills engendered by opium and heroin production in Afghanistan is long. So too is the list of buyers -- the country accounts for over 90 percent of all opium produced on the planet. And international efforts to cut that output have proven fruitless.

But a change of strategy may be on the horizon. Governments in Berlin, Paris and Rome, along with NATO leadership are discussing a potentially explosive new idea: the legalization of Afghanistan's opium production. The plan envisages farmers being able to sell their poppies to officially licensed buyers for the same price they currently get from the drug barons. The product could then be sold to the pharmaceutical industry for pain medication and other products.

"We are not bringing drug cultivation under control with the concepts we have had up to now," a NATO general responsible for Afghanistan told SPIEGEL.

A quick glance at production statistics proves the general's point. The UN Office on Drugs and Crime (UNODC) found that the amount of raw opium produced in Afghanistan in 2006 had increased by 49 percent over the previous year to around 6,100 tons. Much of the proceeds -- an estimated $3 billion -- are pumped back into the Taliban, as the Islamists continue to gain ground against NATO and US forces in the southern part of the country.

Worse, battling opium production is made more difficult by the country's instability. Zalmai Afzali, a spokesman for Afghanistan's Ministry of Counter Narcotics told Reuters earlier this month: "If we do not have peace in the coming months, we will probably end up with another boom in opium production for 2007."

The UN also suspects that many in the Afghan government may be complicit in the opium trade. Afghan President Hamid Karzai's brother is likewise suspect.

So far, the coalition forces and the Afghan government have focused on trying to eradicate the poppies used to produce opium and heroin and attempting to convince poor farmers to plant something else. The US likewise prefers destroying poppy crops. The strategy, though, has served to force many desperate farmers into the arms of the Taliban.

Legalization, though, could pose its own risks. Critics of the plan warn that as long as some members of the state apparatus are in the pay of the drug barons, the legalized cultivation of poppies could just serve to increase their income.