A huge number of people in Germany and other European countries can hardly wait to get vaccinated against COVID-19. In Serbia, by contrast, it has sometimes appeared difficult to find someone willing to accept the jab. The syringes in the country, after all, were not filled with a product from Western pharmaceutical companies, but with a vaccine developed by the Chinese company Sinopharm. Nevertheless, Serbian Health Minister Zlatibor Lončar elected to become the first person in his country to receive the vaccine.

"I was guided by two basic facts. First, that the vaccine meets all the safety criteria. And second, that it is effective," says Lončar, a medical doctor. He received his injection in January. "When I was convinced of all the above, I was able to stand up before the citizens of Serbia and suggest that they start mass vaccination."

Similar conclusions have been reached in Turkey, the United Arab Emirates, Indonesia, Paraguay and a growing list of other countries. Residents of those countries are to receive vaccine from China or Russia because the elixir from pharmaceutical companies in the West is in short supply. Indeed, the vaccines from BioNTech and Moderna, both of which have proven to be highly effective in clinical studies, are essentially sold out, while the product developed by AstraZeneca has been shown to be less effective.

Russia, though, hopes to deliver its vaccine to 50 countries and is planning to open production sites in India, Brazil and South Korea. The Chinese producers Sinopharm and Sinovac, meanwhile, have signed contracts with at least 24 countries and have already begun exporting their vaccines to a number of them.

Serbia is in the unique position of pulling from whatever vaccine source is available. "I can say that all these vaccines used in our country – Chinese, Russian, German-American – are the only way and means to defeat the coronavirus and put it under control," says Lončar. "One should not look at where the vaccines come from, but at their quality, safety and efficacy."

But the vaccines from China and Russia haven't yet been granted such seals of approval. They may already be on the market, but they have not been subject to the kind of clinical trials that are standard in the West. They were likely tested on people under questionable conditions – just hoping they would work.

The state-run Gamaleya Research Institute of Epidemiology and Microbiology in Russia presented its vaccine way back in August. It is called Sputnik V, after the satellite that the Soviet Union fired into orbit 60 years ago – with mice, rats and two dogs on board.

Vaccine development was funded by the Russian Direct Investment Fund (RDIF), the state-run investment fund that is now responsible for marketing the drug. "We understood that there would be lots of skepticism and resistance to the Russian vaccine for competitive reasons," RDIF CEO Kirill Dmitriev told the journal The Lancet Infectious Diseases. "Therefore, there was a decision to call it a Russian recognizable international name."

In contrast to the highly effective yet extremely delicate products from BioNTech and Moderna, the Sputnik vaccine does not have to be stored at extremely low temperatures, remaining viable at 2 to 8 degrees Celsius, which makes it much easier to transport. It has already been administered to 1.5 million people in Russia.

commentary in the The Lancet

The RDIF insists that it is effective. "The Sputnik V vaccine’s efficacy is confirmed at 91.4% based on data analysis of the final control point of clinical trials. The Sputnik V vaccine efficacy against severe cases of coronavirus is 100%," reads the website set up for the vaccine. For quite some time, no source was provided for the claim. In the current edition of The Lancet, however, researchers have published interim results from a randomized, controlled Phase III trial in Russia showing 91.6 percent efficacy against COVID-19.

"The Sputnik COVID-19 vaccine candidate appears safe and effective," reads an accompanying commentary in the medical journal. "The development of the Sputnik V vaccine has been criticized for unseemly haste, corner cutting and an absence of transparency. But the outcome reported here is clear and the scientific principle of vaccination is demonstrated, which means another vaccine can now join the fight to reduce the incidence of COVID-19."

The Russian vaccine relies on a specialized delivery vehicle, a harmless adenovirus. It is a well-tested technology, known as a vector vaccine, but the body can become immune to the delivery virus, particularly in cases where additional doses are necessary. That could render the Russian vaccine ineffective over time.

In January, the Gamaleya Research Institute discussed that and other concerns about the Sputnik V vaccine with experts from the European Medicines Agency (EMA), which is responsible for evaluating drugs for use in the European Union. The confidential meeting focused on the documentation necessary for a proper scientific evaluation. According to an EMA spokesperson, it remains unclear if the Russians intend to apply for EU approval for the vaccine.

Business, after all, is doing well without it. Argentina, Bolivia, Brazil, Paraguay, Venezuela and Algeria intend to deploy the vaccine or have already begun. Hungary was the first EU country to place an order with Russia – for 2 million doses. In late January, a national agency in the country granted the vaccine emergency approval. If the bureaucrats in Brussels are too slow in acquiring vaccines, Hungarian Foreign Minister Péter Szijjártó told Euronews, "then we have to secure additional supply to the Hungarian people."

State-run media outlets in China are currently busying themselves with casting doubt on the safety of Western vaccines. Journalists have claimed that officials refused to investigate the deaths of people injected with the BioNTech/Pfizer vaccine. But the Paul Ehrlich Institute, Germany's medical regulatory body, did look into the cases and found no cause for suspicion. It noted that with the vaccine being administered to tens of thousands of elderly people and individuals already suffering from an illness, it is hardly surprising that some of them will coincidentally pass away around the time of receiving their injection.

The campaign is clearly an attempt by China to distract from the discrepancies in its own vaccine development. By November, almost a million people in China had been vaccinated – without waiting for the results of large-scale, Phase III trial. From a Western perspective, such an approach smacks of an uncontrolled experiment involving huge numbers of people.

Chinese producers had launched studies outside of China. A Sinopharm trial was undertaken in the United Arab Emirates in July involving 31,000 participants, while a similar study in Bahrain started a short time later. But no data from those studies was published. Still, Persian Gulf health officials claimed that the Chinese vaccine demonstrated 86 percent efficacy and granted it approval.

"For countries with a rampant epidemic, even a vaccine with 50 percent efficacy will reduce pressure on health services, allowing them to cope."

Adrian Esterman, biostatistician at the University of South Australia

As in Serbia, the UAE health minister had himself vaccinated in an attempt to demonstrate its safety. Plus, as the Economist noted, "it helps to be a police state with little tolerance for dissent." According to the piece, UAE security officials go after people in the country who spread rumors about alleged dangers associated with the vaccine. Local newspapers published stories about long lines of people waiting to be vaccinated. And the campaign has had the desired effect: As a percentage, more UAE residents have been vaccinated than in any other country in the world except for Israel.

The second Chinese vaccine, produced by Sinovac, has also been the subject of numerous trials. According to a study in Turkey, it proved to be 91 percent effective. Another study in Indonesia, though, revealed a far lower efficacy of 65 percent, while a test with 10,000 participants in Brazil produced two different numbers. Initially, researchers announced an efficacy of 78 percent, only to revise it downward to 50.38 percent a short time later.

Vaccines from all countries will be needed – as long as the data provided transparently prove their safety.

Still, Brazilian officials intend to approve the vaccine. After all, even a weak vaccine is better than none at all. "For countries with a rampant epidemic, even a vaccine with 50 percent efficacy will reduce pressure on health services, allowing them to cope," says Adrian Esterman, a biostatistician at the University of South Australia. And perhaps the vaccine is actually more effective than the numbers show.

The World Health Organization (WHO) is now hoping to gain a better insight into the vaccine situation in China. A WHO team has already arrived in the country to tour the production facilities operated by Sinovac and Sinopharm. The companies have submitted trial data and are apparently hoping for emergency WHO approval for their vaccines. A decision isn't likely to come before mid-March, but a positive evaluation would have far-reaching consequences. The Chinese would finally be credible and could start delivering their product to COVAX, the international aid organization set up to buy vaccine and distribute it to poorer countries.

According to estimates, between 10 and 11 billion vaccine doses must be administered worldwide to stop the coronavirus. Producers will need until 2023 or 2024 to produce that high a volume. And to reach that target, vaccines from all countries will be needed – as long as the data provided transparently prove their safety. 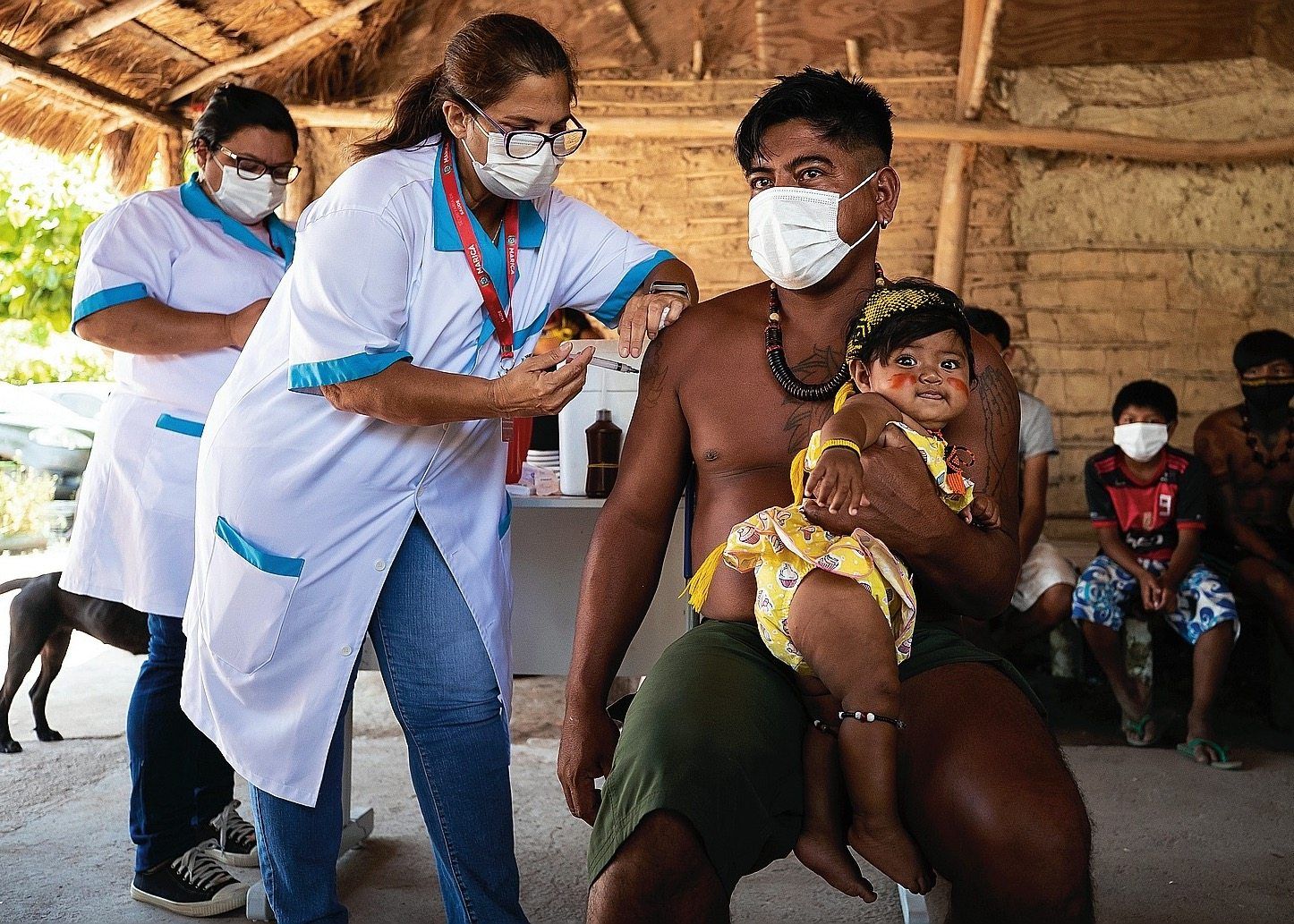 A man in Brazil being vaccinated. 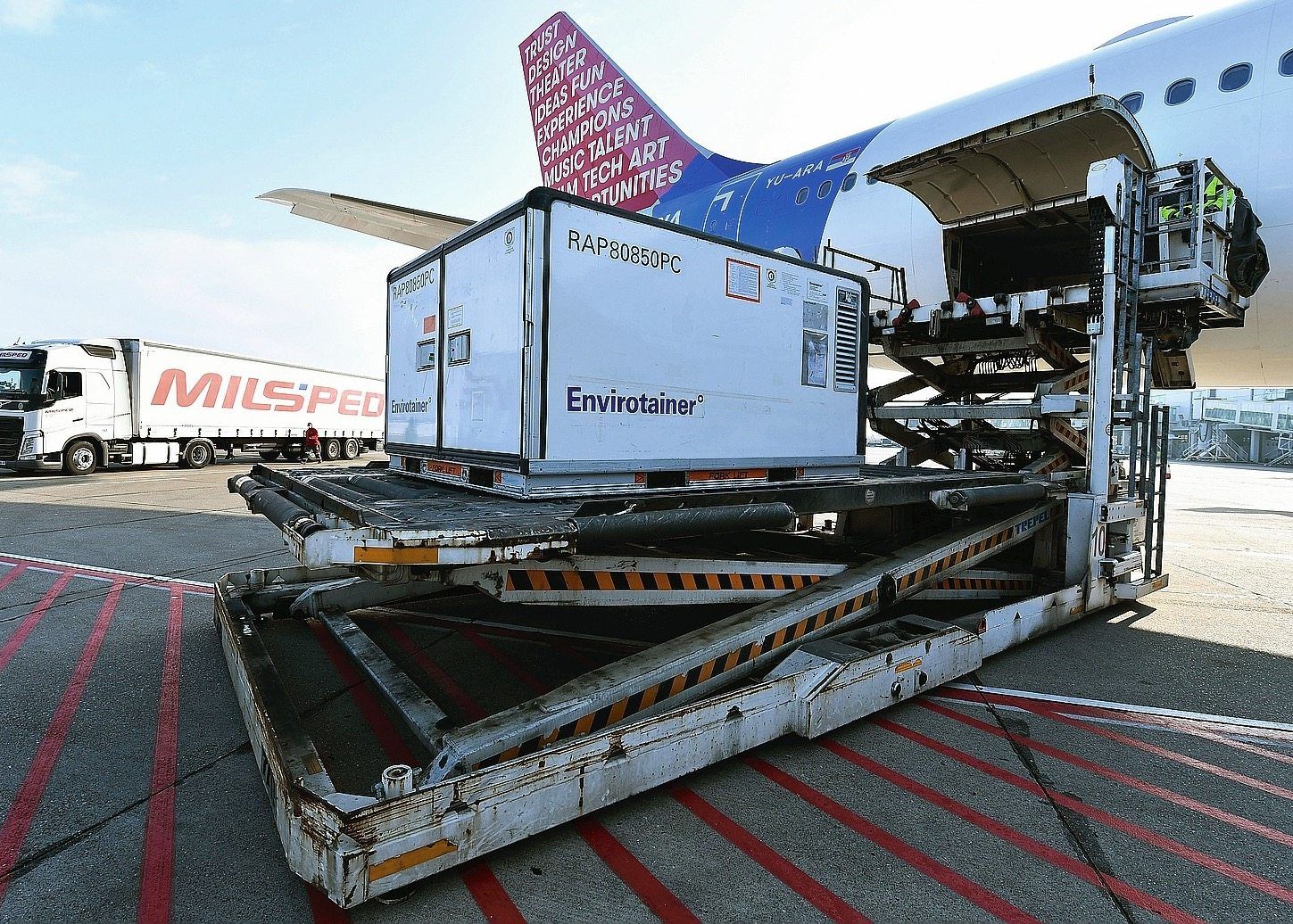 A vaccine delivery from China at the Belgrade airport.