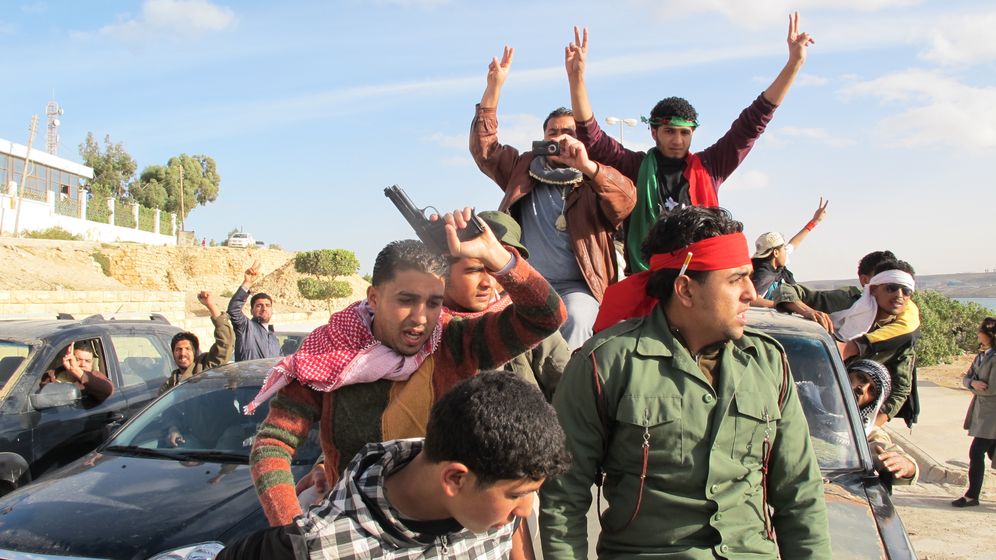 Our journey into the dark world of Moammar Gadhafi gets off to an unpleasant start. On the other side of a border crossing from Egypt into Libya -- where thousands of Egyptian migrant workers have lined up to escape Libya with whatever belongings they can carry -- we are stopped by a group of young men. Their faces are covered in cloths and some wear military uniforms. Pistols and AK-47 assault rifles appear from under their jackets.

One of them leans into our car. Instead of yelling, he breaks out into a big smile. "Welcome to Libya," he shouts. "At last, you've come to report the truth about what's happening in our country." Another one hops into the front passenger seat of our van and tells the driver to step on it. 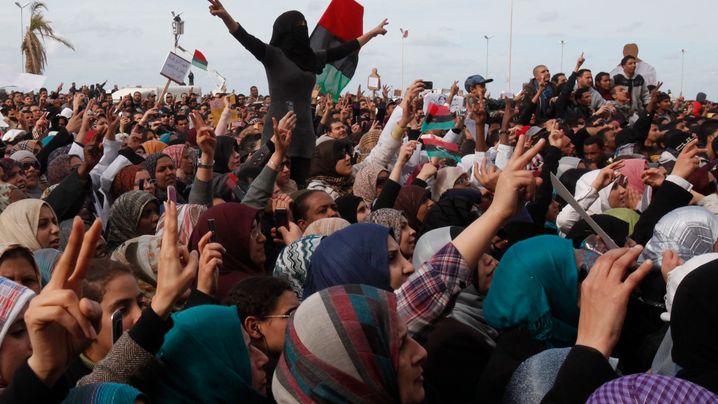 We drive past signs of a regime that appears to have vanished already in the this part of Libya. At the Egyptian border there is still a majestic archway. Like all the symbols of the power of Libya's eccentric dictator, it is huge. It's adorned with an outline of Libya in bright green, with the sun rising behind it, and a personal greeting from Gadhafi himself. The young man in the passenger seat points. "We'll tear that down before long," he shouts. "Gadhafi will also fall. Soon, the people will finally rule over Libya -- and no longer a mad ruler."

The bus races along the coast, deeper into Libya. The other side of the road is jammed with hundreds of cars piled with whatever people could get their hands on, making slow and tortured progress toward the border. Hardly anyone is on our side of the road, except a few journalists intent on breaking the news blackout ordered by Gadhafi. They finally want to get a glimpse, in person, of the country's chaotic conditions.

A New Generation of Revolutionaries

The young rebel in our van says it's still impossible to reach Benghazi, one of the hotbeds of the uprising. He says it's still too dangerous, and he will only be able to escort us as far as the port city of Tobruk, which lies about 150 kilometers (93 miles) west of the Egyptian border.

The forces of the revolution appear to have taken almost total control over eastern Libya. They've set up checkpoints every few kilometers to monitor traffic. Saddam, a brawny 19-year-old with a covered face, mans one of the many roadblocks. He says that he and some other young men stole their uniforms from an army base.

Saddam opens his jacket a bit to show off his pistol. "Now we are also armed," he boasts, "and we will fight to the last man against Gadhafi, his security forces and even against his brutal mercenaries."

Once we pass the checkpoint, about 50 kilometers into the country, we start seeing the red, black and green flag that has been used by regime opponents. It's the flag once used by the Libyan monarchy, which Gadhafi's revolution toppled in the 1960s. Now the flag stands for a new Libya, and it's anyone's guess what a new government may look like. Before the nation reaches that point, says Saddam, Gadhafi has to be overthrown and killed.

Cutting the Dictator Off at the Purse Strings

Like most of the other rebels, Saddam does not belong to the country's intellectual elite. He's a simple worker swept up by the energy of the rebellion -- as well as by the new power suddenly enjoyed by the militias made up of ordinary citizens like him.

On the other side of the checkpoint, the towers of oil refineries stretch into the sky along the Mediterranean coast. Eastern Libya is home to the country's most important oil ports, which for decades have poured billions into the pockets of Gadhafi and his clique. Gas flames burn on the tips of the refinery towers. The armed rebels say they're now in control of at least these ports, and with their grip on Libya's most important source of revenue, they will force the dictator in far-off Tripoli to his knees -- or at least that's what these mostly uncoordinated groups and militias hope.

The drive to Tobruk lasts about two hours. It is a port city with some 200,000 inhabitants. It is afternoon now, and thousands have gathered downtown. A caravan of automobiles makes its way through the crowds. Their roofs bristle with boys and young men. People wave the flag of the monarchy here, too, and it flies from burnt-out and plundered government buildings and police stations.

Local rebels fought Gadhafi's security forces for days. There were dozens of deaths. Then -- all of a sudden -- all the police and soldiers vanished.

The crowds celebrate, as if they've already won. When they catch sight of journalists or foreigners with cameras, they surround them immediately. "The people intend to kill Gadhafi," they scream. "He must pay for what he has done over the last 40 years." Almost all of them -- down to a young man with a bit of peach fuzz on his lip -- brandish pistols or knives for the cameras.

We hear shots from farther back in the convoy. Probably just demonstrators firing into the air, but you can't be sure in this mix of celebration and the anarchic chaos of a revolution that Gadhafi is still suppressing in the western part of Libya with extreme violence and brutality.

The parade inches forward. News wires report a dramatic new development: Libyan fighter pilots, ordered by the teetering regime to bomb targets in Bengazi, have opted to ignore their orders and eject from their planes. A few moments later the sound of wailing sirens can be heard throughout Tobruk. No one can say whether it's an air-raid warning or some other kind of signal. The convoy ignores the noise and pushes forward through the city. Its newfound freedom will be celebrated tonight.

The situation in Tobruk is surreal. Libyan security forces made a hasty retreat out of the eastern part of the country; but the regime could strike back just as quickly. Likewise, though Gadhafi appears to be dazed and confused, he still looked more than determined to brutally crush the uprising in the speech he delivered on Tuesday. At least part of the country's military still seems loyal to him. And no one can say for sure how many foreign mercenaries Gadhafi has brought to the country or how many he can recruit, with his millions, to fight in areas where the rebellion flares up.

A few days ago the regime apparently tried to airlift more African mercenaries into Tobruk to put down the rebellion there and in the east. Militia members claim that regime opponents fought off the attackers around the airport with clubs. They say they captured weapons and that they took many of the mercenaries prisoner.

It's hard to verify any of these stories, but one thing is true: The celebratory mood in Tobruk is a very precarious moment of freedom.