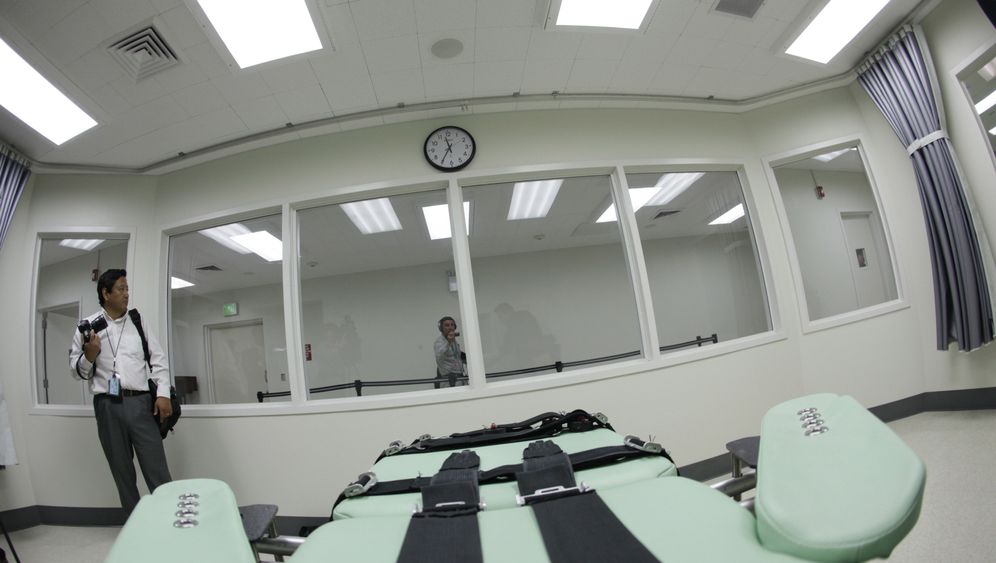 The files are piled high like gravestones in his office. Rick Halperin, 61, director of the Human Rights Program at Southern Methodist University in Dallas, has been fighting the death penalty for almost 30 years. He hasn't had a single success to date. Everyone he has fought to save has been executed, and it now seems likely that the next one will die on Wednesday -- a Texas man convicted of murder who apparently has German roots.

This shouldn't be surprising, given that Dallas is a city in Texas, a state where more people are executed than in any other US state. Governor Rick Perry, who succeeded George W. Bush in late 2000, boasts that 232 executions have been carried out in his 10 years in office. There were 152 executions during Bush's six-year tenure as governor.

So why is Rick Halperin in such a good mood? Why, as if through a sudden burst of optimism, does an "Out of Order" sign hang on the miniature model of an electric chair standing next to his desk? It's probably because fate has brought him a man whose story he hopes will give even Texans pause: Rais Bhuiyan, 37, a devout Muslim from Bangladesh.

On Sept. 21, 2001, Bhuiyan was working at a gas station in Dallas when a man approached him with a shotgun, asked him where he was from, and shot him.

The shooter, Mark Stroman, a white supremacist with a drug habit and multiple prior convictions, suffered from the delusion that his half-sister had been killed 10 days earlier in the attacks on the World Trade Center in New York. He had set out to kill Arabs, but instead ended up killing a Pakistani and an Indian. Bhuiyan, the second of the three victims, was seriously wounded but survived the shooting.

He still has the remains of 35 shotgun pellets in his head, and he is blind in his right eye. But, Bhuiyan says, his faith teaches him forgiveness. He wants the death sentence for the man who tried to murder him to be commuted to life imprisonment.

Bhuiyan's story is Halperin's strongest argument to exert public pressure on the system. In legal terms, he bases his hopes on provisions for "victim's rights" outlined in the criminal code. Bhuiyan has filed a petition to be allowed to meet with Stroman for a conversation he hopes will provide a chance at reconciliation.

Halperin and Bhuiyan are also depending on international support for their cause. They traveled to Berlin in early July to meet with Tom Koenigs, chairman of the human rights committee of the German parliament, or Bundestag. They hope that because Stroman's father was allegedly from the German state of Lower Saxony, the intercession of German politicians could help the perpetrator. Stroman is scheduled to be executed on July 20.

Even winning a stay of execution would be a success for the two activists. This is unlikely in Texas, despite the fact that in November a judge there allowed, for the first time, a debate over the constitutionality of the death penalty.

Other states are much further along. Illinois just became the 16th of the 50 US states to abolish the death penalty. And the legality of the death penalty is also being debated in Florida. Given the speed at which death sentences are carried out, the last of the inmates now on the state's death row is unlikely to be executed for another 200 years. California voters might soon have the chance to vote on permanently abolishing the death penalty.

Capital punishment is on the decline in the United States, even in Texas, where there were only 17 executions in 2010. "It's time for capital punishment to become Texas history," writes the daily Houston Chronicle.

A Lack of Drugs and Diplomatic Tensions

America's executioners, who now resort almost exclusively to lethal injection, are also hard-pressed to find new suppliers of the drugs used in the process. The only US supplier of sodium thiopental decided to stop production last fall, and on July 1 the Danish pharmaceutical company Lundbeck announced that it would restrict distribution of its drug Nembutal, so it could no longer be used for executions in the United States. Supply problems have existed for some time, and many executions have already had to be postponed as a result.

Those that do take place have prompted lengthy debate and have sometimes led to diplomatic tensions, as in the case of a Mexican man who was convicted of brutally raping a 16-year-old girl and then beating her to death. He was executed in Texas on July 7, but no one had informed him that he could have requested assistance from the Mexican government. US President Barack Obama had urged Texas authorities to re-examine the case, but they ignored his requests.

In the past, the man would have been buried and the case would have been filed away, but for weeks the media have been reporting in detail on the circumstances surrounding the execution and its consequences. The prisoner allegedly shouted "Viva Mexico!" just before the lethal injection took effect. Commentators fear that the case could trigger a serious crisis in Washington's relations with Mexico.

"Americans will always tend to repay violence with violence," says Halperin, noting that this is part of their approach to justice. "But they are slowly beginning to figure out the cost of it all: politically, diplomatically and, in the end, even financially."

Jeanne Woodford, 57, is someone who pays close attention to this issue. Woodford worked for many years as a warden at California's San Quentin State Prison, where she also supervised executions. She now works at Death Penalty Focus in downtown San Francisco, an organization dedicated to making sure that prison wardens will no longer have to perform this task in the future.

Even during her time as a warden, Woodford began having doubts over the fairness of the American judicial system. And now that she works as an activist and has been digging through the files, she is also questioning the costs of capital punishment.

According to Woodford's figures, there have been 13 executions in California since 1978. In that time, it has cost the state $4 billion (€2.86 billion) to maintain its system of capital punishment. This astronomical price tag is attributable to the high costs of research, the many appeals of capital punishment cases, and the expense associated with feeding and housing inmates on death row. Each individual execution costs $300 million, which is hard to justify in a state teetering on the edge of bankruptcy.

Woodford supports an initiative to abolish capital punishment in California. If it is successful more than one-fifth of the country's 3,200 death row inmates would suddenly have their sentences commuted to life in prison. This would mean that a former prison warden had initiated the beginning of the end of the death penalty in America.

As little sympathy as the level-headed Californian has for the radical Tea Party movement, she does agree with its supporters on one issue: the United States, with more than $14 trillion in debt, needs to save money. Even in matters of life and death.