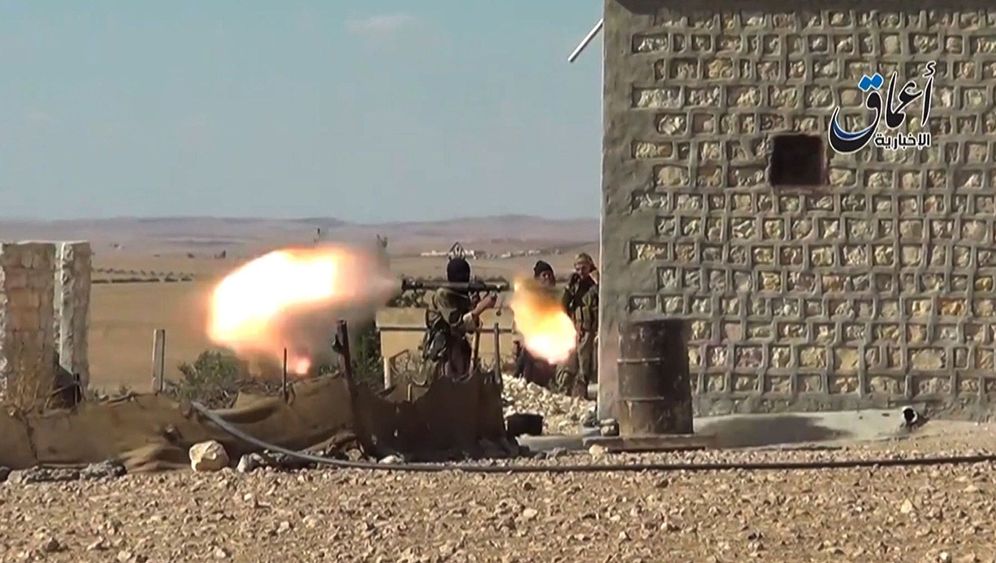 Photo Gallery: Jihad on the Web

Last Monday, the now weekly Islamic State television show pronounced its verdict on Barack Obama's latest speech about the group: "Disappointingly predictable," the anchorman intoned. "America is good, the Islamic State is bad," he said, parodying the US president's strategy. "And they will be defeated using aircraft and a motley collection of fighters on the ground."

US allies in the Free Syrian Army, he went on, were an "undisciplined, corrupt and largely ineffective fighting force." The Islamic State, the anchorman intoned, "welcome meeting Obama's under-construction army."

The speaker, pale and thin but bathed in professional lighting as he sat calmly at a table like a real anchorman, is a hostage. "Hello there," his show began, "I'm John Cantlie, the British citizen abandoned by my government and a long-term prisoner of the Islamic State." The cameras changed perspective frequently, from a frontal view to a lateral one, and zoomed in on his unshaven face. Cantlie, in effect, was speaking for his life. After about six minutes, he closed: "Until next time."

The weekly videos featuring Cantlie, in which he argues on behalf of those who likely intend to kill him, are among the most perfidious productions created by the terrorist group Islamic State. Indeed, not long after Cantlie's latest episode, Islamic State released another video, allegedly showing the beheading of Cantlie's countryman Alan Henning, a 47-year-old taxi driver and aid organization worker who was kidnapped in Syria nine months ago. He is the fourth Western hostage that Islamic State has decapitated.

In recent months, Islamic State has become known for its adept video production and its fighters are widely present on all manner of social media sites, including Twitter, Facebook, Tumblr, YouTube, Instagram and SoundCloud. If their accounts get closed down, they just register under new names.

But the group's marketing gurus do much more than simply repeat the same message ad infinitum on different platforms. They design each video and each message to correlate exactly to the target audience. For Western observers, they are cool, clean and coherent. For locals, they are bloody, brutal and fear-inducing.

When it works to their advantage, they exaggerate their own massacres. Sometimes they falsify the identity of their victims. The thousands of fellow Sunnis they killed in Syria were branded simply as "godless Shiites" on television. They even market themselves to kids, manipulating popular video games such as Grand Theft Auto V so that Islamic State fighters and the group's black flag make an appearance.

In short videos from the series "Mujatweets," an apparently German fighter talks about his supposedly wonderful life in the Caliphate. Such scenes, depicting the multicultural Islamic State brotherhood, are clearly meant for Muslims in the West. "Look here," the message is, "everyone is equal here!" The images suggest that jihad has no borders; that it brings people together and makes them happy. Other blogs include women gushing about family life in wartime and the honor of being the widow of a martyr.

Islamic State's propaganda offers something for every demographic -- it is so professionally produced that al-Qaida looks old-fashioned by comparison. It is, as the New York Times recently dubbed it, "jihad 3.0."

Their strategy is best illustrated by two almost simultaneously released videos from several weeks ago. One was produced to publicize the killing of American journalist James Foley, who had been kidnapped in November 2012. The second was likely never intended for a Western audience.

In the first, Foley's captors had him deliver a message to the world. In the soft light of morning, Foley -- dressed in Guantanamo orange -- blamed the US for his death, expressed his regret at having been born American and absolved his murderers of all guilt. After he finished speaking, the masked Islamist standing next to him placed his knife on Foley's throat and began moving it back and forth as the picture went dark.

There isn't a single drop of blood to be seen in the video, making it seem as though his on-camera beheading was merely simulated. Experts have puzzled over the meaning of the staging, given the captors later show Foley's bloody and detached head lying on his body. The most plausible explanation is that the video was designed to be tolerable for Western viewers -- its most important message isn't the murder itself, but Foley's statement and that of his murderer just prior to the beheading. Those who attack Islamic State, the hooded killer threatens, must bear the consequences. He speaks English with a British accent.

'Look At the Knife'

The second video couldn't be more different. Heavily pixelated, it depicts Islamic State fighters murdering a group of rebellious clan members not far from the Syrian town of Deir ez-Zor. It is difficult to find adequate words to describe the 11-minute movie. The victims are lying on the ground, staring upwards with eyes full of fear, before their throats are slit one after the other and their heads are chopped or torn from their torsos. Their butchers laugh as they kill, saying things like "Hey, he's really got some meat on his cheeks!" or "Hey you, you should look at the knife when I cut your head off!" The killers speak Arabic with Moroccan and Egyptian accents.

This video is aimed at a different audience, people living in the regions under Islamic State control, particularly those who might dare to resist -- such as the men from the al-Sheitaat tribe that were massacred on camera. According to various sources, up to 700 tribesmen were killed in the slaughter. And the message appears to have been heard: The tribe's sheikh responded by begging Islamic State for forgiveness and mercy.

For those against whom Islamic State is fighting, the message is always the same: Be afraid! The panicked fear they spread has become a real weapon for the jihadis, in light of the fact that they are often outnumbered by their opponents. It has worked well in many Syrian and Iraqi towns and villages. At the beginning of August, for example, Kurdish Peshmerga fighters abandoned almost all of their positions in the face of advancing Islamic State fighters.

To spread panic even further, Islamic State often exaggerates its own bloody excesses. After the battles between June 11 and 14, when Islamic State took control of Sunni areas in northwest Iraq, the group's PR division released videos of its atrocities. They claimed the clips showed Islamic State jihadists killing 1,700 pro-government Shiite soldiers in Saddam Hussein's hometown of Tikrit, a number that quickly found its way into international media reports.

But the videos, brutal as they were, showed the murder of a few dozen captured soldiers at most. People visited several large Iraqi cities on the search for evidence of the massacre, but no mass funerals or mourning ceremonies were observed. Activists from Human Rights Watch studied high-resolution satellite photos for fresh excavation sites that could indicate mass graves. They found evidence of two mass graves, and their initial study concluded that the number of dead was between 160 and 190. The group suspects that other mass graves exist, but no proof for a higher number of casualties has yet been found.

The West has tended to take Islamic State claims of barbarity at face value, primarily because it seems so unlikely that anyone would exaggerate one's own cruelty. But the Islamic State was likely trying to reap benefits from its own seeming exaggerations.

'The Law of the Jungle'

The jihadists' PR experts are adept at altering reality to best fit the message it is attempting to propagate -- either by overstating its murderousness or by changing the identities of its victims. Islamic State claims to be protecting and representing the interests of Sunni Muslims. Nevertheless, the jihadists in Syria have killed thousands of Sunnis who refused to submit to their ruthless claims to power. So as to stay on message, Islamic State propagandists simply claimed in video text that those killed were "Shiite soldiers of Assad's."

From a technical perspective, the group's digital jihad has "exponentially improved" in the last year and a half, says Christoph Günther, an Islam expert at the University of Leipzig. Since 2007, he has been monitoring the group's PR strategy. At the beginning -- before it adopted the megalomaniacal name "Islamic State" and proclaimed the establishment of a "Caliphate" -- its presentation was modest. "Earlier, the image quality of their videos was terrible," Günther says. Often, hours-long speeches in Arabic were simply uploaded to the Internet.

Today, he says, the situation has changed significantly, thanks partly to the companies that Islamic State now operates in the territories under its control. The improvements have also stemmed from the influx of foreign fighters who can now spread the group's propaganda in English, French, German and other languages.

One thing, however, remains unclear: What is Islamic State's religious message? Osama Bin Laden and his followers made an effort to justify their deeds both before and after Sept. 11, 2001, says Fawaz Gerges, a terrorism expert at the London School of Economics. "They came up with theological justifications, they pointed to the suffering of the Palestinians or they claimed they were defending Muslims." For Islamic State, though, he says, justifications hardly play any role at all. Its only message is violence and it is aimed even at their own fellow Sunnis. "There is nothing," Gerges says. "It's an intellectual desert."

For years, Gerges has been monitoring the man who claims to be Islamic State's "official spokesman." He calls himself Abu Mohammed al-Adnani and the US State Department added his name to its terrorist list on August 18. Adnani, from the northern Syrian town of Binnish, is thought to be around 37 years old and is among the earliest members of Islamic State. He is one of Islamic State leader Abu Bakr al-Baghdadi's closest confidants and was among those sent to Syria in 2011 to gain a foothold there. Today, Adnani is considered to be the right-hand man of al-Baghdadi's, the self-proclaimed Caliph. A speech he delivered after coalition air strikes against Islamic State began -- in which he called US Secretary of State John Kerry an "old uncircumcised geezer" -- was translated into seven languages.

One anecdote about Adnani is particularly insightful, Gerges says. Two years ago, Gerges relates, representatives from various Islamist groups met near Aleppo to talk about conflicts among their groups. The others agreed that a religious council should be founded to solve the conflicts in accordance with Islamic law. But the Islamic State spokesman, so the story goes, merely looked at them disdainfully. He then said: "The only law I believe in is the law of the jungle."