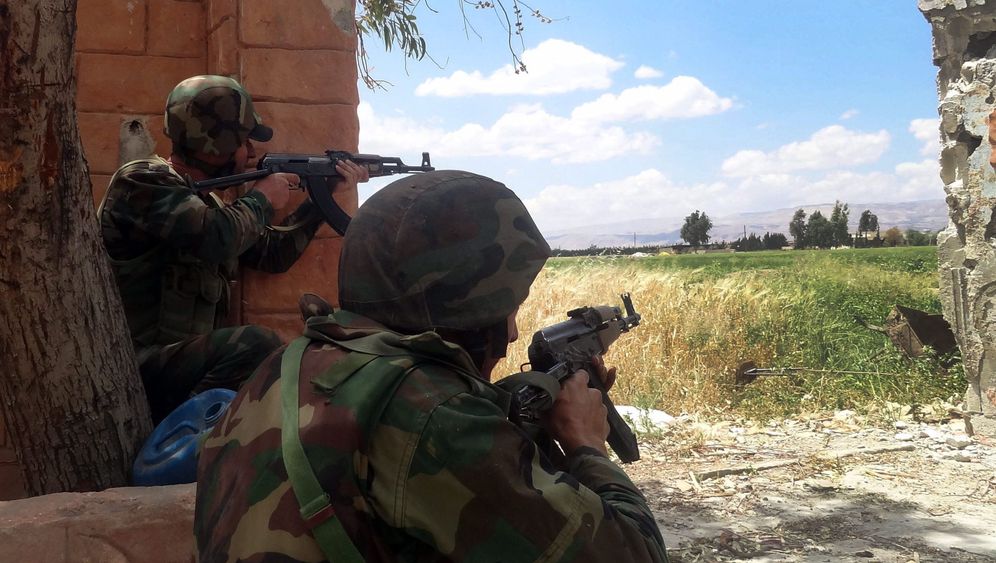 There are few foreign policy mistakes as grave as this one: A president publicly draws a red line, telling his opponent he can go this far and no further without consequences. But when that line is crossed, he does nothing.

This has been the scenario with United States President Barack Obama, who pledged to react militarily if chemical weapons were used in Syria. But when the British, the French and Obama's own intelligence agency determined "with varying degrees of certainty" that the nerve gas Sarin has been used near Damascus and Aleppo, he backpedaled.

Now, Obama appears to be faltering. But his only other option -- giving in to the increasing demands of the opposition and arming the rebels after all with high-tech weapons -- would make him look like a heteronomous gambler. The world's most powerful man has failed to lay down the law. He appears to be allowing himself to be pushed into a war he doesn't believe in. His message: No, the red line hasn't yet been crossed, we still need a Syria peace conference and then we'll see. How could it come to this?

His advisors, according to White House sources, were aghast when Obama nonchalantly spoke of a "red line." His staff had not agreed on such a far-reaching formulation, and the president apparently got carried away in the moment. The plan had been to make it clear to Syrian President Bashar Assad that he was not to deploy or move weapons of mass destruction from their storage facilities. But the public statement of a "red line" decisively changed the situation, making Obama susceptible to blackmail.

Carla Del Ponte, the former head prosecutor at The Hague who now sits on the United Nations investigative committee on Syria, voiced the "strong suspicion" last week that Syrian rebels, and not Assad, could have used the outlawed weapons themselves. White House spokesman Jay Carney disagreed, saying that it was "highly possible" Assad's troops had used them, though proof has been provided for neither claim.

Meanwhile, both sides in the civil war have an interest in such a provocation. While the rebels want the US on their side in the fight, Assad's regime could be testing the American position with the use of low-grade chemical weapons. Should Washington remain inactive, Damascus might go ahead and use nerve gas in a last-ditch effort to regain control.

John McCain, Obama's former Republican opponent, has accused the president of drawing the red line in "disappearing ink," but it's not just the usual warmongers from the right-wing who are calling for decisive American intervention in the Syrian conflict. Some Democrats have also voiced their support of military action against the murderous Assad regime. Still, hardly anyone wants a ground operation, and only a minority would support American air strikes on Syrian government sites without a UN resolution.

The suggestion of providing high-tech weapons to the Free Syrian Army is gaining support in both the US and Europe, however. It's an understandable reflex given the massacres perpetrated by Assad's thugs on the civilian population, not to mention the some 80,000 victims of the regime, although the rebels have reportedly committed atrocities, too. Who wouldn't sympathize with those who demand immediate action after all of the heart-rending scenes out of Aleppo, Homs and Damascus?

Yet humanitarian emotions don't always lead to clever foreign policy. Providing weapons to end an armed conflict would probably only work if international forces with a UN mandate were prepared to fight with the rebels, occupying the entire country in the long-term to bring about peace. Or, if someone could guarantee that the weaponry would land in the hands of liberal, democratically minded forces who were open to the desires of the US, Europe and Israel. This, however, is unlikely.

There are certainly "good rebels," some of whom have created admirable enclaves of normalcy amid the fighting. Supporting them by every means possible should be the West's priority. But a sober look at Syria reveals that radical forces are gaining influence there. In Aleppo, for example, rebels with ties to al-Qaida have taken control of the electric grid, are organizing food distribution and administering justice. Elsewhere they are controlling oil fields. Meanwhile, money from Saudi Arabia and Qatar is flowing freely. The jihadists from the Al-Nusra Front, viewed by the US as a terrorist organization, are among the strongest rebel troops.

"Nowhere in rebel-controlled Syria is there a secular fighting force to speak of," wrote the New York Times last month. "Even the Supreme Military Council, the umbrella rebel organization whose formation the West had hoped would sideline radical groups, is stocked with commanders who want to infuse Islamic law into a future Syrian government."

According to a recent poll taken by the Pew Research Center, no Middle Eastern country supports military intervention by the West, with the exception of Jordan, which is suffering a massive influx of refugees from the civil war. The Arab League, which favored intervention in Libya, has distanced itself from the US and Israel, despite being shut out of Syria by Assad. It's an illusion to believe that Russia and China, who continue to veto UN resolutions on Syria, are alone in their resistance. Whether we like or not, the world beyond the West understands the body's "Responsibility to Protect," an initiative to prevent mass atrocities, a bit differently than we do.

The situation in Syria today is strongly reminiscent of that in Afghanistan in the mid-1980s. There, the US knowingly delivered military equipment to the most effective anti-Soviet fighters. The Taliban leaders later used these Stinger surface-to-air missiles against their naïve benefactors.

This time around, the West will surely not knowingly prop up jihadists in order to bring down a dictatorship. But arming the rebels could, in the worst case scenario, turn into military aid to al-Qaida, especially when it comes to supplying missiles. The New Yorker magazine recently quoted a White House official saying: "If a US-made MANPAD were ever used to shoot down an El Al jet, I imagine some members of Congress would be having a hearing on that subject."

The usually cautious US president has also ventured out in his comments on his second large foreign policy hot spot: Iran. A few months ago, he said the US would do "what is necessary" to prevent Iran from becoming a nuclear power. The president didn't expressly speak of a red line, but his formulation came close to being an ultimatum.

Israeli Prime Minister Benjamin Netanyahu went one step further during his spectacular appearance before the UN General Assembly in September 2012. He said Tehran was only a "few months away" from having enough enriched uranium for the country's first nuclear bomb. That must be prevented by all available means, he said, and drew a red line on an outline of a bomb with a felt-tipped pen. He argued that red lines don't lead to war, they prevent war.

The threat of attacks would cause the Iranian regime to back down, he said. But Tehran has neither slowed down nor stopped its enrichment of uranium and the installation of new centrifuges. Those in power believe Israel is bluffing.

With the bomb attacks in early May on Syria, Israel's head of government was not only targeting Hezbollah -- which clearly was being armed with the newest Iranian missiles -- but also was sending a message to Tehran, namely: "Look here, we take our red lines seriously."

And Israel also was sending a message to Washington. Ami Ayalon, the former head of Israel's secret service, told the International Herald Tribune in October that if Israel didn't take action after Netanyahu's threats, it would end up looking like a paper tiger. With such a demonstration of military decisiveness, Israel is accepting the fact that it will be sharply criticized at the UN and also by possible foreign policy partners, such as Turkey. And by pouring oil on the flames in the Middle East, it risks sparking a wildfire.

Netanyahu has confided to fellow politicians that he fears nothing more than rebels close to al-Qaida getting their hands on chemical weapons. Conversely, all of the rebel groups have been extremely critical of the Jewish state. Israel finds itself in a schizophrenic position: It wants Assad's fall, but fears nothing more.

Obama's bold choice of words regarding Iran and nuclear weapons has blocked at least one of his options. Now he can no longer contain the problem. Experts at the International Atomic Energy Agency (IAEA) in Vienna consider the containment of a possible nuclear Iran as the most positive scenario. They believe that no one can longer prevent the Iranians from acquiring all of the components necessary for a nuclear weapon, and then can flip the switch at their discretion. Nevertheless, the IAEA experts also think that the powers that be in Tehran won't take the last steps to building a bomb.

Israel has never made a secret of the fact that for them the red line is crossed when Tehran has "nuclear breakout capacity" in the direction of completing a bomb. Obama's statements can hardly be understood as anything other than that he wanted to appropriate this definition. In doing so, though, he becomes a de facto hostage of Netanyahu, and a prisoner of the Iranians, who, when the economic situation comes to a crisis point again and a nationalistic fever can be re-kindled, could force him into a war of aggression with a provocative statement.

Only in a third international problem area has the US president conducted himself in a clever fashion. When it came to North Korea, he did not draw a clear red line. He warned the dictator from Pyongyang diplomatically. He called off provocative maneuvers, but openly sent his stealth bombers and aircraft carriers in the direction of South Korea. The combination of showing restraint and military muscle seems to have worked. Kim Jong Un pulled his missiles back.

There could soon be negotiations, with the help of the Chinese government, which is increasingly nervous because of North Korea's escapades. These will show whether the young dictator is crazy, or a coolly calculating power monger, and if compromises would make sense.

Theodore Roosevelt, the 26th US president, once said at the beginning of the 20th century: "Speak softly and carry a big stick." The political realist meant that one should proceed with diplomacy, and not openly threaten with military power, but rather confidently have it in the background. That would certainly achieve more than Obama's flirtation with a red line or toothless ultimatums.