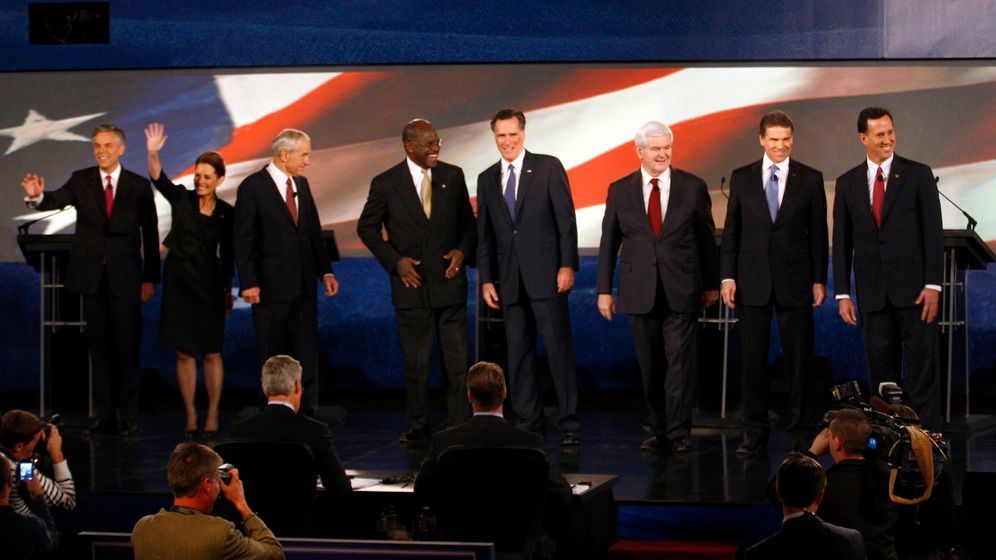 Africa is a country. In Libya, the Taliban reigns. Muslims are terrorists; most immigrants are criminal; all Occupy protesters are dirty. And women who feel sexually harassed -- well, they shouldn't make such a big deal about it.

Welcome to the wonderful world of the US Republicans. Or rather, to the twisted world of what they call their presidential campaigns. For months now, they've been traipsing around the country with their traveling circus, from one debate to the next, one scandal to another, putting themselves forward for what's still the most powerful job in the world.

As it turns out, there are no limits to how far they will stoop.

It's true that on the road to the White House all sorts of things can happen, and usually do. No campaign can avoid its share of slip-ups, blunders and embarrassments. Yet this time around, it's just not that funny anymore. In fact, it's utterly horrifying.

It's horrifying because these eight so-called, would-be candidates are eagerly ruining not only their own reputations and that of their party, the party of Lincoln lore. Worse: They're ruining the reputation of the United States.

They lie. They cheat. They exaggerate. They bluster. They say one idiotic, ignorant, outrageous thing after another. They've shown such stark lack of knowledge -- political, economic, geographic, historical -- that they make George W. Bush look like Einstein and even cause their fellow Republicans to cringe.

That may be the most appropriate description.

Tough times demand tough and smart minds. But all these dopes have to offer are ramblings that insult the intelligence of all Americans -- no matter if they are Democrats, Republicans or neither of the above. Yet just like any freakshow, this one would be unthinkable without a stage (in this case, the media, strangling itself with all its misunderstood "political correctness" and "objectivity") and an audience (the party base, which this year seems to have suffered a political lobotomy).

And so the farce continues. The more mind-boggling its incarnations, the happier the US media are to cheer first one clown and then the next, elevating and then eliminating "frontrunners" in reliable news cycles of about 45 days.

Take Herman Cain, "businessman." He sat out the first wave of sexual harassment claims against him by offering a peculiar argument: Most ladies he had encountered in his life, he said, had not complained.

In the most recent twist, a woman accused Cain of having carried on a 13-year affair with her. That, too, he tried to casually wave off, but now, under pressure, he says he wants to "reassess" his campaign.

If Cain indeed drops out, the campaign would lose its biggest caricature: He has been the most factually challenged of all these jesters.

As CEO of the "Godfather's" pizza chain, Cain killed jobs -- but now poses as the job-creator-in-chief. Meanwhile, he seems to lack basic economic know-how, let alone a rudimentary grasp of politics or geography. Libya confounds him. He does not believe that China is a nuclear power. And all other, slightly more complicated questions get a stock answer: "Nine-nine-nine!" Remember? That's Cain's tax reduction plan that would actually raise taxes for 84 percent of Americans.

Has any of that disrupted Cain's popularity in the media or with his fan base? Far from it. Since Oct. 1, he has collected more than $9 million in campaign donations. Enough to plow through another onslaught of denouements.

No Shortage of Chutzpah

Then there's Newt Gingrich, the current favorite. He's a political dinosaur, dishonored and discredited. Or so we thought. Yet just because he studied history and speaks in more complex sentences than his rivals, the US media now reflexively hails him as a "Man of Ideas" (The Washington Post) -- even though most of these ideas are lousy if not downright offensive, such as firing unionized school janitors, so poor children could do their jobs.

Pompous and blustering, Gingrich gets away with this humdinger as well as with selling himself as a Washington outsider -- despite having made millions of dollars as a lobbyist in Washington. At least the man's got chutzpah.

The hypocrisy doesn't end here. Gingrich claims moral authority on issues such as the "sanctity of marriage," yet he's been divorced twice. He sprang the divorce on his first wife while she was sick with cancer. (His supporters' excuse: It's been 31 years, and she's still alive.) He cheated on his second wife just as he was pressing ahead with Bill Clinton's impeachment during the Monica Lewinsky affair, unaware of the irony. The woman he cheated with, by the way, was one of his House aides and 23 years his junior -- and is now his perpetually smiling third wife.

Americans have a short memory. They forget, too, that Gingrich was driven out of Congress in disgrace, the first speaker of the house to be disciplined for ethical wrongdoing. Or that he consistently flirts with racism when he speaks of Barack Obama. Or that he enjoyed a $500,000 credit line at Tiffany's just as his campaign was financially in the toilet and he ranted about the national debt. Chutzpah, indeed.

Yet the US media rewards him with a daily kowtow. And the Republicans reward him too, by having put him on top in the latest polls. Mr. Hypocrisy, the bearer of his party's hope.

"I think he's doing well just because he's thinking," former President Clinton told the conservative online magazine NewsMax. "People are hungry for ideas that make some sense." Sense? Apparently it's not just the Republicans who have lost their minds here.

And what about the other candidates? Rick Perry's blunders are legendary. His "oops" moment in suburban Detroit. His frequently slurred speech, as if he was drunk. His TV commercials putting words in Obama's mouth that he didn't say (such as, "Americans are 'lazy'"). His preposterous claim that as governor of Texas he created 1 million jobs, when the total was really just about 100,000. But what's one digit? Elsewhere, Perry would have long ago been disqualified. But not here in the US.

Meanwhile, Michele Bachmann has fallen off the wagon, although she's still tolerated as if she's a serious contender. Ron Paul's fan club gets the more excited, the more puzzling his comments get. Jon Huntsman, the only one who occasionally makes some sort of sense, has been relegated to the poll doldrums ever since he showed sympathy for the Occupy Wall Street demonstrators.

Which leaves Mitt Romney, the eternal flip-flopper and runner-up, who by now is almost guaranteed to clinch the nomination, even though no one in his party seems to like or want him. He stiffly delivers his talking points, which may or may not contradict his previous positions. After all, he's been practicing this since 2008, when he failed to snag the nomination from John McCain. If it ain't broke, don't fix it.

As an investor, Romney once raked in millions and, like Cain, killed jobs along the way. So now he says he's the economy's savior. To prove that, he has presented an economic plan that the usually quite conservative business magazine Forbes has labeled "dangerous," asking incredulously, "About Mitt Romney, the Republicans can't be serious." Apparently they're not, but he is, running TV spots against Obama already, teeming with falsehoods.

What a nice club that is. A club of liars, cheaters, adulterers, exaggerators, hypocrites and ignoramuses. "A starting point for a chronicle of American decline," was how David Remnick, the editor of the New Yorker, described the current Republican race.

The Tea Party would take issue with that assessment. They cheer the loudest for the worst, only to see them fail, as expected, one by one. Which goes to show that this "movement," sponsored by Fox News, has never been interested in the actual business of governing or in the intelligence and intellect that requires. They are only interested in marketing themselves, for ratings and dollars.

So the US elections are a reality show after all, a pseudo-political counterpart to the Paris Hiltons, Kim Kardashians and all the "American Idol" and "X Factor" contestants littering today's TV. The cruder, the dumber, the more bizarre and outlandish -- the more lucrative. Especially for Fox News, whose viewers were recently determined by Fairleigh Dickinson University to be far less informed than people who don't watch TV news at all.

Maybe that's the solution: Just ignore it all, until election day. Good luck with that -- this docudrama with its soap-opera twists is way too enthralling. The latest rumor du jour involves a certain candidate who long ago seemed to have disappeared from the radar. Now she may be back, or so it is said, to bring order into this chaos. Never mind that her name is synonymous with chaos: Sarah Palin.

Correction: An earlier version of this article incorrectly stated that Rick Perry's "oops" moment took place in South Carolina. In fact, it happened in suburban Detroit.