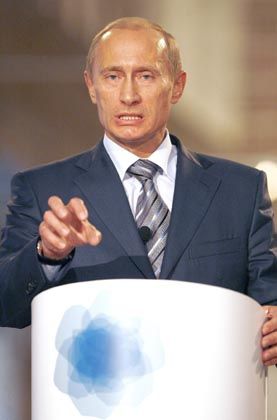 It's well known that Russian President Vladimir Putin keeps the media in Russia on a short leash. Now it looks as though his strangle-hold on power and public opinion is being extended to include international observers of the upcoming elections.

On Friday, the Warsaw office of the Organization for Security and Cooperation in Europe (OSCE) announced that it will be unable to send anyone to monitor the parliamentary elections coming up on Dec. 2.

"We have not received a single visa for the 70 observers," OSCE spokeswoman Urdur Gunnarsdottir said. "We have tried everything. ... But we sadly now have to conclude that it is not possible."

Russia's top election official, Vladimir Churov, denied that Moscow has refused the visas, and claimed the documents were waiting in Warsaw at the headquarters of the election monitoring office, the Office of Democratic Institutions and Human Rights (ODIHR). In response to the OSCE's announcement, Churov told a news conference at the Russian Embassy in Berlin on Friday, "I don't understand what could have prompted such a decision." Russian Embassy officials in Warsaw were not available to comment.

In Russia, Putin's spokesman Dmitry Peskov likewise maintained that no restrictions were placed on the observation mission. "The Russian Federation is totally complying with its obligations, as part of the OSCE," he told the AP.

Furthermore, Peskov claimed that the absence of foreign observers needn't raise concerns about the fairness of balloting. There cannot be "the slightest doubts of the legality of the electoral process in Russia," he said. "It's a purely democratic process."

Gunnarsdottir said that even if the visas were to be issued, a "meaningful" observation of the elections would no longer be possible, as the candidates have already registered and the media coverage has already begun. "Time is not running out -- time has run out for us," Gunnarsdottir told AP.

In 1990, all 56 member states of OSCE committed to having their elections monitored by international observers. The OSCE regularly organizes these missions.

and former world chess champion Garry Kasparov said, "Putin's regime has no interest in revealing its dark side." He called the upcoming elections "a mockery used by the Kremlin as a decoration to cover up the true colors of the regime."

In a meeting held before OSCE's announcement on Friday, Russian Foreign Minister Sergei Lavrov pushed for discussion of Russian-backed proposals for greater restrictions on election observer missions. Russia and other ex-Soviet countries whose elections have been viewed critically by Western observers favor limits on the numbers of observers and the extent of criticism permitted.

The OSCE and the USA have been critical of the Russian government for only allowing 300 to 400 observers into the country for the upcoming elections. Twelve hundred observers attended the last parliamentary elections in 2003, which OSCE observers called a step backward for democracy. They charged the state of employing the media and other agents to drum up support for the main Kremlin-backed party.