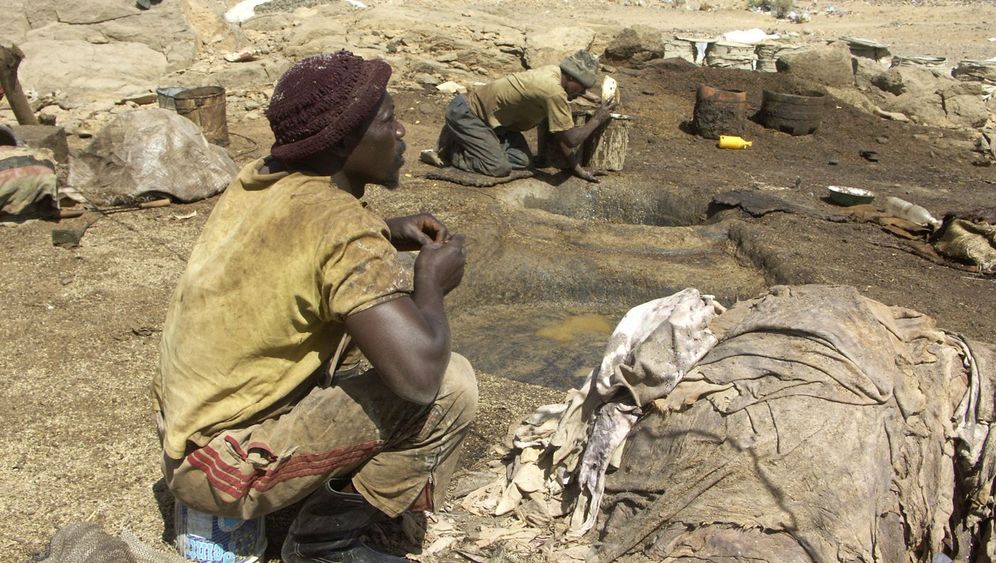 Photo Gallery: A Grueling Journey Through the Sahara

Johnson Varny is back after four months away, spent somewhere in the no man's land between Mali and Algeria. He'd been caught by the police here, who loaded him and 80 others onto the back of a truck, carting them back to Tin Sawatin. They spent two days and 700 miserable kilometers (400 miles) traveling southwest through nothing but sand and rocks. When they reached their destination -- a small collection of tin huts -- the police simply unloaded their human cargo and left them to fend for themselves.

"They treated us like animals," says Varny, 32. "One loaf of bread a day and water from a trough. They would never drink that themselves."

Yet here Varny is, back in Tamanrasset, southern Algeria, in the middle of the Sahara. He's a bit gaunter, perhaps, than he was before struggling through the 700-kilometer journey back here. He started out together with another man in Tin Sawatin, but only Varny has arrived. He says he buried his friend 40 kilometers (25 miles) short of the city, after the other man died of a burst appendix. "He didn't make it," he says simply.

Few refugees know the desert city of Tamanrasset as well as Johnson Varny does. He arrived here the first time in 1995, when he was 16 and had fled war-torn Liberia three years before. He's lost count of how many times he's been here since, both willingly and unwillingly. In 2000, he says, he made it on as far as Oran, an Algerian city on the Mediterranean coast. But before he could find a boat to take him to Europe, police caught him and deported him.

Surrounded by nothing but sand and rocks, Tamanrasset, with its population of 100,000, has been a way station for emigrants from sub-Saharan Africa for two decades. At first a few dozen people passed through the city each year, then suddenly it was hundreds, and now tens of thousands. Are they refugees, migrant workers, immigrants? Definitions are fluid here. They stay for weeks or months, often even years.

But then they move on, because ultimately, they all have the same goal: Europe, the continent that draws them north like iron filings pulled toward a magnet. Estimates say only around 15 to 20 percent actually arrive there. But these refugees don't let anything stop them from trying, not barbed wire or border guards, not bandits or the reports of the many hundreds of people who drown each year trying to cross the sea. They want to escape the hardship back home, so they chase after the dreams that satellite TV has planted in their minds.

In these 20 years, Tamanrasset has undergone an astonishing degree of development. There are paved streets now, sidewalks and electricity, entire new neighborhoods and even a university. These things were built with revenue from oil and smuggling, but also with the labor and the millions in cash left here by the city's short-term guests.

The last residential neighborhoods at the western edge of the city give way directly to the desert. Another kilometer further out, slightly uphill from the city, is where the undocumented immigrants live. They have a few blankets, which get rolled up and stored under rocks during the day. There's some firewood and a couple of cooking pots, water bottles and a great deal of garbage. Other than that, they have no possessions beyond their own miserable living conditions.

No governments or aid organizations provide help. Algeria doesn't want to support migrant workers. A few good-hearted nuns occasionally bring blankets, an Italian organization donates money for medications and two or three doctors at the hospital will treat patients for free. There's no aid beyond that.

Varny coughs. He has tuberculosis and needs medication to treat it, but how is he supposed to pay for that? He, too, is living out here by the rocks. His entire group sleeps out here. In the mornings, they slip into the city, where they carry stones, paint walls or bake bricks. Or they simply wait. Even when they find work, it doesn't always go well. "You work for an Arab, for days, for weeks, and in the end, instead of giving you the money, he calls the police," Varny says.

Once they've saved enough money for their onward journey, these refugees could choose to board a bus for a comfortable ride to Algiers. Instead, armed with a bit of bread, a few cans of food and a water canister, they climb aboard a truck in the back courtyard of a building, setting out at night to avoid patrols. Once outside the city limits, the driver leaves the paved road and trundles northward on dirt tracks.

The journey to Morocco costs €4,000 ($5,000), Varny says, or €6,000 including the crossing to Spain, and Nigerians have a firm hold on this line of business. Women have it easier, he says, though there's the not insignificant drawback that they have to work off their debts in Spanish brothels.

Hundreds of thousands of people come northward hoping to scale the battlements of Europe, the old continent that's intent on building its walls ever higher, even considering using drones, offshore sensors and satellite-driven search systems to fend off this onslaught. The EU plans to spend up to €2 billion on new security systems at its external borders.

But that won't stop the immigrants, who start their journeys on the Ghanaian coast, in the villages of Côte d'Ivoire or in capital cities such as Kinshasa. In many cases, an entire family pools its resources, or even an entire village. Often it's the first-born in a family who sets out, sensing an inner obligation to seek out adventure. More than anything, though, they want to escape the miserable conditions they're leaving behind.

Parfait, 36, is also a refugee. His health is poor and his breathing shallow -- he too has tuberculosis. Like most undocumented immigrants in Tamanrasset, he's reluctant to talk. The city is a great gathering point for broken, mistrustful people. "You have everything you need, I have nothing and I need medicine," he wheezes. Eventually, for a couple of dinar, he provides information, offered discreetly at the home of an acquaintance.

Ten years ago, he says, he left Cameroon with about €200 in his pocket. He'd saved up €30, and his family contributed the other €170. Just the difficult journey through Chad took a year and a half, before he finally arrived in Benghazi, Libya. He's seen everything, from trucks that got stuck in the Saharan sand to police checkpoints where anyone who couldn't pay was beaten, and he's survived attacks by bandits.

These days, Parfait takes a sober view of things. "There are always some people who die," he says.

Still, he managed to find work in Benghazi, thanks to his training as an electrician. He earned the money he needed for the crossing to Lampedusa, which would take 16 or 18 hours by boat, at least by optimistic estimates. But suddenly Parfait didn't want to go anymore. "I got scared," he says. He'd heard too many stories of unreliable people smugglers, capsized boats and friends gone missing.

Parfait turned back. After a few months at home in Cameroon, he made a second attempt, through Mali this time, paying €65 to cover the 1,200 kilometers (750 miles) of desert from Gao to Tamanrasset in a pick-up truck. Halfway there, the truck was held up by robbers. Parfait lost his mobile phone and €300.

Twice he made it as far as Algiers, and twice the police caught him and transported him the 2,000 kilometers back to the border. He's been in Tamanrasset now for three months, where he hopes to recover from his illness and earn some money. Or perhaps those two things, but in the reverse order, because how is he supposed to get the medication he needs without money?

Tamanrasset is one of the few stopovers for refugees from sub-Saharan Africa, because there aren't many options when it comes to crossing the Sahara. And since the civil war in Libya closed off that route to the Mediterranean, only two other possibilities remain. One way is to follow the western coast of Africa through Senegal and Mauritania to Morocco, then cross the sea to Spain. The other way is to try crossing the Sahara through the middle, a route that passes through Tamanrasset.

A two-tiered society has developed here. On the one hand, there are migrant workers from neighboring Mali and Niger. These are the visible immigrants, the ones who don't need a visa and are here in Algeria legally. Hundreds of these men hang around the city's benches and walls, waiting today, waiting tomorrow, always waiting for work.

Then there are the others, the invisible immigrants, the ones from the Congo or Ghana, Nigeria or Sierra Leone, who have come here without documents and live in fear of the police. They do the best they can to hide, and they don't want to talk about their experiences.

Parfait wants to go to Spain, he says, because his daughter is in Bilbao. She's six years old, and he only knows her from pictures and phone calls. He's never seen her or held her in his arms. Her mother managed the crossing several years ago. Parfait says he sent them money twice, but then stopped -- it's a difficult relationship.

Yet despite all of these dramas, the refugees don't want to go back. Or they can't go back: The dishonor would be too great, their failure too obvious. After starting out full of expectations, both their families' and their own, how can they show up again empty-handed, never even having set eyes on Europe?

So they find themselves blown about like drifting Saharan sand, partly because they know so little about Europe. In the best cases, they have a friend or a relative there, or at least a telephone number they can call when they arrive. But in most cases, they have and know nothing at all.

For these refugees, Europe is a secret cipher that stands for their dreams of a better life, for work and education and wealth. Europe is the promised continent they know from TV, where African soccer players can make it big, where supposedly there are jobs for everyone and always enough food, hospitals and good schools.

Hardly anyone in Tamanrasset has heard of Lampedusa, the Mediterranean island that lies close to Africa, but belongs to Italy, and has been struggling to handle an increasing number of refugees. They have even less of an idea of what to expect in Europe. And few of them has ever studied a map.

"I hope I can find job training, and work," Parfait says. He pauses, then adds, "I'm hoping for a lot of things." He isn't allowing himself any doubts. "I'm sure you have difficulties too," he says. "But they're different difficulties from the ones we have."

3 Bilder Photo Gallery: A Grueling Journey Through the Sahara