"No one can imagine what it's really like," says Jill Price, 42, "not even the scientists who are studying me."

The Californian, who has an almost perfect memory, is trying to describe how it feels. She starts with a small demonstration of her ability. "When were you born?" she asks.

She hears the date and says: "Oh, that was a Wednesday. There was a cold snap in Los Angeles two days later, and my mother and I made soup."

Price is sitting in The Grill, a restaurant in Beverly Hills. She's a heavyset woman with blonde hair and big blue eyes. She wears large amounts of jewelry -- gold Creole earrings, silver bracelets and a Star of David dangling from her necklace, which she often rubs with her fingers as she talks. Price runs a religious school at a synagogue near Los Angeles.

She says the restaurant has been one her favorites for the past 23 years -- since Sept. 20, 1985, to be exact. It was a Friday. "And I was sitting with my father at that table over there, eating garlic chicken. I was wearing a big hat."

On this Wednesday she orders a whitefish filet with creamed spinach and a soda, yet another immaterial detail she will now remember forever. The words uttered during the meal, the face of her dinner companion, the red notebook, the green glass lamps on the table, the grey-haired waiter's polite reserve -- all of it will be etched for good in her memory, and she can do nothing about it.

Price can rattle off, without hesitation, what she saw and heard on almost any given date. She remembers many early childhood experiences and most of the days between the ages of 9 and 15. After that, there are virtually no gaps in her memory. "Starting on Feb. 5, 1980, I remember everything. That was a Tuesday."

She can also date events that were reported in the media, provided she heard about them at the time. When and where did the Concorde crash? When was O.J. Simpson arrested? When did the second Gulf war begin? Price doesn't even have to stop and think. She can effortlessly recite the dates, numbers and entire stories.

"People say to me: Oh, how fascinating, it must be a treat to have a perfect memory," she says. Her lips twist into a thin smile. "But it's also agonizing."

In addition to good memories, every angry word, every mistake, every disappointment, every shock and every moment of pain goes unforgotten. Time heals no wounds for Price. "I don't look back at the past with any distance. It's more like experiencing everything over and over again, and those memories trigger exactly the same emotions in me. It's like an endless, chaotic film that can completely overpower me. And there's no stop button."

She's constantly bombarded with fragments of memories, exposed to an automatic and uncontrollable process that behaves like an infinite loop in a computer. Sometimes there are external triggers, like a certain smell, song or word. But often her memories return by themselves. Beautiful, horrific, important or banal scenes rush across her wildly chaotic "internal monitor," sometimes displacing the present. "All of this is incredibly exhausting," says Price.

And so it can happen that Price, as she sits in this restaurant, suddenly feels like a four-year-old girl again, who was supposed to visit the makers of "Sesame Street" at a studio with her kindergarten class. Her father, an agent who represented the creator of the Muppets, had organized the outing. But when the date approached, Jill contracted tonsillitis and was unable to go along.

"In retrospect, I know, of course, that it was not a big deal," she says, nervously twisting her necklace. "It sounds ridiculous, but when I remember it I experience that same boundless disappointment and rage that I felt back then as a young child."

Can someone who cannot forget even fall in love? Can they forgive, either others or themselves? Price's life has had its share of suffering, including family strife, her mother's cancer and, later, the sudden death of her husband Jim. Because she was hounded by bad memories, grew depressed and feared that she was going crazy, she sat in front of her computer on June 5, 2000 (a Monday) and typed a single word into Google: memory.

That was how Price found James McGaugh, and became part of a scientific case study.

McGaugh, 76, looks like a friendly, mischievous grandfather. He makes wooden rocking horses for his grandchildren. He plays the clarinet and saxophone in jazz bands. He is also one of the leading experts on memory in the United States. He founded the Center for the Neurobiology of Learning and Memory at the University of California in Irvine, and he's written more than 500 academic articles and several books. The walls of his office are covered in awards and decorations. Like many a leading scientist of his age, he has no plans to retire.

"I was skeptical, of course, when Jill told me her story," says McGaugh, a slim, grey-haired man with glasses. "But I've spent most of my life studying the mechanisms in the brain that are associated with the development of lasting memories. So I thought that I should at least meet the woman." 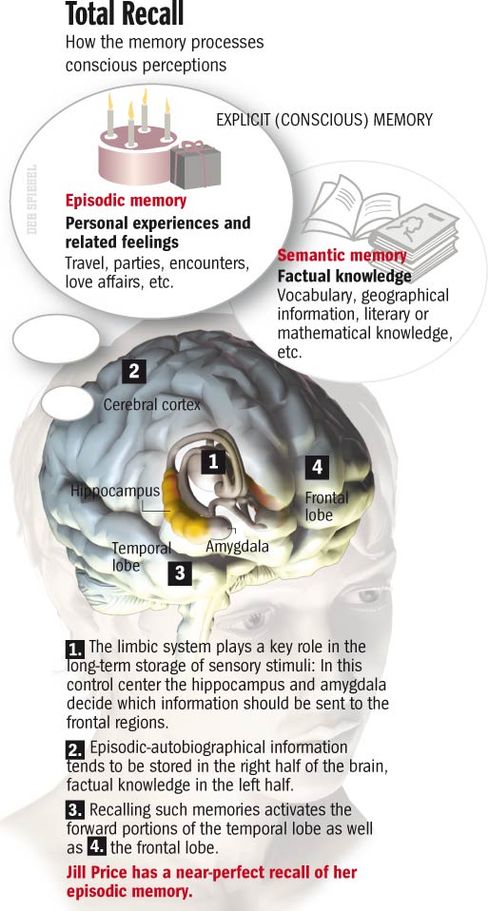 Total Recall: An Anatomy of Memory

McGaugh and his staff realized they were looking at an exotic case, perhaps even a scientific sensation. For that reason they took a thorough approach, and for five years they subjected Price to batteries of neuropsychological tests, combed the professional literature for similar cases and developed special questionnaires to allow them to test her memory.

Once she was asked to write down the dates of all Easter holidays from 1980 to 2003. "It took her 10 minutes, and she only got one of the 24 dates wrong, where she was off by two days," says McGaugh. He had Price repeat the test two years later, and the second time she got all the dates right. "I thought that was especially impressive," says McGaugh, "because she is Jewish. Easter means nothing to her."

The scientists were able to verify her autobiographical data because she has meticulously kept a diary since the age of 10. She has filled more than 50,000 pages with tiny writing, documenting every occurrence, no matter how insignificant. Writing things down helps Price organize the thoughts and images shimmering in her head.

In fact, she feels a strong need to document her life. This includes hoarding every possible memento from childhood, including dolls, stuffed animals, cassette tapes, books, a drawer from dresser she had when she was five. "I have to be able to touch my memories," Price explains.

McGaugh and his colleagues concluded that Price's episodic memory, her recollection of personal experiences and the emotions associated with them, is virtually perfect. A case like this has never been described in the history of memory research, according to McGaugh. He explains that Price differs substantially from other people with special powers of recall, such as autistic savants, because she uses no strategies to help her remember and even does a surprisingly poor job on some memory tests.

It's difficult for her to memorize poems or series of numbers -- which helps explain why she never stood out in school. Her semantic memory, the ability to remember facts not directly related to everyday life, is only average.

Two years ago, the scientists published their first conclusions in a professional journal without revealing the identity of their subject. Since then, more than 200 people have contacted McGaugh, all claiming to have an equally perfect episodic memory. Most of them were exposed as fakes. Three did appear to have similarly astonishing abilities. "Their personalities are very different. The others are not as anxious as Jill. But they achieve comparable results in the tests," McGaugh reports.

The subjects do have certain compulsive traits in common, says McGaugh, especially compulsive hoarding. The three others are left-handed, and Price also showed a tendency toward left-handedness in tests.

What does this mean? McGaugh is cautious. "For now, we are just describing what we see."

'Bigger Than I Am'

In neurobiological terms, a memory is a stored pattern of links between nerve cells in the brain. It is created when synapses in a network of neurons are activated for a short time. The more often the memory is recalled afterwards, the more likely it is that permanent links develop between the nerve cells -- and the pattern will be stored as a long-term memory. In theory there are so many possible links that an almost unlimited number of memories can be permanently stored.

So why don't all people have the same powers of recollection as Jill Price? "If we could remember everything equally well, the brain would be hopelessly overburdened and would operate more slowly," says McGaugh. He says forgetting is a necessary condition of having a viable memory -- except in the case of Price and the other three memory superstars.

For McGaugh, there is another reason why people with such phenomenal memory are so puzzling. They challenge a theory on which his research has been based for the last half a century. This theory, based on clinical observation, says memories are stored in greater detail and with more staying power when they are tied to emotion.

Sensations are emotionally processed in the amygdala, a specific part of the brain's limbic system. There, and in the hippocampus, decisions are made as to which information should remain in long-term memory. The more powerfully the amygdala is activated, the greater the likelihood of a permanent memory. "But now here we have these four people who seem to violate this principle, because they also remember the most banal and inconsequential things," says McGaugh. He sighs. "I myself still can't remember when Bing Crosby died, even though I must've read it five times by now."

McGaugh, together with colleague Larry Cahill and researchers at Harvard University, is currently evaluating nuclear magnetic resonance images of the four subjects' brains. The scientists have already discovered a few structural peculiarities, which they plan to publish soon. About two dozen areas in the brain of their miracle woman are apparently larger than in an average person.

One day Jill Price hopes to learn more about what makes her so different from other people. Perhaps she can also contribute to significant advances in the study of memory.

"At least working with scientists gives some meaning to my condition," says Price. And then she says something that sounds surprising, coming from a woman whose thoughts loop constantly around in her head. "This is bigger than I am."