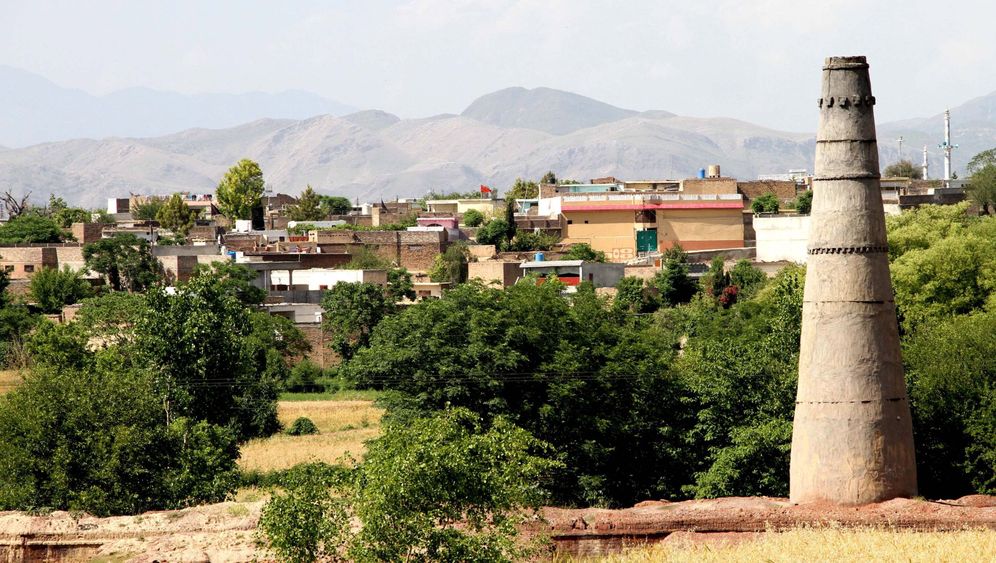 It is a big day for the village residents. Until recently Chak Shah Mohammad was one poor Pakistani settlement among thousands, but suddenly it has become the focus of world's media. Amal Ahmed Abdulfattah, Osama bin Laden's youngest widow, reportedly said during questioning that her husband and family lived in the settlement from 2003 until late 2005. They upgraded to the large house in Abbottabad, where US Special Forces found and killed the erstwhile al-Qaida head a week ago.

"Look," says Mohammed, a nine-year-old boy and nudges his friend with an elbow. The two watch a Chinese reporter who is interviewing a local man. "They really do have eyes like that," he says. "I wonder if she can do Kung Fu," whispers the other boy. The two laugh before heading over to where an American is filing his report from Chak Shah Mohammad, holding an absurdly large microphone. Another group of children runs after an Australian journalist as she heads to the cave where bin Laden is said to have hidden.

The caves, with tunnel like rooms dug into the stone, are deserted. They remain cool, even in the summer when temperatures outside soar above 45 degrees Celsius (113 degrees Fahrenheit). "They used to be our homes," a shepherd says. "But gradually people started building clay houses. No one lives in these caves anymore."

The caves are known as bora. A journalist suspects that there must be a link between the word bora and Tora Bora, the place in Afghanistan to which bin Laden fled in 2001 following a US-led bombing campaign. An interpreter translated her suspicion and the villagers start to laugh. "We have caves and they have caves too," says one. "Does that mean that we will be bombed next?"

Not a single person in the village says they have ever seen bin Laden. Many of them don't even know of him: they haven't ever heard his name and wouldn't recognize him if they saw him. Time stands still in Chak Shah Mohammad -- and the clock stopped long before 9/11. There are no phone lines, no Internet connection and no cable television. People use antennas to receive blurry images from a few channels. When they want to use the phone they ask someone who owns a mobile. Reception is dreadful.

The residents of the village give the same reply over and over again: No we don't know bin Laden and, no, we don't know where he lived.

They will likely have to repeat the answers many more times as more and more reporters turn up. Sunday, too, saw several journalists arrived from Abbottabad, an hour's drive to the north. A few shiny white cars have also rolled in from Islamabad, 90 minutes to the south. The world's most wanted terrorist, it would seem, didn't stray far from the Pakistani capital.

Chak Shah Mohammad lies a few kilometers off the main road in the Haripur district of Khyber Pakhtunkwa province, which has long been a hotbed of terror. Only one small sign in Arabic points to the village. It is a sparsely populated region, approximately 1,500 people live here. "We have some 250 houses," says Deputy Mayor Qazi Shaukat. He doesn't count the caves as no one lives there anymore. People in Chak Shah Mohammad are poor. They mostly earn their keep by working as day laborers in nearby fields or in a brick factory.

First Foreigners in the Village

"It would be good if you could report to the world the problems we face," says an old toothless man. "There is no running water in our houses and we only have electricity for a couple of hours a day. Can someone help us please?"

Another man tells him to stop complaining, adding that reporters are here because of bin Laden. "Oh Bin Laden, who's interested in him?" the old man retorts. "Now we have a chance to tell people about our problems. I think it is the first time in history that foreigners have ever come to our village."

Other village residents use the opportunity to earn some money. Some young men tour foreign reporters around the village for a couple of rupees. Others sell bottles of water and lemonade. A couple of older men ask for money in exchange for their theories. "It could be that bin Laden came here from the Swat Valley. It isn't far," one man says. Another speculates that people didn't notice him because he was dressed as a vagabond: "There are plenty of Afghan refugees living in tents and caves around here." A third man says "I don't believe that the man who is the focus of intelligence services and journalists ever lived here."

Some say that soldiers and intelligence services arrived at the village on Friday, combing the area and questioning locals. Security authorities declined to comment.

But most locals do not rule out that bin Laden may have lived in the region. They have heard that he allegedly lived for more than five years in central Abbottabad, less than a hundred meters from a high-security military academy. They have also heard of videos showing bin Laden in his spartanly furnished residence. "Then it is also possible that he was here in Chak Shah Mohammad," said one trader.

But all in all, the bin Laden fanfare has been more fruitful for local children than for international journalists, who have been able to dig up little new evidence that the terror boss ever lived here. Given the world's sudden interest in this small poor village, local children were given time off school.