Its atmosphere is stiflingly hot, with temperatures generally hovering around 800 degrees Celsius (1,470 degrees Fahrenheit) -- in the shade. The air is filled with billowing clouds of highly toxic gas.

Anyone setting foot on this faraway planet would die a speedy death. Nevertheless, the recently launched study of HR 8799 c is a breakthrough in the search for extraterrestrial life. 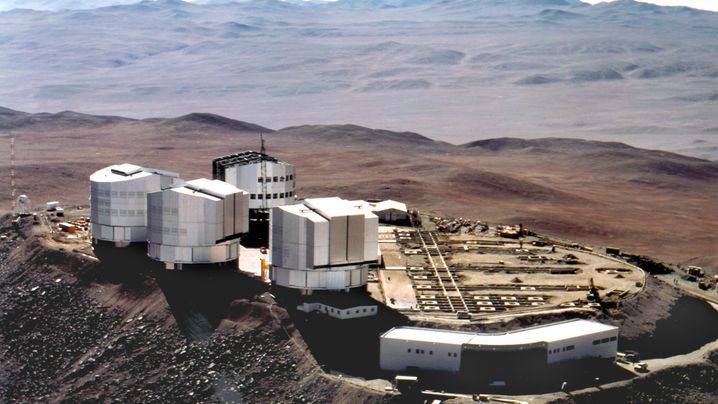 Astronomers unveiled a groundbreaking achievement in the field of metrology last week. By measuring the spectrum of light coming from HR 8799 c, they have managed to determine the chemical composition of its atmosphere. "For the first time, we have directly obtained the spectrum of a planet outside our solar system," says study co-author Wolfgang Brandner of the Max Planck Institute for Astronomy in Heidelberg.

Nowadays, the discovery of planets outside our solar system has become practically routine. In recent years, scientists have discovered more than 400 of these so-called exoplanets. But in most cases, their existence could only be proven indirectly, for example, by virtue of the fact that they cause a slight weakening in the light emitted by a much brighter star.

Only with the help of the world's most advanced observatory, and the European-run "Very Large Telescope" (VLT), did it become possible to directly capture the weak light coming from a planet and analyzing it using spectroscopy. The massive telescope is located on a 2,600-meter (8,528-foot) peak in Chile's Atacama Desert.

After nightfall, the robotic eyes come to life on the mountain, known as Cerro Paranal. Four giant domes, as outlandish as the stone sculptures on Easter Island, are silhouetted against the evening sky. The steel giants begin moving almost inaudibly, as the domes, each a 400-ton maze of cables and supports, ladders and steps, perform a mechanical ballet.

Each of the VLT's four main mirrors has a diameter of more than eight meters. They are the most sensitive devices designed to peer at the sky ever built by human hands, so powerful that they could pinpoint the light coming from a car headlight on the moon. One of their most important objectives is the search for a second Earth -- and for extraterrestrial life in space.

"What we are currently experiencing is the emergence of a new conception of the world," says Michael Sterzik, "comparable to the sea change that occurred when Copernicus described how the earth revolves around the sun." The astrophysicist climbs down the steps of the VLT and locks the door from the outside. His presence would only disturb the images. He is the head of operations at the European Southern Observatory (ESO), which operates the VLT as part of a consortium of 14 European countries.

Life in the Universe

The Atacama Desert is one of the driest places on the planet, which makes it ideal for obtaining a clear view into outer space. To avoid disturbing the measurements at the observatory, drivers are required to shut off their headlights and crawl, with only their parking lights turned on, up the serpentine access road, which is lined with nothing but reflectors. In October, planet hunter Brandner spent four nights at the observatory to align the telescopes with HR 8799 c. "It is now possible to control many observations via the Internet," he says, "but our project was so experimental that we had to be on-site all the time."

The late summer heat is currently shimmering above the giant, artificial eye. The telescope mirrors have to be recoated every 18 months because of the abrasive effect of dust storms. There is no sound of birds singing, and the only sign of life comes from the parched-looking desert plants that claw their way through the gravel. The extremely dry air, with humidity levels that are sometimes lower than 4 percent, burns the eyes and causes the skin to crack open.

The reddish, rocky desert around the VLT seems strangely familiar, reminiscent of images taken on Mars, a sterile, desert-like planet. Ironically, it is in this inhospitable place that scientists are searching for life in the universe.

A tunnel leads down to the guesthouse, half of which is buried underground to protect against the brutal desert climate. Tanker trucks deliver 55,000 liters of drinking water every day. The building has the futuristic look of a space station.

Living on Cerro Paranal is everything but glamorous. The staff works at night and sleeps during the day. The nearest city is several hours away, and alcohol is banned at the facility.

The planet hunters working with Wolfgang Brandner were initially dogged by bad luck. First the sky was overcast, and then moist layers of air obscured the view. It was only during their last night at Cerro Paranal that the scientists were lucky. For five hours, the telescope mirror followed the faraway planet as it moved across the sky in the constellation Pegasus, invisible to the naked eye.

After a long night of observation, Brandner had accumulated enough data to produce a portrait of the planet. His team packed their bags, flew home and went to work analyzing the data. The results were astonishing.

HR 8799 c is a young, hot giant planet, a cosmic teenager less than 60 million years old and more than 3,000 times as heavy as the Earth. But on Brandner's images, the fiery giant looks more like a tiny, forlorn little dot in space. The planet is 130 light-years away from the Earth, which means that the light being captured today has been traveling since 1880 and has been weakening ever since.

"Capturing an image of it was almost impossible, because the star around which the planet revolves is brighter by several orders of magnitude," says Sterzik. "For every particle of light coming from the planet, there are thousands coming from its central star." The astrophysicist likens the challenge to observing a candle burning next to a 300-watt spotlight two kilometers away.

The chemical analysis of a hot giant using the VLT has been technically possible for several years, but scientists had not found a suitable object worth observing -- until about a year ago, when a competing team from Canada discovered the promising planetary system that includes HR 8799 c.

When the ESO researchers analyzed the chemical fingerprint of the young gas giant, they made a surprising discovery: The methane in the gas shield appears to be combined with unusually high levels of carbon monoxide. "Carbon monoxide is normally found only in lower atmospheric layers and is thus invisible to us," Brandner explains. "The fact that we see it around HR 8799 c could mean that there are violent storms raging on the planet."

The evidence of gas storms on the giant planet would be an important step in the search for extraterrestrial life forms. It would allow scientists to visualize the weather, climate and even seasons of an exoplanet. But the long-term goal is still to study a small planet with pleasant temperatures that resemble our Earth. Only when scientists are able to discover telltale traces of, for example, ozone or water vapor in the atmosphere of a planet will they have found signs of the possible existence of life.

But the smaller and colder a planet is, the more difficult it is to capture its light. Even the VLT is still only capable of detecting hot, giant objects.

To address this need, scientists at ESO headquarters in Garching, near Munich, are already planning a successor to the VLT that would be five times as big and many times as powerful: the "Extremely Large Telescope" (ELT). Negotiations are currently underway with Chile and the ESO member countries.

A nearby mountaintop within view of Cerro Paranal is already being investigated as a possible site for the ELT -- a lifeless, windswept mound of rock that could serve as the starting point for finding life in the vast expanse of the universe.