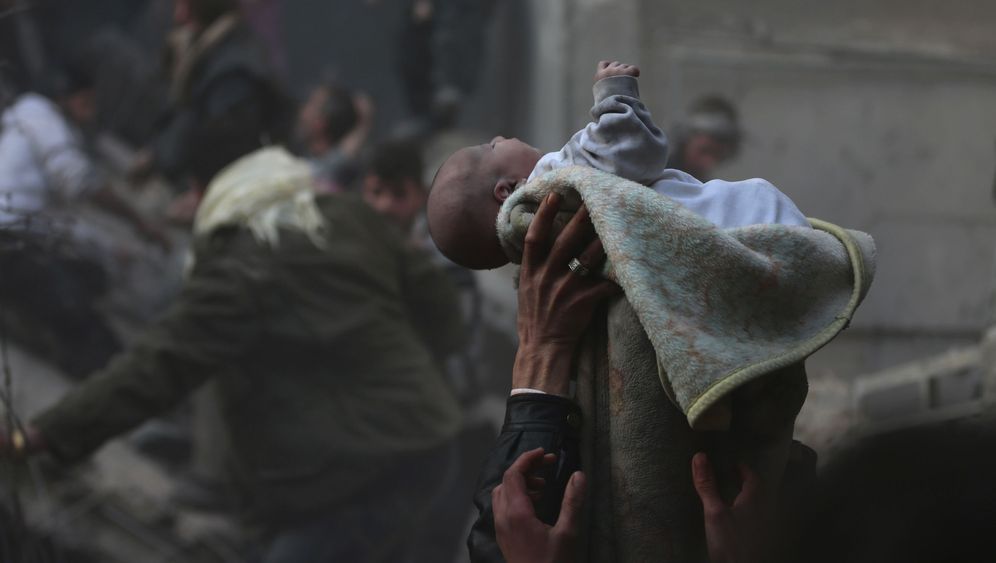 A bag filled with pieces of bread is dangling from a pole jutting from a house in the Damascus neighborhood of Yarmouk. Rebels control the neighborhood, but the Syrian army has had it sealed off from the outside world for months. The rebels suspect that the bag of bread is bait, part of trap designed to lure starving Yarmouk residents out into the open -- and into the range of fire of army snipers.

Dozens have already died of starvation in Yarmouk. The last remaining cats, birds and dogs were eaten long ago. Cactus leaves and grass are still growing. Bread would be a luxury.

Putting out bait for starving civilians is a despicable tactic. But barbaric methods have been commonplace in the Syrian war for some time, partly because it's a conflict that neither side can currently win. To resolve the stalemate, representatives of the government and the rebels will begin seeking a political solution in talks set to begin on Wednesday in Montreux, Switzerland. There have also been talks behind the scenes, both between the two sides and between the United States and Russia. Still, civilians are now even worse off than before.

"It's to be expected that both sides would try to strengthen their initial position by military means prior to negotiations," says a Western diplomat in Washington involved in the preparations for Montreux. But the wave of attacks being launched by the army, which has been dropping so-called barrel bombs -- barrels filled with explosives and metal fragments -- onto the city of Aleppo from helicopters, is pure terror, adds the diplomat.

"Most of all, by doing this (President Bashar) Assad is making it all but impossible for the opposition to get to the negotiations. It's the most murderous form of creation of political value," says the diplomat. The rebels, he says, will lose their popular support if they negotiate with a regime that is taking such a drastic and murderous approach.

Washington and London, on the other hand, have threatened to freeze the already scant aid they provide to the opposition should they not appear. After almost three years of violence, 130,000 dead and appeals that fall on deaf ears, it seems that many in the West view the mere fact that the conference is taking place as a success, regardless of its outcome. "The important thing is to start negotiating," says a German diplomat. "No one has had any better ideas."

Talks notwithstanding, top regime officials in Damascus are beginning to feel nervous, which likely has to do with the precipitous decline of the al-Qaida linkedIslamic State of Iraq and al-Shams (ISIS). Thus far,Assad has tried to impress upon Western governments and intelligence services that his regime is the lesser evil. His mantra has been that if his regime falls, al-Qaida will take over the country.

For a few months at the end of last year, it did seem as if the ISIS combatants could gain control over large parts of northern Syria. But then, after fierce fighting in January, the Syrian rebels forced ISIS out of Idlib in northwestern Syria. Now the rebels continue to fight on two fronts: against Assad's troops and against the al-Qaida extremists who have retained control over the provincial capital of Rakka.

Regime troops, on the other hand, have conspicuously avoided attacking the al-Qaida linked fighters. When ISIS was fighting the rebels in the towns of Jarabulus and Anadan, for example, Assad's air force bombed the rebel positions but not those of the al-Qaida fighters. In addition, government aircraft have for weeks been heavily bombarding residential neighborhoods in Aleppo, and yet neither the local ISIS headquarters nor the organization's other strongholds have been struck, despite being clearly recognizable from the air.

What the threat posed by the al-Qaida affiliate has done is prompt the large rebel groups in Syria, encouraged by Saudi Arabia, to join forces.

Following what is expected to be an unsuccessful first round of negotiations, several options will be available. If Washington adheres to its strategy of forcing the opposition to reach an agreement with Assad, the war will continue. Regime forces are playing for time and expect to emerge victorious, while the rebels feel newly strengthened by their unity. No one is likely to give up soon.

A second option has quietly taken shape on Lake Geneva. Since October, influential Syrians on both sides have been meeting at Château de Bossey near Geneva to search for solutions. The talks were arranged by the Swiss Centre for Humanitarian Dialogue, which has explored compromises in Sudan, Indonesia, Nepal and other countries, with varying degrees of success -- and without the crippling effect of government negotiating machinery. United Nations Under-Secretary-General for Political Affairs Jeffrey Feltman, an American, and UN Special Envoy to Syria Lakhdar Brahimi, of Algeria, have been consistently in the picture during the current talks.

It was a tricky experiment in which people close to the regime and the rebels sat face-to-face and eventually found common ground.

"We fought on the first day, talked to each other on the second day and went shopping together in Geneva on the third," says one participant. "Then a former adviser to Assad said, okay, we're going to fight each other to the last building in Damascus, but what then? The country will be ruined, and neither side will emerge victorious or be able to stop fighting."

The killing will only end, says the man, if the United States and Russia come to an agreement. And the fighting is unlikely to stop unless the two nations exercise their authority, partly because foreign interests dominate the situation in Syria.

"The Saudi Arabians and the Qataris are using our revolution in their proxy war against Iran," says one of the opposition members at the Swiss chateau.

"The Iranians and Hezbollah treat us like their colony," complains a delegate for the regime, which is being supported by Iran, Iraq and Hezbollah, and would lose the war without their military aid.

While negotiations were underway at Château de Bossey, there were also talks between Washington and Moscow. Both sets of negotiations revolved around the same model for achieving a peace treaty: The Syrian government, army and notorious security forces would remain in place, while military power would be transferred to an extremely difficult merger of the army and rebel groups. Assad would be sent into exile or would lose his effective power. It would be a starting point.

The decision as to whether to pursue the model apparently lies currently with Moscow. An insider familiar with the talks says that to secure the Kremlin's approval, any future Syrian regime would likely have to guarantee continued military cooperation with Russia and the repayment of billions in Syrian debt. It would also have to ensure that an agreement reached with Moscow in late December on the exploration of oil and natural gas deposits off the Syrian coast be upheld.

It is not very likely that all parties will agree to this model. According to a member of the Damascus elite who emigrated from Syria, there is one potential obstacle: "The intelligence chiefs won't allow Assad to leave, unless they receive the same exile guarantees for themselves and their families."