It was probably the last attempt to defuse the nuclear dispute with Tehran without having to turn to dramatic new sanctions or military action. The plan, devised at the White House in October, had Russian and Chinese support and came with the seal of approval of the US president. It was clearly a Barack Obama operation.

Under the plan, Iran would send a large share of its low enriched uranium abroad, all at once, for a period of one year, receiving internationally monitored quantities of nuclear fuel elements in return. It was a deal that provided benefits for all sides. The Iranians would have enough material for what they claim is their civilian nuclear program, as well as for scientific experiments, and the world could be assured that Tehran would not be left with enough fissile material for its secret domestic uranium enrichment program -- and for what the West assumes is the building of a nuclear bomb. 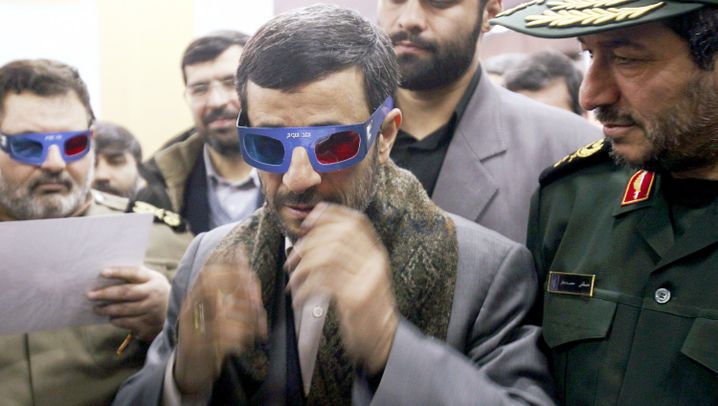 Tehran's leaders initially agreed to the proposal "in principle." But for weeks they put off the international community with vague allusions to a "final response," and when that response finally materialized, it came in the form of a "counter-proposal." Under this proposal, Tehran insisted that the exchange could not take place all at once, but only in stages, and that the material would not be sent abroad. Instead, Tehran wanted the exchange to take place in Iran.

Once again, the Iranian leadership has rebuffed the West with phony promises of its willingness to compromise. The government in Tehran officially rejected the nuclear exchange plan last Tuesday. To make matters worse, after the West's discovery of a secret uranium enrichment plant near Qom, President Mahmoud Ahmadinejad defiantly announced that he would never give in, and in fact would build 10 more enrichment plants instead.

But officials in Washington and European capitals are currently not as concerned about these cocky, unrealistic announcements as they are about intelligence reports based on sources within Iran and information from high-ranking defectors. The new information, say American experts, will likely prompt the US government to reassess the risks coming from the mullah-controlled country in the coming days and raise the alarm level from yellow to red. Skeptics who in the past, sometimes justifiably so, treated alarmist reports as Israeli propaganda, are also extremely worried. They include the experts from the United Nations International Atomic Energy Agency (IAEA), whose goal is prevent the spread of nuclear weapons.

After an extensive internal investigation, IAEA officials concluded that a computer obtained from Iran years ago contains highly volatile material. The laptop reached the Americans through Germany's foreign intelligence agency, the Bundesnachrichtendienst (BND), and was then passed on to the IAEA in Vienna.

Reports by Ali Reza Asgari, Iran's former deputy defense minister who managed to defect to the United States, where he was given a new identity, proved to be just as informative. Nuclear scientist Shahram Amiri, who "disappeared" during a pilgrimage to Mecca in June 2009, is also believed to have particularly valuable information. The Iranian authorities accused Saudi Arabia and the United States of kidnapping the expert, but it is more likely that he defected.

Iran's government has come under pressure as a result of the new charges. They center on the question of who exactly is responsible for the country's nuclear program -- and what this says about its true nature. The government has consistently told the IAEA that the only agency involved in uranium enrichment is the National Energy Council, and that its work was exclusively dedicated to the peaceful use of the technology.

But if the claims are true that have been made in an intelligence dossier currently under review in diplomatic circles in Washington, Vienna, Tel Aviv and Berlin, portions of which SPIEGEL has obtained, this is a half-truth at best.

According to the classified document, there is a secret military branch of Iran's nuclear research program that answers to the Defense Ministry and has clandestine structures. The officials who have read the dossier conclude that the government in Tehran is serious about developing a bomb, and that its plans are well advanced. There are two names that appear again and again in the documents, particularly in connection with the secret weapons program: Kamran Daneshjoo and Mohsen Fakhrizadeh.

Daneshjoo, 52, Iran's new minister of science, research and technology, is also responsible for the country's nuclear energy agency, and he is seen as a close ally of Ahmadinejad. Opposition leaders say he is a hardliner who was partly responsible for the apparently rigged presidential election in June. Daneshjoo's biography includes only marginal references to his possible nuclear expertise. In describing himself, the man with the steely-gray beard writes that he studied engineering in the British city of Manchester, and then spent several years working at a Tehran "Center for Aviation Technology." Western experts believe that this center developed into a sub-organization of the Defense Ministry known as the FEDAT, an acronym for the "Department for Expanded High-Technology Applications" -- the secret heart of Iran's nuclear weapons program. The head of that organization is Mohsen Fakhrizadeh, 48, an officer in the Revolutionary Guard and a professor at Tehran's Imam Hossein University.

Western intelligence agencies believe that although the nuclear energy agency and the FEDAT compete in some areas, they have agreed to a division of labor on the central issue of nuclear weapons research, with the nuclear agency primarily supervising uranium enrichment while the FEDAT is involved in the construction of a nuclear warhead to be used in Iran's Shahab missiles. Experts believe that Iran's scientists could produce a primitive, truck-sized version of the bomb this year, but that it would have to be compressed to a size that would fit into a nuclear warhead to yield the strategic threat potential that has Israel and the West so alarmed -- and that they could reach that stage by sometime between 2012 and 2014.

The Iranians are believed to have conducted non-nuclear tests of a detonating mechanism for a nuclear bomb more than six years ago. The challenge in the technology is to uniformly ignite the conventional explosives surrounding the uranium core -- which is needed to produce the desired chain reaction. It is believed that the test series was conducted with a warhead encased in aluminum. In other words, everything but the core was "real." According to the reports, the Tehran engineers used thin fibers and a measuring circuit board in place of the fissile material. This enabled them to measure the shock waves and photograph flashes that simulate the detonation of a nuclear bomb with some degree of accuracy. The results were apparently so encouraging that the Iranian government has since classified the technology as "feasible."

SPIEGEL obtained access to a FEDAT organizational chart and a list of the names of scientists working for the agency. The Vienna-based IAEA also has these documents, but the Iranian president claims that they are forged and are being used to discredit his country. After reporting two years ago that the Iranians had frozen their nuclear weapons research in 2003, the CIA and other intelligence agencies will probably paint a significantly more sobering scenario just as the UN Security Council is considering tougher sanctions against Iran.

When France assumes the Council's rotating chairmanship in February, Washington could push for a showdown. While Moscow is not ruling out additional punitive measures, China, which has negotiated billions in energy deals with Iran, is more likely to block such measures.

China could, however, approve "smart" sanctions, such as travel restrictions for senior members of the Revolutionary Guard and nuclear scientists. Fakhrizadeh is already on a list of officials subject to such restrictions, and Daneshjoo could well be added in the future.

But the West would presumably be on its own when enforcing sanctions that would be truly harmful to Iran -- and to its own, profitable trade relations with Tehran. The most effective trade weapon would be a fuel embargo. Because of a lack of refinery capacity Iran, which has the world's second-largest oil reserves, imports almost half of the gasoline it uses. Sanctions would trigger a sharp rise in the price of gasoline, inevitably leading to social unrest. Experts are divided over whether it would be directed against the unpopular regime or if the country's leaders could once again inflame the Iranian people against the "evil West."

This leaves the military option. Apart from the political consequences and the possibility of counter-attacks, bombing Iran's nuclear facilities would be extremely difficult. The nuclear experts have literally buried themselves and their facilities underground, in locations that would be virtually impossible to reach with conventional weapons.

While even Israeli experts are skeptical over how much damage bombing the facilities could do to the nuclear program, the normally levelheaded US General David Petraeus sounded downright belligerent when asked whether the Iranian nuclear facilities could be attacked militarily. "Well, they certainly can be bombed," he said just two weeks ago in Washington.