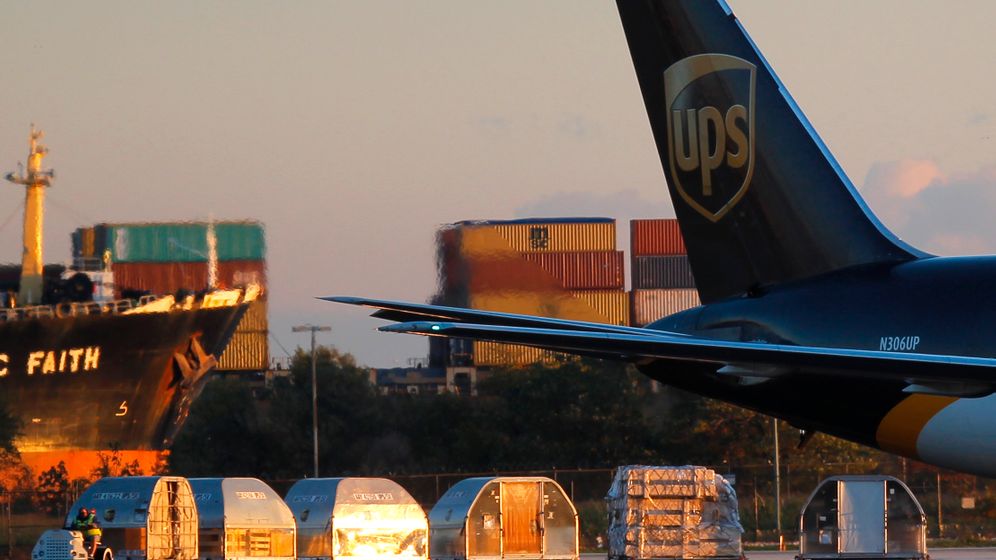 Very few passengers ever end up at Gate 32 in the far southeast corner of the Frankfurt airport. The small number of travelers who have taken their dogs to the airport's canine hotel are probably familiar with the gate. "It's right around the corner from here," says Harald Rose.

Rose, the secretary for the Ver.di service union at the airport, is driving his gray family car through the hectic traffic. Delivery vans, large trucks and construction vehicles crowd through the bottleneck at the gate. Their license plates, from countries like Bulgaria, Portugal, Turkey and Finland, are almost as international as the planes thundering through the air above.

Rose knows the people who work here. He calls them "his workers." He spends a lot of time listening to them talk, which is probably why he is so familiar with what goes on behind the scenes at this intercontinental aviation hub.

He swipes his access card through the card reader in front of the barrier. There is no guard at the gate to the area known as Cargo City South. "If I wanted to, I could take an entire busload of people through this gate," says Rose.

If Rose were a terrorist, he would know where to go: to the loading docks where dozens of trucks are maneuvering into position. "Back there," says Rose, a 61-year-old native of Darmstadt near Frankfurt, as he picks up his red signal vest and a thermos.

'Security Is also an Issue Here'

He quickly finds what he is looking for: an aircraft pallet loaded with cargo, tightly lashed down, sitting in front of the office of a logistics company. "It's all ready to be transported to an aircraft," says Rose.

He slips his thermos between the straps surrounding the bulky pallet and whispers conspiratorially: "Now imagine there was something other than coffee in there."

Rose is on a mission. He isn't just fighting for things like fair wages and occupational safety. "Security is also at issue here," he says. The union official has already taken photos here and sent them to politicians, the management and the company that runs the airport. "No one was interested," says Rose.

But now that two package bombs were discovered hidden in ink cartridges in Dubai and Nottingham two weeks ago, he hopes more people will start paying attention to what he has to say. Suddenly, the world has become acutely aware of how vulnerable this lifeline of the global economy has become. "It was pure luck that the bombs didn't explode," says Philip Baum of Green Light, a London-based security consulting firm.

The two pilots of a UPS jumbo jet that took off from Dubai bound for Cologne on Sept. 3 weren't as lucky. A fire broke out on board the aircraft shortly after takeoff. In their last desperate radio message before the plane burst into flames, the pilots complained that the smoke was so thick that they couldn't see anything.

Did al-Qaida detonate a bomb in the cargo hold of that Boeing 747? Until now, the authorities believed that a load of lithium batteries was the probable cause of the fire. And even though Western security experts still have no evidence pointing to an act of terror, al-Qaida's claim of responsibility for both the two package bombs from Yemen and the crash in Dubai sheds a new light on the UPS accident.

An Industry that Prefers Discretion

Another bomb that was discovered last week exposed the dangers of freight traffic even more glaringly than the al-Qaida attacks. A package bomb of conventional design found its way into the mailroom at the German Chancellery, the offices of Chancellor Angela Merkel. The shipment was X-rayed two times in Greece, but no one noticed anything. "A blind person with a white cane" could have noticed the bomb, says an irate senior official in Berlin.

The industry that suddenly finds itself in the spotlight is one that prefers to function as quietly and unobtrusively as possible. The fact that most fish bound for Germany arrive at the Frankfurt Airport is communicated with equal discretion as the curious factoid that entire locomotives are transported by air to the United States.

When the air freight industry comes under criticism, it's usually because of nighttime aircraft noise or engine fumes. Last year about 3 million tons of freight were transported through the air in Germany, with about half of it flying as cargo in the holds of passenger aircraft. Without such cargo, airlines would not be able to survive on the slim margins they make on low-cost tickets.

But in return for low ticket prices passengers are exposed to a risk, one that security experts are amazed terrorists have taken so long to discover. While passengers are required to pack every tube of toothpaste into clear plastic bags, air freight pallets are often loaded on board without undergoing any security screening at all. Passenger baggage control has undergone sweeping changes since the Lockerbie bombing. But so far no one seems to have been troubled by the fact that checked baggage sometimes shares the cargo hold with freight that has never been screened.

Given the recent bomb discoveries, all efforts to allay such fears appear to have been in vain. According to the official language of Germany's Federal Office of Civil Aviation (LBA), European Union regulations "state that all freight and mail shipments shall be subjected to 100 percent freight screening prior to loading onto an aircraft." But this doesn't reflect reality -- not in Yemen, not in Greece, nor in Germany. "The laws? They're toothless," says union official Rose. "This is where you can see the sad reality." The boom of the last few decades has allowed hundreds of new players to enter the lucrative logistics market. A total of 607 "regimented agents" -- the official term -- are certified by the LBA in Germany. They shoulder a lot of responsibility, because whatever they deliver to the loading areas of the air freight companies is already deemed to have been screened. After that, freight is not inspected again before being loaded into the hold of an aircraft.

Whatever these companies deliver enters the aircraft in no time. "Many work with temporary employment agencies and allow poorly trained temps to assemble the pallets," reports a security manager who works at Frankfurt Airport. In good companies, the manager adds, workers undergo a reliability test administered by the state criminal investigation office. Other companies choose to save the €47 ($65) fee for the test, which is not required by law.

In many cases, the men perform difficult physical labor for €8.50 an hour, sometimes even working double shifts. Although this is against the rules, many need the extra cash to get by. "These are poor people who can easily be recruited by terrorists," says the security expert.

Companies also tend to subcontract transport to the airport, often using one-man companies that deliver freight to the terminal with their only delivery van.

When the freight is handed over, all the driver has to do is present a simple document stating that he guarantees that his vehicle has remained consistently locked. The regulations make no mention of the use of seals to secure freight.

Despite all terror warnings, the rules have even been watered down. In the past, both the driver and the carrier were required to provide a joint certificate that was signed and sealed. "Now the driver can simply download the document from the Internet," says the Frankfurt expert.

All players are familiar with the reality of the security situation in the freight business. The public is told that details cannot be disclosed, because this would only play into the hands of terrorists. For that reason, the question of just how much freight is in fact screened is treated like a state secret.

The certified logistics experts should in fact inspect everything that companies or private individuals deliver to them. But scanning is cumbersome and time-consuming. Besides, the standards vary from country to country. "The EU countries have different thresholds at which a device detects suspicious cargo," says Joachim Ehrenthal of the Joint Air Transportation Competence Center for Security at the University of St. Gallen in Switzerland.

The higher the sensitivity threshold at which a device has to be set, the more frequently it triggers alarms. When it does, packages must undergo elaborate additional screening. This is expensive, which is why logistics companies prefer to set up shop in countries where fewer regulations are likely to get in their way. "Security in air freight can only be achieved if everyone truly participates," says Ehrenthal.

But even if every container, every box and every shipment were scanned using the best technology available, could a well-made bomb even be detected? The makers of the scanning devices were practically bursting with confidence at a trade show in Frankfurt last week. Some said that even the most sophisticated bomb could not escape detection by state-of-the-art ion detectors and X-ray scanners, or even by well trained bomb-sniffing dogs. "We would have been able to detect a package bomb like the ones from Yemen," claims Bernhard Semling.

'We Shouldn't Deceive Ourselves'

Semling, the director of strategy at scanner manufacturer Smiths Detection in Wiesbaden, near Frankfurt, demonstrates how a fully automated scanning device works. The truck-sized device is large enough to accommodate air freight containers. The goods in the containers appear on the screen in a form that will be familiar to passengers going through security screening at airports: in colorful outlines. "However, the computer does the actual analysis," Semling explains. For each piece of material, says Semling, it calculates the volume, density and effective atomic number. "If that information produces a suspicious combination corresponding to a specific explosive, the system sounds an alarm," says Semling.

But the larger the container, the poorer the resolution. For this reason, many experts have little confidence in the promises of the scanning device industry. "We shouldn't deceive ourselves," says the head of security for a major cargo carrier. "None of the devices would have detected a package like the ones from Yemen."

'Who Actually Ships a Printer from Yemen to the US?'

This is why leading air freight carriers have higher expectations of "more intelligent" security concepts. They evaluate their suppliers, as well as airports and countries of origin, for potential threats.

As a result, the carriers have established departments whose work is hardly inferior to that of the intelligence agencies. Lufthansa, for example, appears to have had its suspicions early on in the package bomb case, prompting the airline to suspend its flights to Yemen on Oct. 11.

Lufthansa is not revealing the reasons for this internal decision. But it is unusual that the airline made its decision at almost precisely the time when the intelligence agencies had received warnings about an imminent terrorist attack on two aircraft.

It is often sufficient to improve the monitoring of the contents of cargo shipments. "Who actually ships a printer from Yemen to the United States?" asks London security consultant Baum, and answers his own question: "This sort of thing ought to set off alarms with every inspector."

The German customs agency is already quietly taking this offensive approach, mostly out of necessity. An official who works in the package center at Cologne/Bonn Airport complains about serious understaffing problems. At UPS alone, says the official, more than 100,000 packages are processed every hour.

"We look at the freight lists and make a note of the packages that seem suspicious to us," the official reports. "Anything else would paralyze the flow of goods."

But even this approach fails in the face of harsh reality. What use is it when officials simply forward the list of packages they would like to inspect to the freight companies? When the list arrives at the giant package distribution facility, the workers there often do nothing but shrug their shoulders.

"By that time," the customs official says, "a third of shipments are already back in the air."