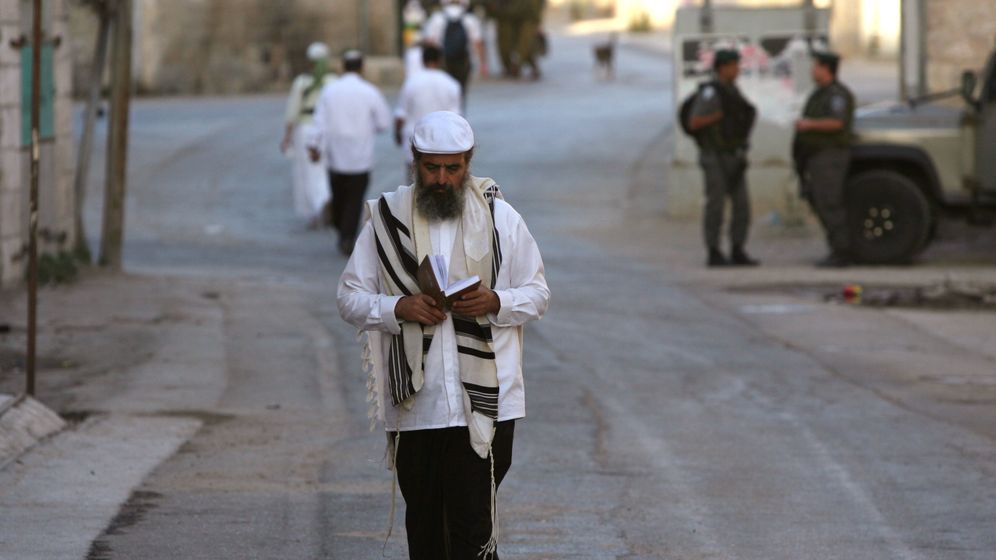 Just a couple of photos remain. One shows the old fruit market of Hebron with dozens of shoppers huddled around the stands overloaded with edibles; an elderly man wearing a Palestinian scarf carries a bag full of produce through the frame. Another image depicts an ancient archway beneath which souvenir sellers offer embroidery. Children rush off to school; an old woman shuffles toward the Kasbah.

But the Hebron captured in the photographs -- all of which come from the 1990s and were collected by Israeli peace activists -- no longer exists. The center of the city, the second largest in the West Bank, is no longer the lively place it once was. Now, a Jewish settlement dominates the heart of the city. Ninety families have settled here -- a right-wing, ideologically motivated group interested in "taking back" Hebron from the Palestinians.

The result is nothing short of a ghost town guarded by hundreds of Israeli soldiers. For the benefit of 800 Jews living in Hebron, a city of 170,000 people, Palestinian life in the city center has come to a standstill.

Indeed, a visit to Hebron can destroy any hopes that the recently started Middle East peace talks might find success. It is here in Hebron that the Israeli occupation of the West Bank shows its ugliest face.

The city center is divided into sectors. There are streets that are open to settler traffic but which may only be used by Palestinian pedestrians. Some streets are closed to Palestinians altogether. Along Shuhada Street, once a main arterial through the Hebron market, all Palestinian shops are shuttered. The Israeli military ordered them closed due to security concerns. More than 1,800 Arab families lost their livelihoods as a result.

Peace, even conciliation, seems extremely remote in Hebron. In Kiryat Arba, a separate settlement at the edge of town, the settlers have erected a monument to Baruch Goldstein. A Jewish doctor, Goldstein stormed the Ibrahimi Mosque -- known to Jews as the Tomb of the Patriarchs -- in Hebron in 1994 and killed 29 praying Muslims.

There are both religious and political reasons for why the settlers have sought out Hebron. On the one hand, the Tomb of the Patriarchs is revered as the burial site of Abraham and Sarah, Isaac and Rebecca, and Jacob and Leah. Its religious importance for the Jewish people is second only to Jerusalem. On the other hand, however, the settlements are seen as recompense for the 1929 massacre of Jewish residents of Hebron at the hands of Palestinians.

First and foremost, however, the 800 Jewish settlers in Hebron want to send a message. "They will have to understand that they can't stay here," says David Wilder, spokesman for the Hebron settlers.

He's referrring to the Palestinians. In his view, there is no place for them in Hebron or the surrounding hills. God pledged the West Bank, referred to by settlers as Judea and Samaria, to the Jewish people as a homeland, he says. It thus belongs to Israel. As such, the settlers of Hebron view the current peace talks, which aim at the founding of a Palestinian state, with extreme skepticism.

"Should (Israeli Prime Minister Benjamin) Netanyahu accept the demands of the Palestinians, then it is a declaration of war against us," Wilder says.

The issue of settlements is one of the stickiest problems currently facing negotiators in the search for a peace agreement. Washington is pressuring Israel heavily to extend the moratorium on further settlement construction beyond the end of this month. Palestinian President Mahmoud Abbas has said he will put a stop to talks should Israel not consent.

The settlers, for their part, insist that they will resume building settlements in October -- in areas that are to be part of a future Palestinian state. Wilder and other settlers worry that the construction moratorium is the beginning of a slippery slope: A government that prevent settlers from expanding, they fear, won't shy away from "giving away" the West Bank to the Palestinians.

As self-proclaimed defenders of the Israeli homeland, the settlers seem prepared to do anything in their power to prevent that from happening. "Should a Palestinian state be established and hundreds of thousands of us be forcibly resettled, I can't guarantee anything," Wilder says.

Pistol at His Side

Wilder, originally from New Jersey, has lived in Hebron for the last 12 years. His Glock pistol never leaves his side, even when he's at home.

The settlers are concerned that even a right-wing government like that of Netanyahu view the settlements as an offering that must be made on the altar of peace. And Netanyahu's Likud party has already shown in the past that it is prepared to make difficult sacrifices. In 1979, Likud founder Menachem Begin gave the Sinai Peninsula back to Egypt, forcing the settlers to move elsewhere. In 2005, Ariel Sharon pulled out of the Gaza Strip and settlers were evacuated against their will.

Jewish militias have begun training in the West Bank to ward off a Palestinian attack. But some of the young men have not been shy about admitting that they would also fight against the Israeli army should they attempt to forcefully evacuate the settlements. First, however, the settlers are doing all they can on the political front to avoid such a scenario.

Their political leverage is not insignificant. There are some 500,000 Jewish settlers living in the occupied territories. Many of them came for the simple reason that real estate is cheap, but they too have become concerned that the good life may soon be coming to an end. Even apolitical settlers have taken to voting for right-wing parties.

Still, a majority of Israelis believe that the lion's share of the West Bank, particularly small, hardliner settlements like those in Hebron, will have to be sacrificed in order to ease tensions in the region. But the survival of Netanyahu's government is dependent on the settler vote, a fact which gives men like Wilder even more confidence. "If Netanyahu bows to the Palestinians, we will topple his coalition," Wilder says.

Ironically, political moderates in Israel share part of the blame for the current political situation. Following parliamentary elections in February 2009, Zipi Livni's Kadima party emerged with the most seats in the Knesset. But she refused to enter into a coalition with Netanyahu, allowing him to form a governing coalition with fundamentalist parties such as those representing the interests of the settlers.

In Hebron, meanwhile, frustration is growing. "Particularly those from the younger generation want to continue building," Wilder says. In settlements both within and near Hebron, many are waiting impatiently for the moratorium to expire at the end of the month. "Then we will continue to shape our future in stone," Wilder says.

And what if Jerusalem extends the moratorium? "You know how people behave when they have been backed into a corner," he replies. "They explode."