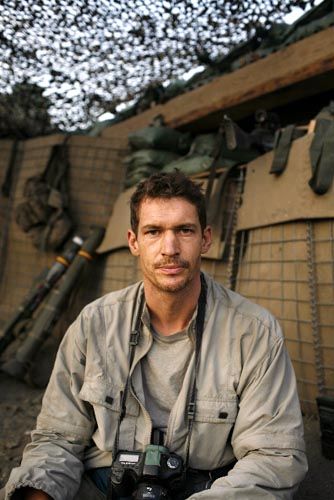 Tim Hetherington: "I need to go back."

War reporters live dangerously. That platitude finally caught up with Tim Hetherington last October in Afghanistan's Korangal Valley, nicknamed the "Valley of Death" by US troops.

It was Hetherington's third tour there with US forces. The British photographer was once again traveling with the 2nd Platoon of Battle Company, part of the 2nd Battalion, 503rd Infantry Regiment (Airborne). One day, amidst the chaos and bloody mayhem of a combat operation with insurgents, Hetherington fell and broke his fibula. He had to be airlifted out.

"It could have been worse," Hetherington, 37, told SPIEGEL ONLINE. "I could have died."

Nonetheless, it was a complicated fracture, which kept him on crutches for months. Slowly, he learned to walk again. Even today, the Londoner is still receiving medical treatment in New York City, at Columbia University Medical Center.

And in April he intends to go back to Afghanistan, to rejoin the 2nd Platoon.

He wants to go back to finish telling the story of the soldiers of that platoon -- because that story isn't over yet. "I am dedicated to this project," says Hetherington. "I will continue until it has reached some kind of fruition."

It's a story that has, at least in part, recently re-entered the world's consciousness. Hetheringtons's photograph of a young, worn-out, desperate-looking soldier of the 2nd Platoon, taken on a previous tour to Afghanistan, was recently named World Press Photo of the Year 2007. "This image represents the exhaustion of a man -- and the exhaustion of a nation," said jury chairman Gary Knight.

As Close as Possible

What is more interesting than any words of praise from the jury are the dramatic circumstances of that picture, which have been unknown until now. In conversation with SPIEGEL ONLINE, Hetherington revealed the background to the Sept. 16, 2007 picture -- and the trauma of a war which is largely forgotten, at least in the US.

Almost more telling, however, is what Hetherington doesn't reveal -- the name of the soldier in the shot. Because the man is still out there on the frontlines of Afghanistan, an anonymous fighter for a cause that attracts little attention back home. Who knows how the young man feels about his new role of unwitting anti-war symbol? "If he wants his name supplied, I will make it public," says Hetherington. "But I haven't heard back from him yet."

The picture was part of an assignment for Vanity Fair, the US monthly known for its opulent features. Hetherington had been in Afghanistan before, in 2001. He went back to accompany the 2nd Platoon, along with star journalist Sebastian Junger, the author of "The Perfect Storm," who is sometimes described as the new Hemingway.

It started as a simple job, says Hetherington, "to help pay your bills and stuff." It would soon become much more.

Hetherington and Junger embedded themselves with the 2nd Platoon and thus practically became members of that unit -- albeit as civilians without any military training. No sweat, says Hetherington, even though he doesn't consider himself a war photographer: "I kind of know what the deal is. It's my job."

Some reporters frown on being embedded; they fear loss of distance, of objectivity. Hetherington, however, thrives in it: "I seek to be embedded." He wants to be as close as possible to the soldiers, to create "intimate portraits," as this seems to be the only way these days "to get the American audience engaged."

It's the same method he has used successfully in previous photo series, when he depicted the aftermath of the 2004 Asian tsunami, the civil war in Liberia, and New York City in the days after 9/11.

The 2nd Platoon, at that time 20 men strong, is considered the tip of the spear of the American forces in the Korangal Valley, the most dangerous part of Northeast Afghanistan. Their mission is to hold and expand US control and cut off the lines of the Taliban fighters, insurgents and al-Qaida cells, preventing them from reaching the capital Kabul. Some believe Osama bin Laden is hiding in the area, which was also visited by SPIEGEL ONLINE reporter Matthias Gebauer in 2006.

Under frequent enemy fire, the men had built an outpost, overlooking part of the valley. A crude bunker made from dirt and rock, "maybe 20 by 40 meters," says Hetherington. They called it "Restrepo," after their 20-year-old medic Juan Restrepo, who had been killed in an ambush in July.

Sept. 16, 2007 was a Sunday. "A day of pretty intense fighting," recalls Hetherington. They had just been informed by their military eavesdropping operation listening in on Taliban communications that the enemy had brought 20 hand grenades into the valley, along with 107-mm. rockets and three suicide vests. The US forces were under constant fire. One of the soldiers broke his leg and had to be given morphine.

"We felt like targets," says Hetherington. "The mood in the camp darkened."

Hetherington went "on autopilot," as he calls it. He always does that when he finds himself in a tight spot, feeling threatened or even fearing for his life. "I focus completely on my job. Like a machine. The soldiers do the same. It takes your mind off things." Off the fear, the pain, the helplessness -- at least for a while.

They barely slept that night. All of them crowded in the bunker, against the dirt wall "away from the other wall where they would come over," says Hetherington, they being the enemy.

It was in that darkest hour that Hetherington took the picture that moved the world. A young soldier, leaning against the earth wall, his helmet off, arms smeared with dirt. He wipes the sweat off his brow, looking directly into the camera, his eyes foggy, his mouth ajar, part shocked, part weary, part desperate. He is wearing a large ring on his left hand.

The image is dark, blurry, lacking contrast. Some have criticized that now, arguing that a photo like that "was not appropriate to win," says Hetherington. But the shot captures the moment perfectly, and it works on two levels: It gives the viewer the sense of what happened then and there, and at the same time it has timeless, symbolic meaning.

Hetherington took many more pictures in Afghanistan. Some were published in the January issue of Vanity Fair, others can be seen on his personal Web site.

Among them are almost idyllic-looking portraits of the child-like soldiers. Lieutenant Matt Piosa, 24, the platoon leader, looks like a defiant schoolboy. Sergeant Kevin Rice, 27, stares straight into the camera, full of doubt. Shortly thereafter, Rice was critically injured -- a gut-wrenching moment Hetherington captured with his video camera for ABC News. In the video, another soldier can be seen collapsing in tears.

You can only be on autopilot for so long. "Eventually it does catch up with you," says Hetherington. "And then it comes out in random ways." Sometimes even today.

He was never really after an award. All he wanted to do with his pictures was to tell the story of the men of the 2nd Platoon. "It's a terrible story," says Hetherington. "But it's strong. They put their lives on the line." Which gives the prize added meaning, on top of the 10,000 euro that come with it: "It's a great honor to win the award."

The jury picked Hetherington's photo from 80,536 submissions. The awards ceremony is scheduled for April 27, 2008, in Amsterdam. Afterwards, an exhibition of all the 59 prizewinners will travel to over 100 locations around the world.

By then, Hetherington hopes to be on his way back to Afghanistan, to the 2nd Platoon. As soon as he's "up and running," he wants to return, along with Junger, who already went for another tour last month.

He feels like he doesn't have a choice: "I need to go back."