The rebellion against him was just a few days old when Syrian dictator Bashar Assad summoned his country's Christian leaders to the presidential palace in northwestern Damascus. Syrian Orthodox Patriarch Ignatius came. He is 78 years old and critically ill, but still a powerful figure. Bishops and archbishops representing Catholics, Armenians, Aramaeans and Assyrians were also present. In total, there were a dozen religious leaders, representing around 2.5 million Syrian Christians.

The message they received from their head of state was short and simple: Either support me, or your churches will burn.

It seemed Assad, himself a member of the Alawis, a branch of Shia Islam, didn't want to assume that Syria's Christians would continue to remain aloof from politics. Sensing that not only his authority but perhaps his very survival was at stake, he resorted to the same means his father, Hafez Assad, once used to maintain power: pressure and violence.

The regime has killed at least 3,500 people since March. There are reports of torture, executions of unarmed individuals and mass executions of army deserters. But none of this has dissuaded members of the opposition. Shaky Internet videos show thousands continuing to march through the streets of Homs, Hama, Daraa and Damascus, chanting: "Down with Bashar!"

Christian neighborhoods and villages, meanwhile, have remained largely quiet, with no large demonstrations and little chanting or graffiti critical of the regime. Instead, there is silence. Or, worse still, expressions of open loyalty to the regime.

"President Assad is a very cultured man," says Gregorios Elias Tabé, 70, the Syrian Catholic archbishop of Damascus. He calls all the media liars and the demonstrators nothing but terrorists. Every Sunday, he preaches at St. Paul's Chapel on the southeastern edge of Damascus' old town, which takes its name from the Apostle Paul, said to have escaped from the city here 2,000 years ago. Syria's Christian congregations are among the oldest in the world, and the archbishop would like them to continue to exist for many years to come -- which gives him a reason to take Assad's side.

"We're a nation of 23 million," Tabé says, "and no law can ever satisfy everyone. That's true in every country -- there are always 10 percent who are sacrificed." It's a state of affairs he can accept, as long as Christians aren't the segment of the population being sacrificed.

From the archbishop's perspective, it's possible to live well in Syria. The president guarantees religious minorities' rights, Christians are allowed to practice their faith freely and churches are protected. Assad generally hands out important government and army posts to members of his own group, the Alawis, but Christians also hold a number of senior positions in important institutions such as the presidential guard and intelligence services. The head of the country's central bank is a Christian, as is the new defense minister. Many Christians belong to the ranks of the privileged within the system, and few have yet dared to take the step of joining the opposition, not when they are held so closely in the president's embrace.

Assad not only allows Christians influence, he also fans their greatest fears: Islamists, Sharia law and the prospect of burning churches. The bishops would probably prefer a brutal dictator who lets them pray in peace than the Islamist Muslim Brotherhood, who would demand a share of power in a Syria without Assad.

But then there are also young Christians such as Mohammed, as he asks to be called, who are organizing the resistance in Bab Sharqi, a district in the Damascus old town where Archbishop Gregorios' church also stands. Mohammed formed an organizing committee together with seven other friends. The activists are all between the ages of 20 and 29, mostly students. They meet at secret locations and communicate by email and satellite telephone.

At the moment, the group's protests are still modest, says Mohammed. For example, perhaps three dozen people recently gathered in front of the Church of Mary, just 300 meters (1,000 feet) from St. Paul's Chapel, where Archbishop Gregorios preaches on his favorite subject, Christian morality. Hesitantly, a chant against Assad rose up from the crowd. Within a few minutes, dozens of government thugs, dressed in plainclothes and armed with clubs, stormed the demonstration and drove the group into the old town's maze of narrow alleys, where they scattered.

Within Damascus, there are only perhaps a few hundred Christians taking an active role like Mohammed. So far, their support has come primarily from fellow Christians living in exile, who have formed opposition groups in the US and Great Britain. They are also planning to set one up in Germany soon.

Working in tandem with the Syrian National Council, the most important opposition group, these activists are looking to increase pressure on the West. Their first choice would be an intervention modeled after NATO's involvement in Libya. They don't see any chance of success without military support, and can't understand why Washington, Paris, London and Berlin are so opposed to the idea.

Asked about a possible intervention, Archbishop Gregorios laughs long and loud. As a Christian, he says, he doesn't believe in the power of weapons, only in peace and democracy.

Apparently, he believes in President Assad as well. 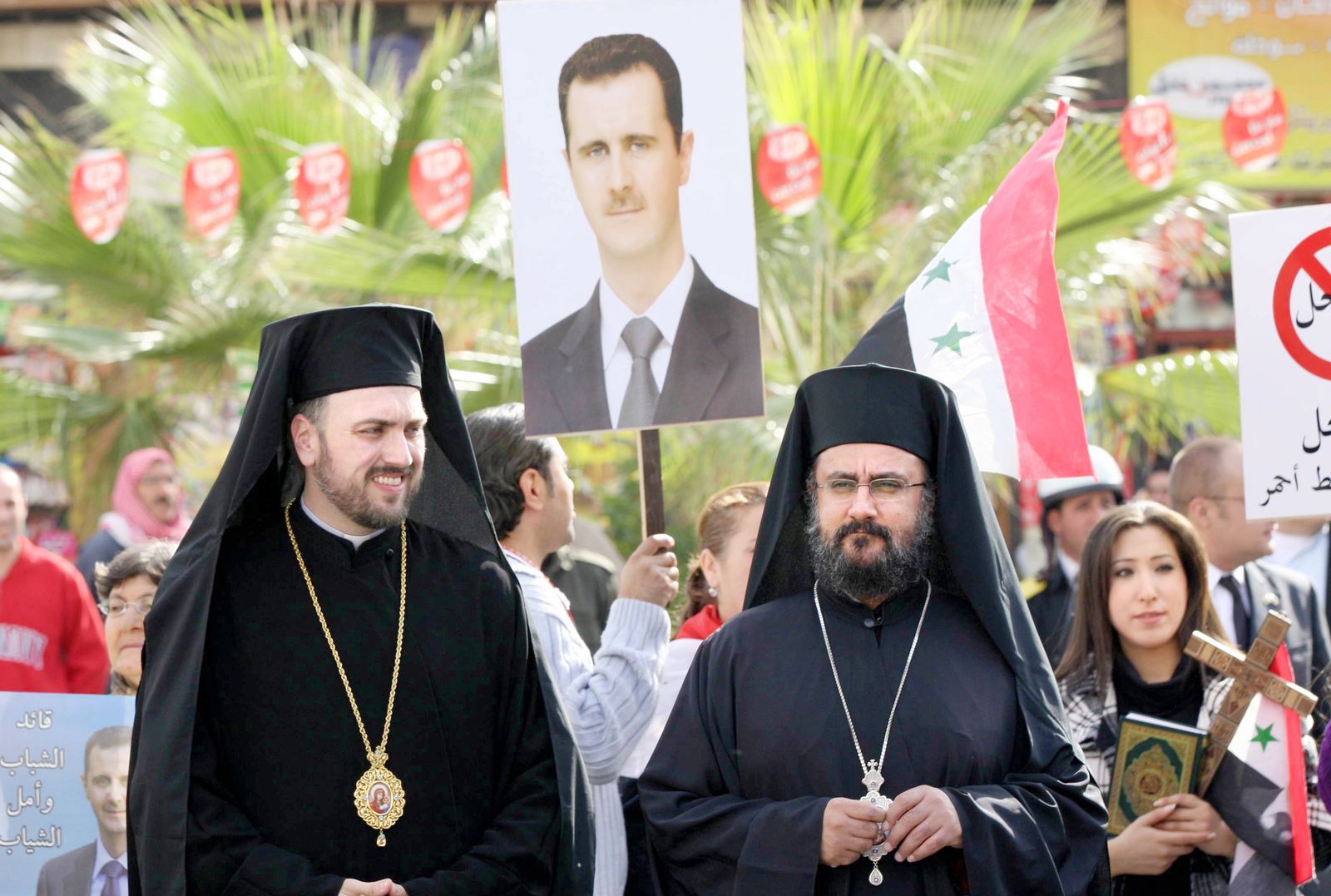 Two Syrian Orthodox priests wait for the arrival of Russian Orthodox Patriarch Kirill in Damascus on Nov. 12, 2011. A poster of President Bashar Assad can be seen in the background.