Turkish Prime Minister Recep Tayyip Erdogan is the most important Muslim ally of the United States. On coming into office he promised a democratic Islam -- a vision that could have become a model for other countries in the region.

But if the US dispatches are to be believed, Turkey is far from realizing that vision. Erdogan? A power-hungry Islamist. His ministers? Incompetent, uneducated and some of them corrupt. The government? Divided. The opposition? Ridiculous.

US diplomats have sent thousands of reports from Ankara to Washington in the past 31 years. Recent documents, though, are merciless. They convey an image of Turkey which is at odds with almost everything the US government has officially said about the country.

First and foremost, the US distrusts Erdogan. A dispatch dated May 2005 says that he has never had a realistic worldview. Erdogan, the document says, thinks he was chosen by God to lead Turkey and likes to present himself as the "Tribune of Anatolia."

US diplomats claim that Erdogan gets almost all of his information from Islamist-leaning newspapers -- analysis from his ministries, they say, is of no interest to him. The military, the second largest among NATO member states, and the secret service no longer send him some of their reports. He trusts nobody completely, the dispatches say, and surrounds himselves with "an iron ring of sycophantic (but contemptuous) advisors." Despite his bravado, he is said to be terrified of losing his grip on power. One authority on Erdogan told the Americans: "Tayyip believes in God ... but doesn't trust him."

Erdogan took office as prime minister in 2003, two years after having founded his party, the Islamic-conservative AKP. During the campaign Erdogan announced his intention to tackle corruption.

Since 2004, however, informants have been telling US diplomats in Turkey of corruption at all levels, even within the Erdogan family. None of the accusations have been proven -- it could be that the informants merely want to denigrate the premier. But their reports help shape the Americans' image of Turkey -- and as such they are devastating.

The rumors sound outrageous. A senior government advisor is said to have confided to a journalist that Erdogan enriched himself from the privatization of a state oil refinery. Furthermore, a source within the Ministry of Energy told the US that the prime minister pressured the Iranians to ink a gas pipeline deal with a Turkish company owned by an old schoolmate of his. The deal surprised observers: the company builds ports, but has little experience in the energy business. Two unnamed US sources claim that Erdogan presides over eight Swiss bank accounts.

Erdogan's party, the AKP, vehemently denies all allegations. And the premier says he acquired his wealth in the form of gifts presented by guests at his son's wedding. Furthermore, he says, a Turkish businessman is paying for his four children to study in the US. The American Embassy sees such explanations as "lame."

A 'Lack of Technocratic Depth'

Erdogan, though, apparently knows how to score points at the grass roots level. According to US dispatches, when his AKP suffered a painful defeat in the Trabzon mayoral election of 2004, he allegedly installed his close friend Faruk Nafiz Özak as the head of the local Trabzonspor football club. In accusations which have not been proven, informants told the US Embassy that Erdogan sent Özak millions of dollars from a secret government account. Özak was to use the money, states a dispatch dated June 2005, to buy better players in an effort to overshadow the mayor. Erdogan did not respond to SPIEGEL efforts to contact him, but said on Monday that the credibility of WikiLeaks was questionable.

According to US Embassy analysis, he has transformed the AKP into a party which works almost exclusively on his behalf. Many top AKP leaders including Erdogan and President Abdullah Gül are said to be members of a Muslim fraternity.

There is generally a "lack of technocratic depth" in the government, criticized US Ambassador Eric Edelman back in January 2004: "While some AK appointees appear to be capable of learning on the job, others are incompetent or seem to be pursuing private ... interests" or those of their religious congretations. "We hear constant anecdotal evidence ... that AK appointees at the national and provincial levels are incompetent or narrow-minded Islamists."

Many high-ranking state officials have told the Americans they are appalled by Erdogan's staff. Erdogan, one such official told US diplomats, appointed a man exhibiting "incompetence, prejudices and ignorance" as his undersecretary. Another informant told the US that Women's Minister Nimet Çubukçu, an advocate of criminalizing adultery, got her job because she is a friend Erdogan's wife, Emine. Another minister is accused of nepotism, links to heroin smuggling and a predeliction for underage girls.

Getting Off the Train

Erdogan and the AKP are revered by the electorate. The prime minister is a "natural politician," US diplomats wrote in one dispatch from early 2004. He "possesses a common touch," is "charismatic" and has "street-fighter instincts." The prime minister grew up in Kasimpaa, a rough port district of Istanbul, and became involved in a radical Islamist organization as a young man before joining the conservative Order of the Nakibendye. Before entering government, he said: "Democracy is like a train. We shall get out when we arrive at the station we want."

As a young man he met Abdullah Gül, with whom he later orchestrated the rise of the AKP. A deep-seated rivalry now exists between the two. Again and again Gül has stirred up trouble against Erdogan, particularly when the prime minister is traveling abroad. In a report from March 2005 when Gül was Turkish foreign minister, US diplomats described this as Gül's attempt to undermine Erdogan's policies and gain more power in the party. Unlike Erdogan, Gül speaks English, say the diplomats, and presents himself as moderate and modern.

In truth, however, the US sees Gül as more ideological than Erdogan and anti-Western, according to embassy dispatches based on statements from those close to Gül. Gül uses almost every opportunity to make Erdogan look bad, the documents claim, even talking badly about him in front of state visitors. Gül worked for a long time to become president and therefore Erdogan's equal. Erdogan tried to prevent his rise -- without success. In the summer of 2007 Gül took up residence in the presidential palace in Ankara.

US diplomats are likewise unflinching when it comes to Erdogan's advisor and foreign minister, Ahmet Davutoglu. They say he understands little about politics outside of Ankara. They see this as unfortunate, because they want to see Turkey join the EU -- but they don't believe it will ever happen. In order to make progress toward EU accession, the US ambassador wrote, the government must "hire a couple thousand people skilled in English or other major EU languages and up to the bureaucratic demands of interfacing with the Eurocrats." The AKP, write US diplomats, had thus far employed mostly confidants from the Sunni brotherhoods.

Some AKP politicians, according to a US assessment, support Turkish membership in the EU for "murky" and "muddled" reasons, for example because they believe Turkey must spread Islam in Europe. A US dispatch from late 2004 reports that a member of a leading AKP think tank said that Turkey's role is "to take back Andalusia and avenge the defeat at the siege of Vienna in 1683."

Foreign Minister Ahmet Davutoglu largely shares this viewpoint and the Americans are alarmed by his imperialistic tone. In a summary of a speech by Davutoglu delivered in Sarajevo in January 2010, the US ambassador wrote: "His thesis: the Balkans, Caucasus and Middle East were all better off when under Ottoman control or influence; peace and progress prevailed. Alas the region has been ravaged by division and war ever since.... However, now Turkey is back, ready to lead or even unite. (Davutoglu: 'We will re-establish this (Ottoman) Balkan')."

Of Rolls Royce and Rover

Davutoglu's hubris and his neo-Ottoman vision is cause for US concern. Turkey has "Rolls Royce ambitions but Rover resources," reads the same 2010 cable. According to embassy dispatches from 2004, Defense Minister Mehmet Gönül warned of Davutoglu's Islamist influence on Erdogan. He is "exceptionally dangerous" Gönül told the US.

Under Erdogan, relations with Israel have dramatically deteriorated. The two governments are at odds over the war against Hamas in late 2008 and early 2009 and over the attack on the Gaza fleet earlier this year. The Israeli ambassador to Ankara, Gabby Levy, claimed in October 2009 that Erdogan was behind the cooling of relations: "He's a fundamentalist. He hates us religiously," Levy was quoted as saying in a confidential US embassy dispatch from October 2009.

The Americans are watching with concern as Erdogan distances NATO member-state Turkey further and further from the West. They are concerned about the country's stability. "Every day is a new one here, and no one can be certain where this whole choreography will fall out of whack," James Jeffrey, then the US ambassador in Turkey, wrote in late February 2010. "Then, look out." 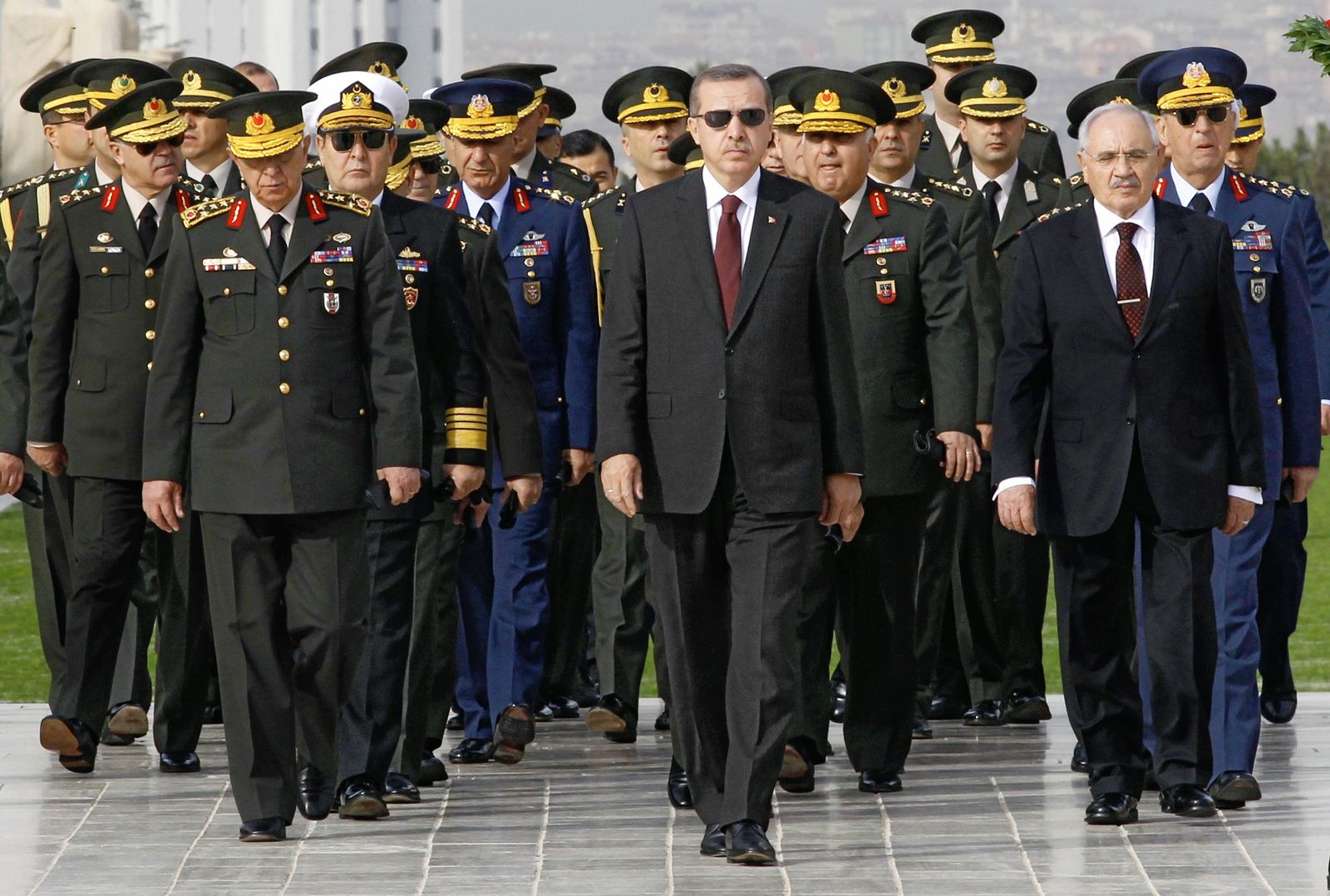 Turkish Prime Minister Recep Tayyip Erdogan, center, has surrounded himself with "an iron ring of sycophantic (but contemptuous) advisors," according to US diplomatic cables.