Yet another Russian human rights activist has been silenced in yet another brutal attack. This week unknown gunmen shot anti-corruption activist Albert Pchelintsev in the mouth with rubber bullets, in front of his apartment in the Moscow suburb of Khimki. The 38 year old was seriously wounded in the lower face and jaw but survived the attack.

Pchelintsev is the chairman of a regional movement against corruption. During the past year he helped open a community office where citizens could report and document cases of corruption. As a result of this and other work, the activist had recently been threatened: If he didn't stop his work, he would not be able to speak out again, he was warned.

This is the third attack on Russian human rights activists to come to international attention over the past two weeks. In the middle of July, journalist and activist Natalya Estemirova, who was working in Chechnya, was abducted and shot. Shortly afterwards the body of Andrei Kulagin, from the organization Justice, was found in a sand quarry near the city of Petrozavodsk, in northern Russia. Kulagin was an advocate for the humane treatment of prisoners and his disappearance in mid-May was sudden.

Estemirova's murder, in particular, drew a lot of international attention -- mainly because the member of prominent human rights group, Memorial had been documenting abductions and murders in the former Chechnyan war zone. These days the region is considered something of a legal black hole -- it is controlled by Chechnyan President Ramzan Kadyrov, a protégé of former Russian President Vladimir Putin.

Human Rights Leader To Be Sued

Shortly before her death Estemirova, who also knew murdered Chechnyan journalist Anna Politkovskaya, had reported online about the execution of an alleged rebel by Chechnyan militia. The Kadyrov's administration's human rights officer had then contacted Memorial's Grozny office to express unhappiness with this latest filing by Estemirova. They also indicated that she would do well to make an urgent change to her way of working.

Four days later the 50-year-old was forced into a vehicle, driven over the border into the neighboring republic of Ingushetia, about 100 kilometers (63 miles) from the Chechen capital Grozny, and killed with shots to the head and chest. Oleg Orlov, the head of Memorial, immediately laid the blame for Estemirova's death at Kadyrov's door. Kadyrov replied, saying he would personally oversee the investigation, noting that "we will also search for the criminals using other, traditional methods." Kadyrov has since said he will sue Orlov for saying that he was behind Estemirova's killing; his spokeperson said a lawyer is preparing a lawsuit so that Kadyrov can "defend his dignity."

Reacting to Estemirova's death, her colleagues closed Memorial's office in Grozny. Orlov said that they needed to have some time to think about whether, and how, they would carry on. He added that the organization would continue to look into the cases it was already working on because they didn't want to leave anyone in the lurch. Orlov also admitted feeling terrible about the fact that Estemirova had not been able to be brought to safety in time. "At the very least we could have made public the threats she received shortly before her death," Orlov said. "That was our mistake."

As usual, after the murder or abduction of Russian human rights activists, there was plenty of international reaction -- from Brussels to Washington. What was different this time is that Russian President Dmitry Medvedev, who was in Munich holding talks with German Chancellor Angela Merkel, actually appeared disturbed by the incident. He described the work that Estemirova was doing as valuable and gave assurances that the murderers would be found and punished. Medvedev also sent a message of sympathy to the Memorial office in Grozny.

In contrast, former Russian President Putin, who happened to be in Germany at the time Politkovskaya was murdered, remarked that Politkovskaya's death had done Russia far more harm than any of her published works ever had. 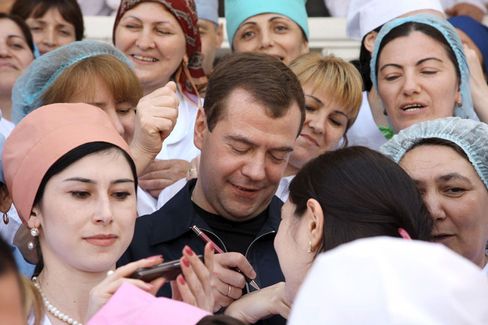 The Russian President Dmitry Medvedev recently charmed the German Chancellor on a visit to Munich and likes to appear liberal.

Ever since he took office, Medvedev has been taking a more liberal tone than his predecessor. He has said more than once that he wants to strengthen the Russian legal system and fight corruption. After human rights lawyer Stanislav Markelov and young journalist Anastasia Barburova were shot dead on a central Moscow street in January, Medvedev met with the editor in chief of the highly regarded, Kremlin-critical newspaper Novaya Gazeta where the pair, and also Estemirova, worked. A little later he gave the newspaper his first lengthy interview as president.

Outside of such meaningful gestures, Medvedev has actually also made some genuine advances in this area: He has established a human rights council and liberalized laws pertaining to non-governmental organizations, clearing a lot of bureaucratic difficulties out of the way at the same time.

Nevertheless, these recent murders and kidnappings indicate that the human rights situation in Russia hasn't really improved. In fact, it seems to have deteriorated. "You get the impression that there are more of these incidents happening, and that they are happening more regularly," Simon Cosgrove of the Russian office of international human rights watchdog, Amnesty International, said. The government doesn't protect the activists and it doesn't investigate the murders. "The Russian government has not taken any effective steps to improve the human rights situation," Cosgrove said. "Medvedev says a lot of things that we like -- but we would also like to see him follow up his words with deeds."

In May, Amnesty International released a study, "Rule without Law: Human Rights Violations in the Northern Caucasus," which said that freedom of the press and freedom of opinion were restricted in the region. Minorities, such as the gay and lesbian community, were oppressed and ethnic minorities were being harassed by right-wing extremists. And rather than being independent, the justice system -- which was perilous and untrustworthy anyway -- was simply an adjunct of state power. Arbitrary killings, torture and "disappearances" were everday occurrences.

The Russian Foreign Ministry's reaction? The report was "biased" and Amnesty International was clearly an "anti-Russian organization."