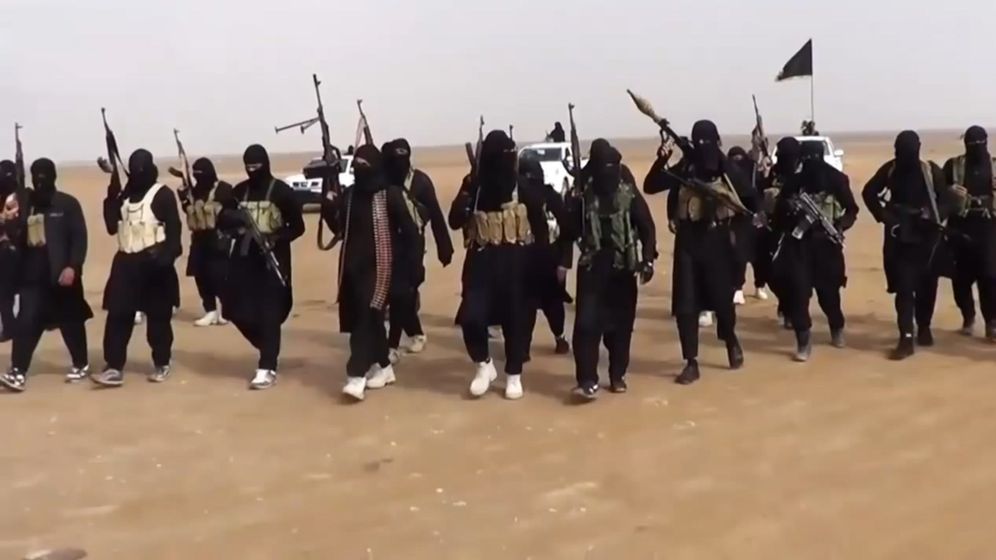 "Every day I receive about 100 patients. Every day there is shelling. Some of the injuries are very complicated, legs amputated, head wounds. But I don't have the materials to provide serious treatment. There are cases where I have put patients on the helicopter alive and they die when they get to Baghdad."

Dr. Khaldoun Mahmoud speaks extremely rapidly, and with good reason. There is only a single place remaining in the northern Iraqi town of Amirli where he still has a modicum of mobile phone reception: at the helicopter landing pad above the village. And with every call, he is risking his life. Fighters from the Islamic State (IS) have surrounded the town and are just one kilometer away.

The jihadists are trying to cut off Amirli's last link to the outside world and have set up their artillery within sight of the landing site. An Iraqi army helicopter still lands here twice a week, supplying the town with a minimum of supplies. On the way back, it ferries out the wounded. Without the flights, the people of Amirli would be left completely on their own and would likely quickly succumb to the ongoing siege.

"It's like genocide" says Mahmoud. "Da'esh" -- the Arabic abbreviation of the Islamic State -- "attacks women, children, soldiers, they don't differentiate between them. From one family that tried to escape, only two children came back alive. They were carrying the corpses of the rest of the family with them. People are dying from malnutrition; they are drinking dirty water and we have ulcers, bleeding and diarrhea."

The doctor rapidly rattles off the cases he has seen. Like that of little Hussein: "He was hungry and asking me for food. I started to cry because he was so hungry and I gave him a little food. Two days later he was killed in a mortar attack. The mortar exploded above his father and afterwards we could only find pieces of him."

He then laughs, a manic expression of desperation from a doctor responsible for 13,000 people. "Maybe I'll go crazy if I don't keep my sense of humor. I try to joke with the children I treat. People have to have the sense that someone is helping them. But sometimes I don't have the skills to help people," he laments. "I'm only a dentist."

No One to Protect Them

In recent weeks, the fate of the tens of thousands of Yazidis from Sinjar has dominated global headlines as they sought to escape the IS. The US continues to fly airstrikes and has dropped supplies from the air. Even the German government intends to deliver weapons to the embattled Kurds in northern Iraq. But just 250 kilometers (155 miles) to the south, a similar catastrophe is brewing, and the response has been minimal.

There are no Yazidis in Amirli. Two-thirds of the town's residents are Turkmen whose ancestors mostly came from areas that are part of present-day Turkey. They are Shiites and are thus seen by the Sunni fighters of the Islamic State as being worse than heretics. They are apostates of the true faith -- a death sentence in the eyes of the jihadists. And the Turkmen have no allies in Iraq.

After IS took control of the Iraqi cities of Mosul, Tikrit and Hawijah with little resistance, they launched attacks on villages surrounding Amirli in mid-June. Well-equipped with materiel captured from weapons depots belonging to a number of Iraqi army divisions, they quickly overran several settlements in the area. By the middle of July, only Amirli was still holding out.

Around 400 militiamen, together with a few soldiers and policemen, are defending the city. Amirli native Mustafa al-Bayati, a colonel from the police force, is their commander. "The IS has tanks, dushkas (machine guns), Katyushas (rocket launchers) and they are too strong," he says. "They attack from everywhere around Amirli: south, north, east and west. Day-by-day they come, more and more."

On July 22, the IS cut off power to Amirli and severed water supplies two days later. All mobile phone towers have likewise been blown up or shot to pieces.

"At the beginning, people had something to eat," says Mohammed Isma of the Iraqi Red Cross. Isma is from Amirli and is attempting to mobilize aid for the town from his base in Baghdad. "But two months is a long time and now it's run out. One month ago, we finished everything."

Amirli, he says, was never well-off, but now the poorest families have nothing left. There are also pregnant women in the city -- Dr. Mahmoud says there are 300 -- along with the many wounded and the sick, he adds. "If nothing changes, it's a maximum of three weeks before many people will begin dying of starvation."

The only help for those trapped in Amirli comes from the air. Every two or three days, an old army helicopter from Baghdad lands with munitions, food and medicine, but it is never enough. Two weeks ago, Red Cross representative Isma joined one of the flights. When they landed, he says, the wounded with their families had "their arms stretched out like people drowning in water," he recalls.

The whole time, Isma says, IS fighters were lobbing grenades at the landing site. But everyone wants to get out, which is why they expose themselves to the danger. "They say, 'We'll die anyway if we stay,'" Isma says. Seven patients were loaded onto the flight Isma was on. There wasn't room for more.

Isma speaks in a calm voice when he tells his story, but he too is sick with worry. His parents, six sisters and a brother all remain trapped in Amirli. He could perhaps get them out with a helicopter. But people in Amirli know them and are aware of Isma's job with the Red Cross. He worries that if people saw them being evacuated, the "would know the game is up" and that panic might break out.

It has been more than a month since the last known residents were able to escape the town on their own. "We left on foot," carrying just a small bag, recalls Ali Abd al-Rida, who fled with 32 family members. They left in secret, not even daring to tell their friends and neighbors of their plans, worried that if too many people tried to escape on the discreet path leading past IS positions, the Islamists would be certain to discover them. Ali Abd al-Rida says that the IS discovered the path three days later and closed it off.

The elderly man and his family found their way to a refugee camp in Kirkuk, the closest large city to Amirli, figuring they would be safe there. But two weeks ago, a car bomb exploded next to a construction site of a mosque in the city where refugees, most of them from Amirli, had sought refuge. Twelve were killed and 50 more wounded.

Abd al-Rida says that the jihadists tried to get the people of Amirli to surrender, promising through middlemen that a deal could be reached. "Send us Colonel Mustafa and Captain Hassan and we will open the road," they offered, according to Abd al-Rida. "But people refused."

Those best positioned to help the trapped people of Amirli are just 12 kilometers away. Here, on a hill overlooking the frontlines, the southernmost checkpoint belonging to the Kurdish peshmerga fighters is located. The exterior wall is pockmarked with bullet holes and a couple of RPG craters.

Inside, though, soldiers sit around lethargically in the sweltering heat. The commander isn't here, says his deputy, Colonel Omid Abd al-Karim, adding that not much has happened since a big attack a month previously.

"It has been calm here since the last attack a month ago," he says. The Iraqi army, he says, tried to save the people of Amirli not long ago. "Before they went, I told them it would not be successful, but they didn't listen," another officer says. An attack on the IS "would be easy with good weapons and air support, but we don't have any," Abd al-Karim says. The message is clear: Amirli is a problem, but not theirs.

As is so often the case in Iraq, there is a story behind the story, stretching far back into the past. Under Saddam Hussein, the Shiite Turkmen were tormented before being terrorized by al-Qaida. In 2007, four-and-a-half tons of explosives hidden under melons detonated in the market square, killing more than 150 people.

'All of Us Are From Amirli'

Because the Iraqis didn't protect them, the Turkmen from Amirli remained loyal to Turkey and Ankara was more than happy to act as their patrons and the Turkish government supported Turkmen parties in northern Iraq. But the alliance brought the Turkmen into conflict with the Kurds, whose help they now so badly need. They certainly can't count on Turkey, which is currently staying out of the conflict out of fear for the lives of 49 Turkish hostages currently being held by the IS.

The result is that nobody feels responsible for the people of Amirli.

"It would be useful if the US conducted airstrikes here," Kurdish party functionary Hassan Baram says in his office in Tuz Khormato, the last town before the front. "But I think they haven't," he adds, downplaying the seriousness of the situation in the city, "because nobody has been killed in Amirli and nobody is fleeing."

Baram's office has no windows, the result of a car bomb a couple of months ago, and the facade is threatening to collapse. "We have almost constant contact with Amirli. We want to go free them, but it's not easy," he says.

The US too has recognized the precarious situation in Amirli. "We are aware of the dire conditions for the mainly Turkmen population in Amirli and the ongoing humanitarian crisis throughout northern and central Iraq," reads the statement of a State Department official who asked not to be named. Both Chairman of the Joint Chiefs of Staff Martin Dempsey and Secretary of Defense Chuck Hagel have publicly discussed the possibility of a far-reaching operation against the IS, including airstrikes in Syria as well. But it could be some time before such an offensive becomes reality.

Last Thursday, Colonel Mustafa al-Bayati was once again waiting for the arrival of the next helicopter, well within range of the IS fighters. He says that almost half the force under his command is wounded and around 20 of them have died. "I don't know how long we can protect Amirli," he says. "But we're going to fight until we die. It's our town. I'm from Amirli. All of us are from Amirli." 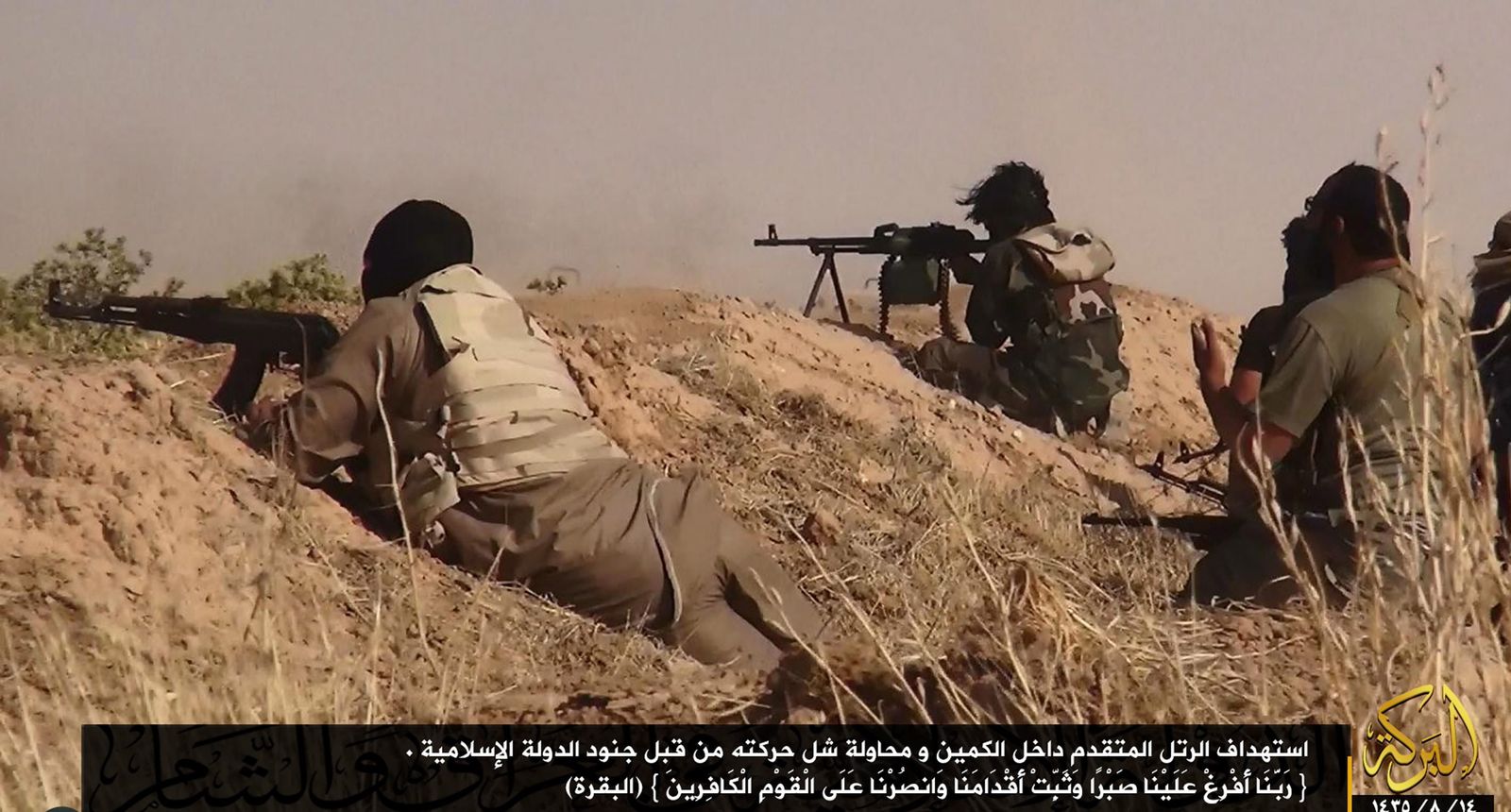 An IS fighter in Iraq. The Islamists are well equipped with tanks, machine guns, rocket launchers and rocket-propelled grenades. In addition to taking large swaths of Iraqi territory, they have also conquered several Iraqi army weapons depots. 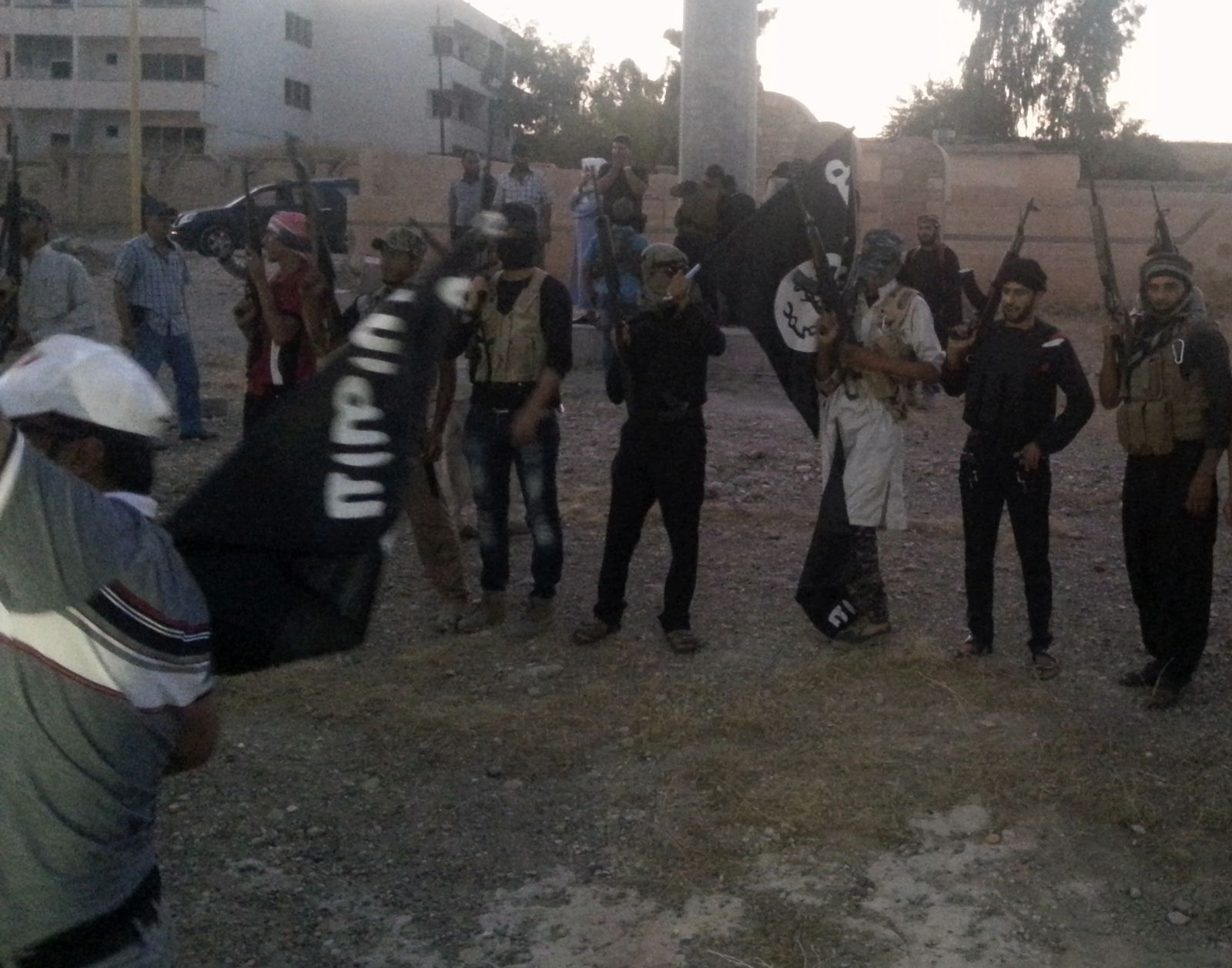 Islamic State fighters in Mosul. "It's like genocide," says Dr. Khaldoun Mahmoud, a doctor in Amirli. The IS "attacks women, children soldiers, they don't differentiate between them."