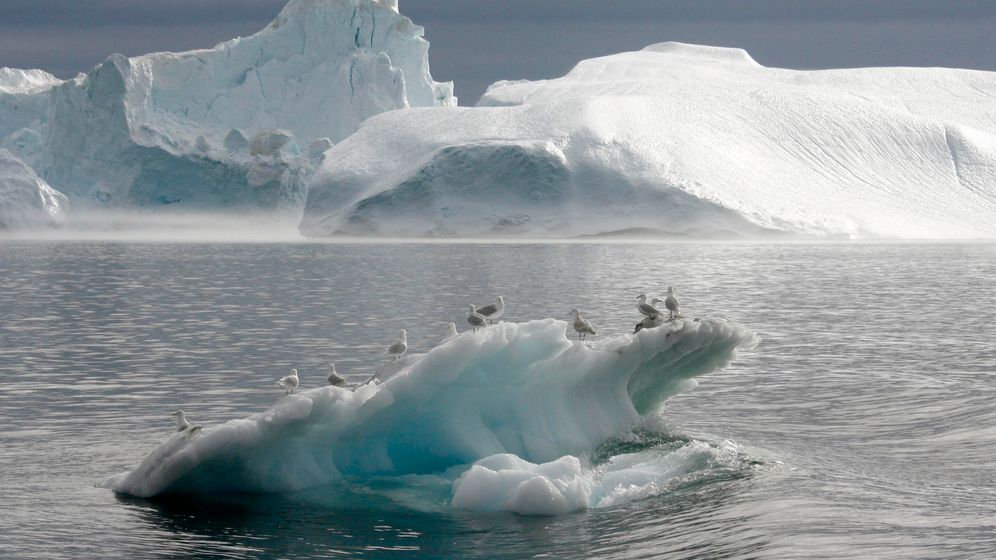 When presented as a globe, the Earth looks as round and smooth as a billiard ball. To anyone standing on a beach, the ocean looks as flat as a pancake.

But perception is deceptive. "In reality, the water in the oceans wobbles all over the place," says oceanographer Detlef Stammer. He isn't talking about waves, but large-scale bulges and bumps in the sea level.

Stammer, who is the director of the Center for Marine and Climate Research at the University of Hamburg, is familiar with the incorrect notions that lay people have, which is why he likes to present them with two numbers to shatter their illusions. "In the Indian Ocean, the sea level is about 100 meters (330 feet) below the average, while the waters around Iceland are 60 meters above the average."

The incorrect belief that ocean water is evenly distributed lives on in the debate over climate change, says Stammer. The rising sea level is widely viewed as the most threatening consequence of global warming. Images of Bangladeshis wading through floodwaters are a favorite horror scenario used by some environmentalists. "But people act as if the water from melting glaciers were distributed as uniformly in the oceans as the water in our bathtubs at home," says Stammer.

But the reality is counter-intuitive. According to the most recent estimates, the sea level is expected to rise by about 1 meter (3.28 feet) -- on average -- in the next 100 years. This is the number that will be mentioned again and again during negotiations at the United Nations Climate Change Conference in Cancun, Mexico over the next two weeks. "But this average value doesn't really help coastal planners," says Stammer.

It is certainly correct that the total amount of liquid in the oceans is increasing. But the way water expands in ocean basins differs widely. There will be regions of the world where nothing much will change, while the sea level will rise by well over the 1-meter average in others. "The sea level could even fall along some coasts," says Stammer.

Scientists still don't know exactly the degree to which glaciers will melt as a result of rising temperatures. The most important factor in this equation will be the rate at which the Greenland and Antarctic ice sheets shrink. At the moment, it appears that the net amount of melt water is still rising in Greenland. It is currently at 237 cubic kilometers (57 cubic miles) per year. But the volume of ice at the South Pole seems to be generally stable. "The ice is melting in western Antarctica, but in the larger eastern part, snow is actually building up," says Stammer.

The sea level currently rises by about 3 millimeters (0.1 inches) a year on average. A number of factors contribute to this rise, including water from melting glaciers and the constant increase in the amount of ground water used in agriculture. It is also partly due to a simple thermal effect: Because water expands as it gets warmer, rising temperatures cause the sea level to rise. All of this will accelerate even further by the end of the century, leading to a total increase of 1 meter, according to the current consensus among oceanographers.

In reality, the simple message of rising waters is greatly oversimplified. The process behind it is highly complex, and one that will produce winners and losers. Scientists are only gradually beginning to understand the phenomenon and its processes, some of which work in opposing directions. "It's just in the last few years that science has taken a more in-depth look at regional prognoses for rising sea levels," Stammer says.

This is partly due to the complexity of the material itself. Average values can be computed relatively easily. Regional effects, on the other hand, are partly influenced by winds and currents, with gravity and the laws of thermodynamics also playing an important role. Making sense of how all of these factors are interrelated requires a relatively solid understanding of the individual processes -- and massive computing power to perform the calculations.

For a long time, scientists didn't even have precise data on specific water levels in individual locations around the planet. That changed in late December 1992, when a satellite was placed into service that uses a radar altimeter to measure the sea level, to within a few centimeters, anywhere in the oceans. "In the past, we had to travel around the ocean and painstakingly take measurements," says Stammer. "Today I can go on the Internet and download the satellite data from space onto my computer."

The flood of data from the orbiting satellite has produced all kinds of surprises for scientists in recent years. For instance, while seas have risen by about 15 centimeters in the tropical Western Pacific, the ocean near San Francisco has fallen by about the same amount. "On the German coast, on the other hand, the sea level today is a few centimeters higher than it was 15 years ago," says Claus Böning of the Kiel-based excellence cluster "The Future Ocean."

Such effects are the result of natural fluctuations that unfold over decades. The currents in the world's oceans are constantly shifting. This applies to the Gulf Stream, which provides Europe with warm water, just as it does to the Pacific circulation system, which reacts to the moods of El Niño.

But what role do anthropogenic greenhouse gas emissions play in terms of the planet's rising sea levels? Newton's law of gravity provides the scientists with an initial answer.

If the Greenland ice sheet, which is 3 kilometers (1.88 miles) thick in some places, were to melt completely, sea levels would rise by 7 meters on average. It would take many centuries before the 3 million cubic kilometers of glaciers ended up in the ocean. But people living near Germany's North Sea coast would hardly even notice, because the sea level there would remain virtually unchanged. The water would even subside off the coast of Norway. "And, purely theoretically, the sea level would actually fall by several meters off the coast of Greenland," Stammer explains.

This striking effect is based on the law of gravity, which states that every mass attracts every other mass. Water levels are higher off the coast of Iceland for the same reason. Volcanic activity pushes heavy masses of rock out of the Earth's interior, and those masses attract water like magnets. By contrast, sea levels are lower in the Indian Ocean because, eons ago, a meteorite most probably knocked so much rock out of the Earth's crust there that the gravitational force attracting water was reduced.

If the Greenland ice sheet shrinks, the island will lose mass and, along with it, gravitational force. As a result, much less water will accumulate off the island's shores than today. To a lesser extent, the same effect is present in the oceans of almost the entire northern hemisphere, including the North Sea. New York, to give another example, would also not get the full amount of the 7-meter sea level rise, but only half of it.

The Victims of Sea-Level Rise

North of a line that passes from Newfoundland through the Atlantic and the North Sea, the sea level would fall. In return, the nations bordering the entire Indian Ocean and the Pacific, as well as the countries of South America and Africa, would be the true victims of a global rise in sea levels.

In those regions, the oceans would not just rise by the average of 7 meters, but by as much as 8 or even 10 meters. "Of course, this is only a theoretical model," says Stammer, the oceanographer. Conversely, if the Antarctic lost ice mass, the effects would be felt more strongly by coastal residents in the northern hemisphere. To a certain extent, the two effects in the far north and the far south could offset each other. If the Arctic and the Antarctic thawed at the same rate, the region in the middle would be the most severely affected.

Scientists at Princeton University recently published a model-based calculation of rising sea levels in the journal Climate Change. The model also includes effects that result from geophysical force, namely the effect that the Earth's rotation has on sea levels. "In this way, we are incrementally approaching the true distribution of the rise in sea levels," says Stammer, who will be one of the authors of the next global climate report by the Intergovernmental Panel on Climate Change (IPCC), to be released in 2014. The report "will contain, for the first time, a separate chapter on this issue," says the scientist.

As if all of this weren't complicated enough, sea levels are also affected by winds and currents, which are themselves changing as a result of anthropogenic climate change. Claus Böning, the Kiel-based oceanographer, sees this as the real challenge for members of his profession.

For the atolls in the tropical Pacific, which are barely a meter above sea level, everything depends on the future development of the El Niño phenomenon, says Böning. Polynesia, for example, had to cope with a sea-level rise of up to 15 centimeters in only four years, from 1996 to 2000. "This exceeds the rise caused by global warming by almost a factor of 10," says Böning. If El Niño gets stronger, the Pacific islands could be in serious trouble.

The critical phenomenon for Western Europe, on the other hand, is the Gulf Stream, which is part of the massive trans-Atlantic circulation system. Like a pump, it pushes masses of water northward, where they sink into the depths of the northern ocean. "This is why the sea level is a meter lower in the northern part of the Gulf Stream than in the south," says Böning.

But this gradient shifts when the Gulf Stream changes its position, which it does as part of a completely natural cycle. This explains why the sea level in the Labrador Sea off the eastern coast of Canada rose by 8 centimeters between 1993 and 1998. Then the rising trend stopped and was reversed. "We have paid little attention so far to this up-and-down, because it was only fluctuating within a manageable range," says Böning.

But the scientist fears that this delicate balance could tip during a warmer future on greenhouse Earth. In addition, the computer models predict that the Gulf Stream will weaken by about 25 percent. Böning warns that this could cause the sea level to rise by about 20 centimeters in the North Sea.

Europeans also need to keep an eye on the possibility of a significant shift in the prevailing wind directions. "For us, this could mean low-pressure troughs over the North Atlantic," says Böning.

But this is precisely where the precision of the climate predictions reaches its limits. "Of course," as Böning openly admits, "they are fraught with uncertainty, which also applies to our models for the rise in sea levels."

The oceanographer is well aware that this message is not very satisfactory for politicians who are expected to make decisions in Cancun. That's why he emphasizes the principle of foresight. "We should prepare ourselves for unpleasant surprises," says Böning.

Despite the many unanswered questions, there is one thing scientists know for certain: The land along the German Bight is sinking by a millimeter a year. That effectively means a 1-millimeter increase in sea level along the coast every year.

This phenomenon is also attributable to climate change, but in this case humans are not at fault. Because the massive weight of the Ice Age glaciers is no longer pushing down on Scandinavia, the land there is rising. Farther south -- just like on the opposite end of a child's seesaw -- the land is sinking.