That US diplomats posted in Bern were upset by the efforts of Swiss Foreign Minister Micheline Calmy-Rey to intervene in the conflict surrounding Iran's nuclear program in 2006 and 2007 and force themselves on the United States as an intermediary is well known. But just how upset has now become clear from the confidential diplomatic cables released by WikiLeaks.

In February and March 2007, Calmy-Rey dispatched Michael Ambühl, a high-ranking Swiss diplomat, on several visits to Tehran in an attempt to persuade the Iranians and the US to engage in bilateral talks. As part of the same effort, she hosted Iran's then chief nuclear negotiator, Ali Larijani, for talks in Bern. Washington had vehemently tried to dissuade Calmy-Rey from assuming such an active role; but that didn't stop her.

The concern over an active Swiss role arose from the 1979 hostage crisis in Tehran, which saw Iranian students and militants raid the US Embassy in Tehran and take 66 Americans hostage. Since then, Switzerland had been representing US interests in Iran. Washington was concerned that, when it came to the nuclear dispute with Iran, Tehran might mistakenly assume that Switzerland was acting as its proxy in this case as well.

For her part, Calmy-Rey had for years been trying to transform Switzerland into a more prominent political actor on the international stage by pursuing a so-called "active neutrality policy." These efforts have been a controversial from the very start -- even among politicians in the Swiss capital. When it came to Iran, the US saw Swiss activism as a dangerous annoyance. Ambühl, however, made clear to the US that he was acting under great pressure from Calmy-Rey.

According to the US cables, Switzerland's Iran initiative was launched in late 2006. At the time, several prominent American politicians, including former US Secretary of State James Baker, were also calling for direct talks with Iran. On November 27, Ambühl told US Ambassador Peter Coneway in Bern of a visit with Baker in Houston. He also had some advice. "The US government, Ambühl quipped, should no longer 'out-source' foreign policy to the EU-3, but meet bilaterally with Iran, lay the framework for broad dialogue, and then bring in multilateral partners," the dispatch reads.

The Swiss had received unofficial reports that Tehran was hoping to re-establish relations with the international community. The brother of former Iranian President Hashemi Rafsanjani had asked diplomats at the Swiss Embassy in Tehran to open up unofficial channels to the United States -- though it was unclear exactly on whose behalf he was acting. Ambühl told Coneway that Switzerland would be more than happy to perform the role of intermediary between the United States and Iran -- "official, unofficial, or proxy level."

In his report on the exchange, Coneway commented: "Past Swiss offers to mediate with Iran have prompted unenthusiastic replies in both Washington and EU capitals.... Switzerland serves US government interests well as Protecting Power in Tehran. However, we defer to the (State) Department on how useful the Swiss contribution could be in our broader policy with Iran."

On Dec. 23, 2006, the UN Security Council passed Resolution 1737, which initiated sanctions against Iran for refusing to put a halt to its uranium-enrichment program. In February 2007, Ambühl flew to Iran as part of a "hastily arranged trip."

The trip turned out to be a failure -- and one that provoked an unusually direct response from the US ambassador: "Perhaps the most notable aspect of Ambühl's discussions in Tehran was the sense he and his Swiss colleagues felt that the Iranians were actually hoping to address the United States by proxy, given Switzerland's status as protecting power." Coneway's conclusion is devastating: Although no one had floated the idea of having Switzerland serve as an intermediary, he writes, "Ambühl is determined to be helpful and will certainly look for opportunities to do so. That said, we have no doubt that Ambühl understands the US government's views on such 'helpfulness.'"

Switzerland Refuses to Take a Backseat

Less than two weeks later, on February 16, Ambühl and Coneway met again. The US ambassador wanted "to discuss recent Swiss meetings with Iranian officials and to convey US government concerns that Swiss actions might be misinterpreted."

Swiss initiative, the US was concerned, might create a false impression -- namely, that the US was trying to use Switzerland to initiate talks with Iran. And Switzerland, it would seem, was indeed eager to take on such a role. But their enthusiasm was certainly not shared in Washington.

Coneway called Ambühl and told him to put everything on ice. He said that Tehran would know how to initiate negotiations should it wish to do so. Swiss silence on the issue would speak louder than words, he said. Furthermore, he said, it would be helpful were Switzerland to refrain from initiating any further dialogues because sanctions needed time to take effect.

But Ambühl disagreed. There were advantages, he felt, to repeatedly reminding Tehran about concerns shared by the international community. What's more, he advised the US to enter into direct talks with Iran because it would put Washington firmly in the driver's seat. He viewed the United States as a privileged partner, he said, and noted that he briefed the US on his meetings with Iranian officials even before reporting to the Swiss government.

In response, Coneway asked to also be briefed prior to any meeting Ambühl held with the Iranians, arguing that it had been "awkward" to first learn about an upcoming meeting between Calmy-Rey and Larijani after a Swiss media outlet contacted the US Embassy for comment.

In conclusion, Coneway writes: "Ambühl has a mandate from Foreign Minister Calmy-Rey to maintain dialogue with all of the key parties in the Middle East, including Iran. Our repeated warnings to Ambühl regarding the risks of this outreach can influence how the Swiss go about this dialogue, but probably not stop it altogether. Urging a 'moment of silence' may be the most reasonable approach at the moment."

On March 9, Ambühl informed Coneway and Daniel Fried, America's top diplomat for Europe, that he was planning a trip to Iran in three days because Mohamed ElBaradei, then-director general of the Vienna-based International Atomic Energy Agency (IAEA), had encouraged him deliver a message to the Iranians. ElBaradei had reportedly told then-US Secretary of State Condoleezza Rice that "we have to use the Swiss" in order to pressure Iran to comply with the UN Security Council resolution. Although ElBaradei did not relay Rice's answer, in an embassy dispatch from March 16, Fried and Coneway "cautioned strongly against the visit."

Ambühl had reportedly told the Americans that he wanted to inform the Iranians that this was their "last chance." He conceded that the Swiss effort had an estimated 30 percent chance of success, but said the visit was a minimal risk for what could be a much larger reward.

Ambassador Coneway is quoted as saying that this was a very delicate phase in the conflict with Iran, adding that the best policy for Switzerland would be to keep a low profile. Fried went on to say that these kinds of initiatives could also encourage the Iranians to continue playing games by driving wedges into the unified front presented by the international community. He also said that Switzerland's status as a protecting power could lead Iran to wrongly interpret their talks with Swiss diplomats.

Fried urged Ambühl to not make any more plans before he, Fried, could consult with Washington. Should Ambühl go anyway, Fried told him to make it clear to the Iranians that he was not speaking on behalf of the US. Ambühl replied that he would -- and then added an odd plea. "Ambühl asked for understanding of the difficult situation he was in (we surmise this means the directive from Foreign Minister Calmy-Rey to engage with Iran on this issue)," Coneway's report on the meeting reads.

That night, Coneway telephoned Ambühl once more to inform him that the stance of the US government was unchanged and clear: The Swiss proposal was nothing new and the visit was in extreme danger of being wrongly perceived by Tehran. The final decision, he allowed, was Switzerland's alone to make. On March 12, Ambühl flew to Iran.

Coneway cabled to Washington: "Ambühl was noticeably uncomfortable not taking the US government's advice. But, there is little surprise in his decision to go forward with the visit, given the clear mandate he has received from Swiss Foreign Minister Calmy-Rey."

Coneway cabled the State Department with his suggestion for solving the Swiss dilemma. Even if Ambühl doesn't have anything new to say, he should still be asked to come to Washington for a meeting. "The meeting could allow Ambühl to share in greater depth the Iranian reaction to the Swiss proposal and provide the (State) Department an opportunity to reinforce the US government position on Iran with the Swiss."

In other words: It is time for Washington to tell the bothersome Swiss in no uncertain terms that they should stop meddling. 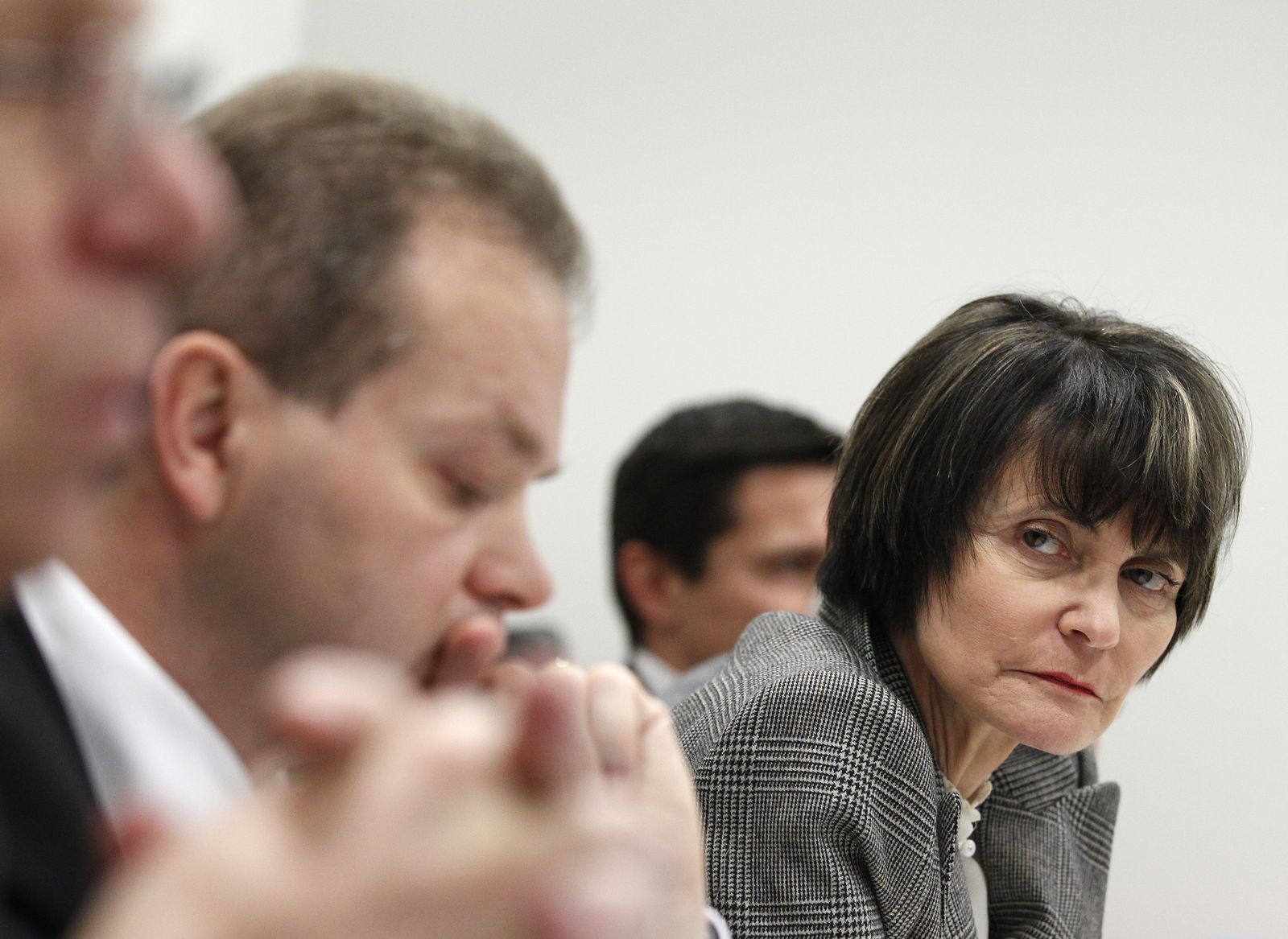