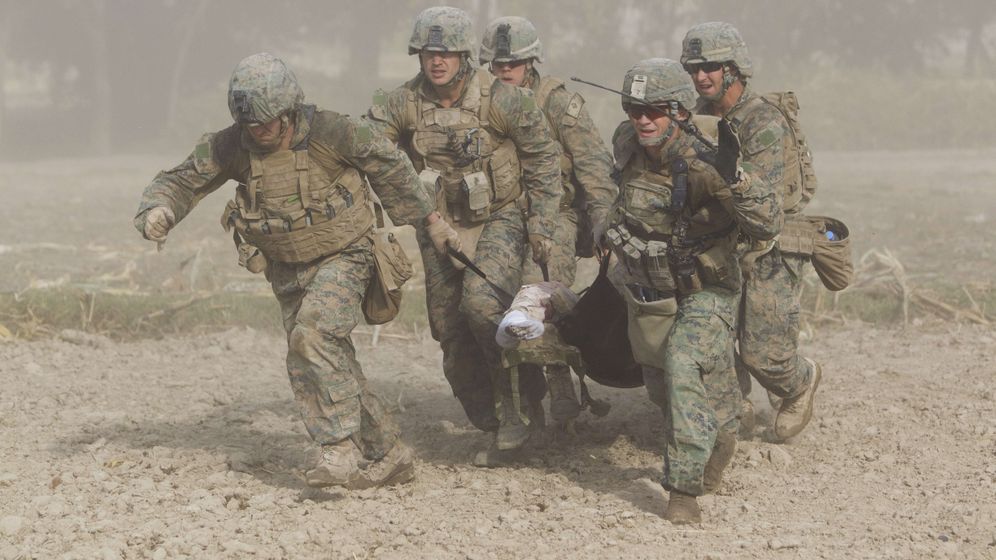 Photo Gallery: The Tribulations of War

Janice Haaken specializes in people with mental challenges. She's studied them at hospitals, in refugee camps and in prisons. A professor at Portland State University in Oregon, she has carried out research for 35 years on ways for therapists to help the mentally ill.

Recently, Haaken has shifted her focus to her own profession, to her colleagues. She's seated at her desk, as a video on her computer shows therapists talking about their fear of becoming overburdened themselves, and complaining that their profession threatens to destroy them.

These clips come from "Mind Zone," Haaken's documentary about American army psychologists who treat psychologically traumatized soldiers on the frontlines. To make the film, Haaken traveled to Kandahar, Afghanistan, with the 113th Army Combat Stress Control Unit, a unit of army doctors and therapists. The US Army's generals welcomed her there. "They wanted to show how much they're doing for their soldiers," Haaken says.

Yet the scenes Haaken plays from her documentary reveal frustration. One of the psychologists complains that he feels his real duty is not to heal soldiers but to send them right back into battle. As a therapist, he feels, it's his job to search for these soldiers' buried psychological trauma, but as an army employee, his role is to provide a quick, makeshift fix.

Haaken's film serves as a 55-minute cry for help. "Within the military system, there's a danger of therapists becoming accomplices," Professor Haaken says, explaining that she no longer sees them as therapists but as efficient military recruiters.

This issue drew attention even before US Army Staff Sergeant Robert Bales' shooting spree. But his case provides immediacy to the question. Bales, 38, snuck out of his base in Kandahar early on the morning of March 11 and shot 17 Afghan civilians, including nine children, in a nearby village. President Barack Obama called the episode "heartbreaking."

In any war, there are cases of soldiers becoming brutal, torturing other people, humiliating others or killing at random. But it happens more when an army draws in its recruits with false expectations and fails to prepare them sufficiently before sending them to the frontlines; when soldiers are driven by a desire for money and adventure; and when pictures like those from Abu Ghraib prison seem to offer a free pass for the use of violence.

Last year, photographs revealed a rogue "kill team" of American soldiers, who killed Afghan civilians for sport and then posed next to the dead bodies. The soldiers came from Joint Base Lewis-McChord, near Seattle, the same place Robert Bales served.

Then this January, a video was made public in which a group of GIs urinated on the bodies of Afghans who had been killed. In February, American soldiers burned several copies of the Koran. Last week, a further 18 gruesome photographs came to light, showing American soldiers -- paratroopers from the 82nd Airborne Division -- posing with maimed body parts. Is the American military sending "lunatics" to Afghanistan, as Taliban propaganda would have it?

Experts estimate that up to 20 percent of American soldiers returning from Iraq or Afghanistan may suffer from post-traumatic stress disorder (PTSD), and that only half of them are treated. Many soldiers simply struggle through on their own, because they fear the stigma attached to mental illness -- or because their superior officers advise them not to make such a fuss. The United States has a nearly invulnerable high-tech army, yet the country's soldiers themselves seem more vulnerable than ever.

Something Not Quite Right

The US Army insists it's taking the problem seriously, saying it spends around $6.2 billion (€4.7 billion) a year to treat mental illness and that the number of army psychologists has nearly doubled in the past five years.

"But psychologists and military leadership will never work in concert, no matter how deftly leaders try to sell that concept," says Stephen Xenakis, a former brigadier general and army doctor. He believes it won't be possible to successfully treat trauma until the commanders of the many small units spread throughout the country recognize that they are the ones primarily responsible for their soldiers' behavior, and that mentally traumatized soldiers need support just as much as the physically injured do.

It seems unlikely this will come to pass in an army that has been engaged in a war against terror for over 10 years. Robert Bales had served three tours in Iraq and his family was hoping he might be relocated to Hawaii or Germany, somewhere far away from the war. But toward the end of 2011, Bales was ordered to Afghanistan.

No one seems to have noticed that even then, something was evidently not right with Bales. He'd gotten into fights while home on leave, received a fine for fraud and was in debt. How closely connected those factors are to his behavior on the front is hard to say. What is known for sure is that Bales was right next to a fellow soldier who was shot and killed in Afghanistan, and that Bales himself suffered a concussion in an accident in Iraq.

Did army doctors know these facts? Bales passed psychological tests prior to his shooting spree, but "the tests are subjective, and the subject can lie," Haaken says, adding that commanders can overrule psychologists' evaluations and are interested in high "return to duty" rates -- getting soldiers back into battle as quickly as possible.

Changing Character of the US Military

Therapy is also expensive. Recently published records show that in 40 percent of cases at one army hospital in Washington state, the diagnosis of PTSD was later rescinded -- presumably because a soldier suffering from psychological trauma can cost the army up to $1.5 million over the course of years.

There's no clearer example of the dilemma surrounding returned soldiers and veterans than Lewis-McChord, the base where Robert Bales was stationed. Military newspaper Stars and Stripes has described Lewis-McChord as the "most troubled base in the military." In January 2010, Joshua Tabor, a soldier stationed at Lewis-McChord who had served in Iraq, was charged with holding his four-year-old daughter under water as if waterboarding her, because she couldn't recite the alphabet.

David Stewart, an army medic who had served in Iraq and was likewise assigned to Lewis-McChord, led police on a car chase in April 2011, after killing his wife and five-year-old son. He then shot himself in the head in view of the police.

Are these insane crimes purely the result of psychological trauma? Another factor that is at least as important in assessing these crimes is the fact that the character of the US Army has changed in recent years. In a war such as the one in Afghanistan, with many small units operating from isolated posts, it's easy for a temptation to arise for soldiers to distinguish themselves through ostensibly heroic deeds. American soldiers are also on average more violent and less well educated than they were in the past, since the standards required for enlistment have been relaxed in recent years, with recruiters focusing primarily on young men with below-average levels of education.

At the same time, technological breakthroughs, for example in cameras and smartphones, make it possible for GIs to document every moment of daily life at war. This leads, for example, to the gruesome photographs recently published in the Los Angeles Times. Lower-ranking officers, non-commissioned officers and staff sergeants -- the ranks that lead units in Afghanistan and elsewhere -- are particularly unequipped to handle their subordinates' excesses, while the centralized supervision by higher-ranking officers that was common practice in the past hardly exists anymore in the guerrilla war being fought in the Hindu Kush.

The US Army has also become more violent in general. Just in 2007, 861 convicted criminals -- convicted of robbery, sexual assault or even manslaughter -- received the exemption necessary to serve in the military. Psychological trauma may explain some atrocities on the frontlines, but statistics such as these also have a role to play in the search for an explanation.

Jorge Gonzalez is well aware of such facts. He is the executive director of Coffee Strong, a café for soldiers and veterans located 300 meters (1,000 feet) from the entrance to Joint Base Lewis-McChord. Gonzalez, 32, fought in Iraq, then left the army after his tour was complete. Now he provides counseling for soldiers who don't want to go to the front.

More than 350 soldiers stop by every month. One 40-year-old man, here using the café's Internet connection, says he has served in the army for 13 years. He was in Iraq, where he saw fellow soldiers die, was himself nearly killed. He also killed enemy soldiers. He struggles to cope with the memories. He never received help, but at Coffee Strong he can talk about his problems. This combination of café and self-help facility is so successful, it now operates branches at American bases in Texas and in Kaiserslautern, Germany.