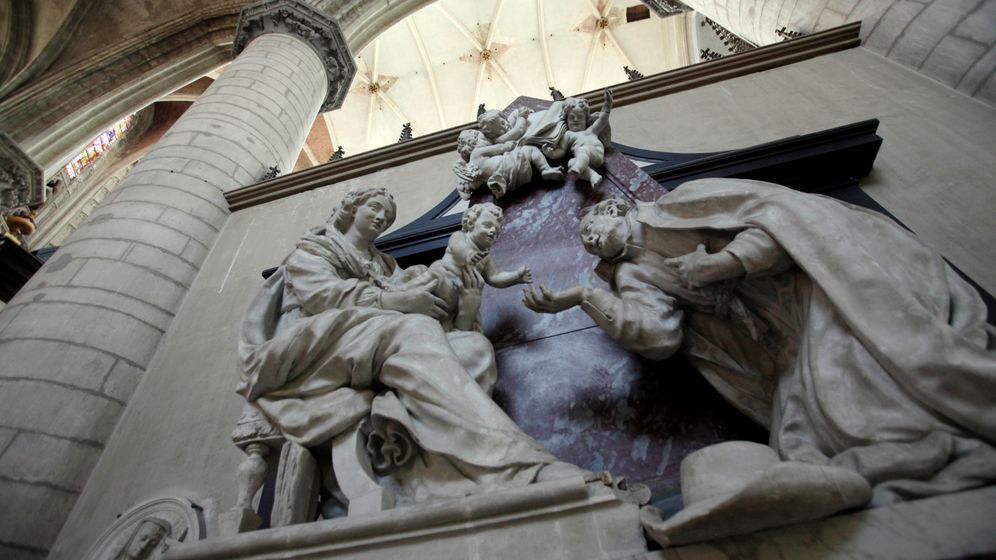 Until shortly past 10:00 a.m. on Thursday morning two weeks ago, Mechelen was nothing more than a squeaky-clean provincial town in the Flemish part of Belgium. It has a history that dates back 1,000 years, neatly renovated UNESCO World Heritage Sites, eight churches and a cathedral -- and it is the capital of the Roman Catholic Ecclesiastical Province of Belgium. At 10:15 a.m. the bell rang at the gate to the archdiocesan palace.

An investigating magistrate and 20 investigators stood at the door to Archbishop André-Joseph Léonard's residence. It was June 24 and the Belgian Bishops' Conference was convening at the palace. Item 5 on the agenda was a contentious issue: what to do with old files on Belgian priests who have sinned against children.

It was these files that had attracted the interest of Belgian investigators. Law enforcement officials received a tip from a retired priest who says that for years he has been providing his church superiors with secret files that prove that priests have been sexually molesting minors. So far, though, says the former clergyman, his information has not been acted upon.

The investigators were thorough. They confiscated mobile phones, appointment books and 55 computers. They then interviewed the church officials until late in the evening. Before the raid was even over, more law enforcement officers entered another building just a few hundred meters away, at 6 Varkensstraat, where they searched the office of Cardinal Godfried Danneels, who had served as the head of the Belgian Catholic community until last January.

No Trace of the Documents

Danneels also had to open his filing cabinets, hand over his laptop and PC, and accompany investigators to the adjacent cathedral. While a crowd of curious onlookers gathered outside, police officers inside the building stood under Gothic vaults and prepared to go to work with dust masks, crowbars and drills. Investigators had been told that burial chambers had been converted into secret archives during renovation work on the cathedral. They drilled holes in the sarcophagi of two archbishops, inserted tiny cameras, but found no trace of any documents.

It is difficult to imagine bishops hiding evidence in tombs as if they were villains out of a Dan Brown bestseller. One is tempted to criticize the investigators of being overzealous had the Catholic Church not already proven itself extremely unwilling to come forward about instances of child abuse in its past.

Even if the raid in Belgium was inappropriate, it is another indication that the scandal-ridden Catholic Church can no longer expect leniency -- neither in Belgium nor in the US, where a week ago Monday the Supreme Court ruled that the Vatican enjoys no immunity in cases of alleged molestation by priests. The ruling means that, in theory, even Pope Benedict XVI could be taken to court.

The message is clear: Should secular justice not receive the requisite support from the Catholic Church, it is no longer going to wait patiently outside the gates.

The Vatican reacted just as it had at the height of the crisis in late March -- by closing ranks. The Holy See sharply criticized the Belgian authorities and immediately summoned the Belgian ambassador.

Vowed to Do Everything Possible

It had taken months for Pope Benedict XVI to comment on the abuse scandals in Ireland and Germany. In April, he met with victims in Malta and denounced the enemy within the church. In early June, he asked for forgiveness for the sins of his priests and vowed to do everything possible to prevent such abuse from occurring again.

But now that secular investigators have decided to take action, he has condemned the "surprising and regretful" circumstances of the Belgian raid. In a message of solidarity with the bishops in Belgium, Benedict argued in favor of cooperating with the secular justice system, but he insisted on the church's right to conduct internal investigations.

Benedict's allies in Rome wasted no time in ensuring that relations between the Catholic Church and the secular world took another turn for the worse. The Italian bishops' newspaper Avvenire sees the desecration of the graves as a "brutal act that strikes right at the heart of the church." Cardinal Secretary of State Tarcisio Bertone -- the second most powerful man in the Vatican -- expressed outrage at the fact that it was possible to hold venerable bishops for so long without food or drink, "as if they were children." Not even under communism were church officials treated as poorly, he said.

After a brief period of remorse, it looks as if everything is back to business as usual at the Vatican. Little appears to have changed.

Even in the sixth year of Benedict's pontificate, the Vatican has yet to provide the national churches with a globally binding policy for dealing with the perpetrators of abuse. It has not said how, under church law, abusive clergymen are to be reported and punished, nor how the Catholic Church will cooperate with secular justice systems.

There are old guidelines, some of which date back to the 1920s. Since April, they have been posted on the Vatican's homepage -- but they are only recommendations, not rules. This persistent refusal to give local bishops greater freedom in dealing with cases of abuse partially explains why an ever increasing number of cases are surfacing in Brazil and Italy -- and now also in Belgium involving bishops attempting to resolve cases of abuse their own way, without reporting them to the Vatican or state prosecutors.

Church officials in Belgium were far more reserved in their comments on the police raids, apparently with good reason. A few days after the police raids in Mechelen, a dozen men gathered on the steps of the cathedral in Brussels. Ten years ago, on Jan. 25, 2000, they said, they along with eight other men told Archbishop Danneels how they had been abused by Belgian clergymen. Danneels had turned them away. He couldn't know, he said at the time, whether they were telling the truth or if it was pure fantasy. Then he urged them to keep quiet about it because their prattle would damage the Catholic Church.

First Ireland, then the US, Germany, Austria and now Belgium -- the Catholic map of the world is rapidly filling with countries where new cases of abuse continue to surface. It has long ago become a global problem, but the Vatican under Benedict XVI is reacting at its own pace. Benedict sees this as caring for his own people, even should they have sinned. From a theological point of view, whether he is guilty or not, a priest remains a priest for all of eternity, and only the headquarters -- at least in the Vatican's view -- can conduct a trial against black sheep in accordance with canon law.

Straying from the Flock

This has led to a power struggle between liberal and conservative forces in the Vatican. The conservatives in the church state see the zero-tolerance policy of US bishops as a means of curtailing the rights of accused priests. By contrast, liberal spirits are pushing to rapidly investigate and refer cases to secular authorities.

It currently looks as if the conservatives have regained the upper hand. A week ago Monday the Viennese Cardinal Christoph Schönborn traveled to Rome. He is widely seen as the most courageous advocate for clearing up cases of abuse. Schönborn came to receive a personal reprimand from the pope because he had accused a fellow cardinal of stonewalling abuse investigations for many years. Only the pope is allowed to reprove a cardinal -- no one else.

German bishops Robert Zollitsch and Reinhard Marx were also given a dressing down. Benedict reproaches them for not being tender enough with their fellow bishop Walter Mixa when he came under fire amid allegations of violence towards children in his care.

The Holy Father has clearly shown how to treat, in the true Christian spirit, those brothers who have strayed from the flock. He announced that, "following a period of healing and reconciliation," Bishop Mixa, like other retired bishops, would again be available for pastoral duties.