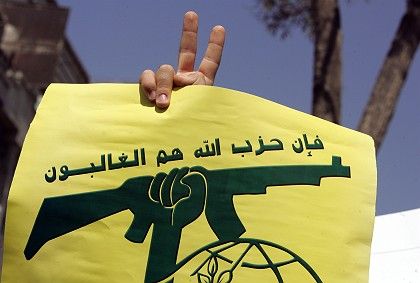 Lebanon may have averted civil war, but the real victor is Hezbollah.

Anyone looking for traces of violence will quickly find them in the streets of Beirut. The worst of the potholes, barely more than three weeks old, are the handiwork of the Hezbollah "devils" and their enemies, says a frustrated driver in the city's Bashura district. The militia fighters set fire to tires that burned for days, burning holes into the asphalt.

Farther south, in the Shiite neighborhood of Haret Hraik, the streets are in even worse condition, with gaping craters left over from the Israeli bombardment in the 2006 war. But billboards for the Waad construction company, which has close ties to Hezbollah, promise that the area will soon be transformed into a blossoming landscape of tree-lined streets and larger, more attractive buildings.

Hezbollah's newly confident party leadership is even allowing foreign visitors into its bastion once again. Nevertheless, this has done nothing to change the fact that Haret Hraik is in a state of emergency. In the heart of the radical Islamic movement, the group's own security forces continue to provide order. In fact, regular Lebanese police and soldiers have never been welcome in the Shiite neighborhood. And since the bloody fighting over control of Beirut three weeks ago, and the triumphant victory of Hezbollah leader Hassan Nasrallah, this is now unlikely to change.

Hezbollah has further expanded its position as a state within a state, and it has remained unimpressed by an international monitoring effort by a fleet of UN peacekeeping vessels off the coast, which were deployed to prevent the smuggling of weapons into Lebanon. During peace talks between the parties to the conflict in the Emirate of Qatar last week, almost all of the "Party of God's" demands were met. The pro-Western coalition government of Prime Minister Fuad Siniora, on the other hand, was forced to make many concessions.

Hezbollah and its allies, the Shiite Amal Party and the Free Patriotic Movement of Christian General Michel Aoun, are expected to receive 11 cabinet posts in the new government of national unity to be formed in Beirut. This bloc will be large enough to veto any cabinet decisions in the future. Most of all, the Qatar agreement allows Hezbollah to keep its weapons, a sensitive issue that all parties to the talks were quick to remove from the agenda.

The agreement puts to rest the greatest domestic political crisis in Lebanon since the country's civil war ended in 1990. "The country would not have withstood another week of fighting," says political scientist Amal Saad-Ghureib. "Now pro-government Lebanese citizens can also breathe a sigh of relief, because after an 18-month standstill, there is finally some movement." The hope is that with the new president, the popular former chief of the Lebanese armed forces, General Michel Suleiman, who was elected by parliament on Sunday, and a government of national unity, the divided country will finally find peace.

Suleiman re-appointed Siniora as Lebanon's prime minister Wednesday. The nomination was backed by 68 out of 128 members of parliament, but the opposition was clearly dissatisfied with the choice. "His nomination is a recipe for conflict rather than reconciliation," warned Aoun. Siniora began consultations to form a new government on Thursday.

Various intelligence services have long been warning of Hezbollah's regaining strength. Intelligence experts believe that the militia replenished, and even doubled, its arsenal after the summer war against Israel in 2006. Hezbollah is now believed to have 27,000 medium-range missiles, some of which could even reach Tel Aviv. 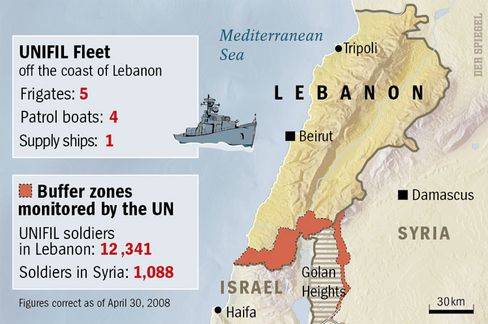 The weapons were purchased with the help of funds from Iran and Syria. In 2007 alone, Hezbollah is believed to have received anti-tank weapons and rocket launchers worth $800 million (€516 million) from Tehran. The weapons were delivered overland through Syria.

Observers consider it a foregone conclusion that Nasrallah is both capable and willing to engage in a new round of fighting with Israel. Political scientist Saad-Ghureib believes that it is not a question of if, but when, this could occur. But the Lebanese Shiite militia could very well find itself losing its strategic partner, Syria, first.

Syria now insists that it wants to negotiate "sincerely and openly" over peace with archenemy Israel. In return for signing a comprehensive treaty, Syria wants the return of the Golan Heights, occupied by Israel since 1967. The agreement would also require Damascus to turn its back on Hezbollah. Syrian President Bashar Assad disclosed the deal, which came about with the help of Turkish mediators, in April, and Israeli Prime Minister Ehud Olmert recently confirmed its existence.

"The Syrian-Israeli talks are currently the most dangerous threat to Hezbollah," says Paul Salem, director of the Carnegie Middle East Center in Beirut. "If the two countries reach an agreement, it could break Hezbollah's back." Salem also believes that Syrian cooperation is currently probably the most promising route to disarming the Shiite militia one day. The more than 12,000 UN peacekeeping troops stationed in southern Lebanon and off the Lebanese coast, says Salem, have clearly shown that they are not up to the task.

This also includes the Germans. After the end of the 2006 war, the Germans initially contributed two frigates, four patrol boats and a supply ship to the UN Interim Force in Lebanon, or UNIFIL. The purpose of the "maritime component" was to block the smuggling of weapons for Hezbollah by sea.

At the time, German Defense Minister Franz Josef Jung grandly referred to the monitoring mission as a "combat mission." "Most of the weapons smuggling occurs by sea," Jung said. "Under these circumstances, it won't exactly be a walk in the park for our ships."

But that is precisely what it is for the flotilla. German statistics report that since October 2006, the crews of 15,292 ships have been questioned to determine their cargo, course, ownership and destination port. In truth, however, this has occurred almost fully automatically using devices known as transponders, which are part of the standard equipment on modern ships and transmit the relevant data automatically. The crews have only occasionally been in direct radio contact with ships. Besides, the German peacekeepers are not authorized to search any ship against the will of its captain.

A total of 74 ships have been treated as suspicious for various reasons, including not adhering to their reported routes. The ships were politely directed to Lebanese ports, where they could be inspected by the -- sometimes pro-Hezbollah -- local authorities. "We have not found any smugglers," the German Defense Ministry in Berlin proudly announced last week. "The tasks that were assigned were successfully completed."

In February, Berlin relinquished its command of the mission. Now only 470 German soldiers, commanded by an Italian general, are left on ships and ashore in Lebanon. They include specialists who are installing radar stations on land that will enable Lebanon to monitor its coastline itself. Unfortunately, even this system is still not operational.

While the UNIFIL fleet is likely to spend a few more years cruising up and down the Lebanese coast, a new government is forming in Beirut. Hezbollah, better armed than ever, is part of that government.