"Moscow Does Not Believe in Tears," is the name of a Soviet-era film that remains popular in Russia. The sentiment itself has not gone out of fashion, particularly when it comes to the tears shed by the Iranian opposition, which -- to go by official results -- lost last Friday's presidential election to incumbent Mahmoud Ahmadinejad. 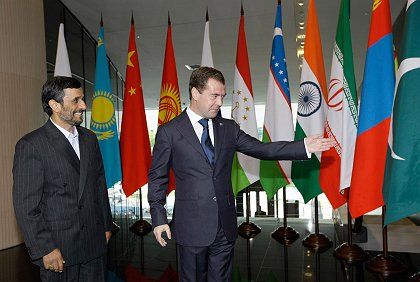 Iranian President Mahmoud Ahmadinejad was in Russia on Tuesday.

Instead, the powers that be in Moscow assume that Ahmadinejad will remain in office for the foreseeable future. "We welcome the newly re-elected Iranian president on Russian soil," said Russian Deputy Foreign Minister Sergei Ryabkov upon Ahmadinejad's arrival at a summit of the Shanghai Cooperation Organization in the Russian city of Yekaterinburg on Tuesday. "We see this visit as a reflection of partner-like, neighborly and traditionally friendly relations between Moscow and Tehran."

The welcome was a clear sign of the Kremlin's interest in distancing itself from the Iranian opposition and the ongoing demonstrations in Tehran. Images of protesters carrying English-language signs on the streets of the Iranian capital have energized many observers in the West, but in Moscow the reactions have been more of a wait-and-see nature. The marches awaken associations of the American-supported "color revolutions" in Georgia and Ukraine, both of which resulted in increased tensions with Russia.

Still, Russian President Dmitry Medvedev has sought to avoid the impression that he is completely on Ahmadinejad's side. A planned bilateral meeting between the two was cancelled this week. Russia, like China, is not nearly as skeptical of Ahmadinejad as many in Europe and the US, but the relationship resembles a pragmatic partnership more than a love affair. Indeed, even as Russia and Iran have a strong, security-based strategic partnership, Moscow has not shied away from criticizing Ahmadinejad in the past. Russian Foreign Minister Sergey Lavrov, for example, recently said the Iranian president's repeated denial of the Holocaust is "completely unacceptable."

Mostly, Moscow is grateful for that which Iran does not say or do. Tehran has long avoided any efforts to export its Islamic revolution to predominately Muslim parts of Russia -- a policy which has earned the Iranians bitter condemnation from Chechen separatists. Furthermore, Iran was instrumental in facilitating the negotiations that brought an end to a post-Cold War conflict in Tajikistan in 1997.

Indeed, Moscow's position is that Iran could end up being a stabilizing factor in Central Asia, by providing reconstruction aid to Afghanistan or Iraq, for example. Russian strategists are also aware that the path toward negotiation with Hezbollah in Lebanon or Hamas in the Gaza Strip leads through Tehran.

Above all, though, Russia values Iran as a business partner. In addition to a healthy arms trade, Iran is a valued customer for Russian nuclear technology. Indeed, the nuclear reactor in the southern Iranian city of Bushehr was built by Russian engineers, with the spent fuel rods returned to Russia for processing. Experts in Moscow are confident that the reactor could not be used to produce highly-enriched uranium of the kind necessary to build a nuclear weapon.

Russia has long urged the West to remain calm when it comes to Iran's alleged yearnings for atomic weapons. Moscow insists that its secret service has no evidence that the country is close to building a bomb. The Russians are concerned about the possibility, to be sure. But Foreign Minister Lavrov has also made it be known that he is equally bothered by the prospect of an Israeli military strike against Iran.

In short, Moscow does not see Iran as a regional flashpoint for instability -- meaning that, from the north, the current mass protests in the country's largest cities look more like a threat than an opportunity. A publication called Red Star, put out by the Russian Defense Ministry, recently elucidated its reasons for viewing Ahmadinejad as a force for stability. "It is because the majority of Iranians see Ahmadinejad as a man of the people who more or less represents the interests of low-wage earners," the paper wrote. Ahmadinejad stands for "simple words and simple ideas that are understandable to the poor in both the cities and the countryside."