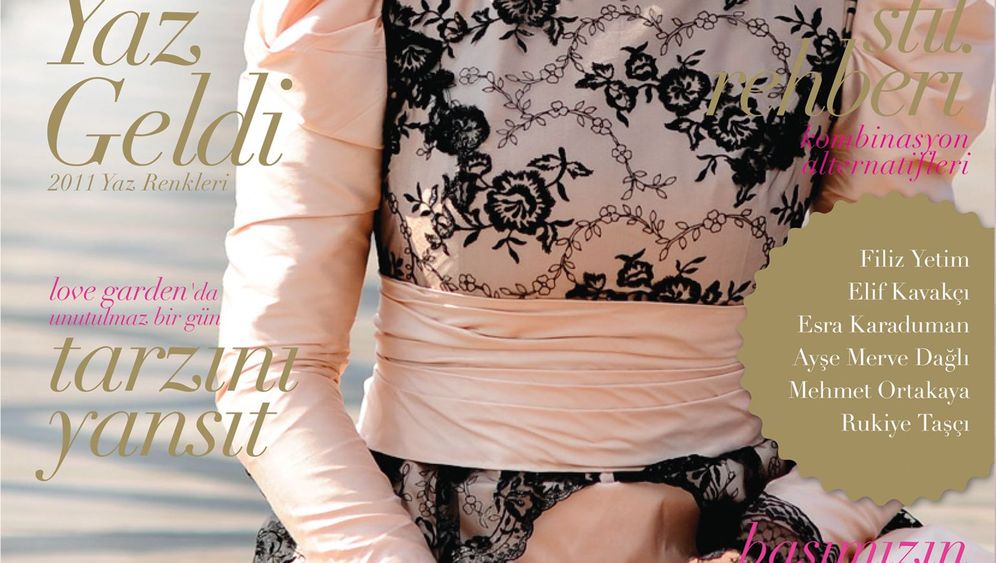 Photo Gallery: Fashion for the Faithful

It wasn't the usual images -- those of long shapely legs and deep cleavage -- that outraged Ibrahim Burak Birer, 31. Rather, it was pictures of penises and of fake, strap-on breasts which convinced him that things were getting out of hand. Birer had happened upon a series of photos on the subject of trans-sexuality printed in a major international fashion magazine.

The photos demonstrated conclusively to him that taboos hardly exist anymore -- and that it was time to come up with something to combat the "diktat of nudity." He knew that he and his team were on the right track.

"Cosmopolitan, Elle, Vogue, Marie Claire, it's all about sex and naked skin," says the devout Muslim. "The motto is that sex sells. But we, and millions of women around the world, believe that fashion can also be different."

Çamlica is a quiet residential neighborhood on the Asian side of the megacity Istanbul. Birer and his friend Mehmet Volkan Atay, 32, two stout men in jeans and designer jackets, are sitting at their desks on the second floor of a white house.

Soft jazz music is playing on a laptop. The two managing directors of Alâ are in excellent spirits, as are the two women who are sitting across from them: Eyma Yol Kara, 28, the editor-in-chief of Alâ, "the magazine for a beautiful lifestyle," and Esra Sezi, 24, the head fashion editor. Both women are young, attractive and wearing headscarves.

Most Beautiful of the Beautiful

The core team of the magazine, which is currently the talk of the country, are perusing the sixth issue of Alâ. It's a complete success, as were the preceding issues, so much so that the magazine has to increase its circulation again, from 25,000 to 30,000 copies. These are impressive sales figures for such a high-gloss product, which only uses models that wear headscarves and only advertises brands specializing in women's clothing that conforms to Islamic customs. Alâ is the avant-garde of "Tesettür," or "veiled" fashion. The name of the magazine, which stems from the Ottoman era, means "the most beautiful of the beautiful."

The liberal daily newspaper Radikal called the fashion magazine "the Vogue of the veiled." The first issue came on the market in June 2011, at a price of 9 lira (€3.90, or $5.10). A smiling model covered in pink material and black lace, looking bashfully at the floor, appeared on the cover. Inside, were articles such as "The Colors of Summer," photos of love-struck, freshly married couples and all kinds of shopping tips -- chaste, but somehow cool at the same time. All of this seemed to suit the taste of conservatives to a T.

"We had no experience with magazines before that. We're marketing people," says Atay who, like his friend, moved to Istanbul from the central Anatolian city of Konya, attracted by the city's gold-rush mentality. "We specialized in recognizing market niches."

A fashion magazine for the devout but consumption-oriented "türban" women -- it was exactly the sort of niche they had envisioned. For years, successful Muslim women have gone to their own hair and beauty salons and vacationed in luxury hotels exclusively for women. Nowadays, especially deep-pocketed members of the Muslim bourgeoisie are turning up in the same fashionable Istanbul shopping centers that were once reserved for the secular elite.

The old culture war over the headscarf -- which until recently seemed acrimonious enough to bring down the Turkish government -- would seem to have been forgotten. The turban, as the headscarf is known in Turkey, is even omnipresent in the secularly-oriented universities. And it is now taken for granted that Hayrünnisa Gül, the president's wife, always wears a headscarf during state visits.

"There is an Islamic faith, and there is a Muslim lifestyle," Atay explains. "Nowadays every lifestyle has its own magazine: sailors, athletes, hunters, musicians. Only veiled women didn't have one of their own. Until now, that is."

Five-thousand Alâ subscriptions are now sent abroad, including 1,500 to Germany, and the numbers are growing. The magazine is reportedly very popular among devout ethnic Turkish women in Germany. Birer says he can easily imagine coming out with a German Alâ, and that it wouldn't be just for Muslim women. After all, he adds, the "battle against nudity" is of interest to all women.

But first the two young publishers have to address objections, not from the secular camp, but from religious scholars. The people behind Alâ have not understood the concept of "tesettür," one theologian grumbled. A woman's desire to present herself is fundamentally un-Islamic, he claimed -- be it in a bikini or in a headscarf. Muslim women, the theologian continued, should remain submissively in the background.

"That's not our understanding of Islam," says Atay. "We don't believe that women should hide themselves. Even the veiled have a right to stylish fashion."