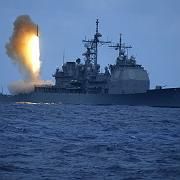 Pornography may be a sin, but when did anyone say it was a threat to national security? Three Japanese sailors have swapped military secrets along with smutty images, according to charges pressed last week by Japanese police. The scandal involves lower-ranking men but could reach higher into the navy's chain of command, and it's especially embarrassing for Tokyo because the leak has compromised an American-designed anti-missile system.

A Japanese paper reported that a 33-year-old petty officer -- married to a Chinese woman -- brought home a CD-ROM containing not just pornographic images but also classified data about the Aegis missile system. Aegis is a ship-based network developed by Americans which Japan has started to use for its own regional defense.

Investigators said none of the men had clearance for the secret information, which included "calculating formulas" for the Aegis interceptor system as well as details on the number of targets it can track. The sensitivity of the data implies that senior officers, with higher clearance, were also involved in the swap. Police suspect that the original source of the top-secret files may have been a lieutenant commander who had been sent to the US to learn how to operate the system.

The Aegis system was first developed by Americans in the 1960s. The US Navy sells the technology to friendly nations, and Tokyo has stepped up its missile defense ever since North Korea fired a provocative test missile last year over the Sea of Japan. (Later North Korea also successfully tested a nuclear bomb.) But the leak is also bad for the U.S. Navy, because Aegis belongs to Washington's ambitions for a vast defense network to protect the US as well as its European allies from missile attack.

American response to the breach, so far, as been tight-lipped. "I know the Japan Self-Defense Forces take operations security seriously," said General Bruce Wright, commander of US forces in Japan.