The border crossing lies in a picturesque plane surrounded by rolling hills, wheat fields and olive groves. This spot between the Turkish city of Kilis and the Syrian town of Azaz is called the "Gate of Peace." But, in reality, it is the gate into the hell of the civil war in Syria.

Seventy-seven trucks and semitrailers are waiting on the Turkish side of the border. Many are crammed full of sacks of grain, while others bear tarp-covered loads. All of this is fresh supplies for the destitute civilians and rebels in the combat zones.

To seal off the insurgents' resupply routes, the military of Syrian dictator Bashar Assad is determined to slam the "Gate of Peace" shut. The task has fallen to Syrian soldiers reinforced by fighters from Hezbollah, the Shiite militia based in Lebanon, as part of a major operation dubbed "North Storm." Assad's generals have become more confident after the army and the Hezbollah Islamists recaptured the town of Qusair, strategically located near the Lebanese border in western Syria, more than two weeks ago.

A rebel fighter dressed in all black is standing at the "Gate of Peace," trying to hitch a ride into the war. Before long, the car reaches the highway that heads south toward Aleppo. Rebels have barricaded the north-heading side of the road with a dirt embankment. An armored personnel carrier menacingly points its cannon northwards. But wouldn't Assad's troops come from the south?

Abu Said, a 24-year-old rebel from Azaz, tries to explain the confusing situation: "Here, we're besieging the Kurdish enclave of Afrin because the Kurds are secretly providing the Shiite towns of Nubbol and Al-Zahraa with supplies even though we have been trying to choke the places off for months." Among others, Syrian and Lebanese Shiites are fighting on the government's side against the majority Sunni rebels in the greater Aleppo area. Kurdish militias allied with the Turkish-Kurdish Kurdistan Workers' Party (PKK) are also engaging in skirmishes with insurgents, although there are also Kurdish units among the latter. And, in the Kurdish neighborhoods of Aleppo, all Kurdish factions -- including those with ties to the PKK -- are firing on government soldiers and Hezbollah fighters.

It has become increasingly hard to retain an overview of the Syrian conflict. But, for the West, it is now more important than ever.

It would now appear that, thanks to Hezbollah's help, the Syrian military is retaking territory and might be able to tip the scales in this appalling civil war. And, last week, the US government confirmed what the British and the French have been claiming for weeks: that the Assad regime has also deployed chemical weapons against its own people. The Americans say that, as far as they know, this has only been done on a small scale, with several attacks having claimed between 100 and 150 victims. Nevertheless, they add, this has sufficed to cross the "red line" that President Barack Obama drew last August, when he said that America would intervene as soon as the Syrian military had used poisonous gas.

The Americans could now supply weapons -- rifles, ammunition and perhaps even anti-tank missiles -- to rebel groups, such as the semi-trusted Free Syrian Army (FSA). This prompted Russia, an ally of the Assad regime, to immediately strike back. On his Twitter account, Alexei Pushkov, the chairman of Russia's parliamentary foreign affairs committee, wrote that "the data on Assad's use of chemical weapons were faked in the same place as the lie about (Saddam) Hussein's weapons of mass destruction," suggesting that the Americans were using a fabricated pretext to be able to support the rebels.

The wrangling over Syria will be one of the main issues discussed at the G-8 summit starting this Monday in Northern Ireland. The group's Western states must decide what they intend to do. While the UK and France back the American position, the German government promptly announced that it would under no circumstances send weapons into the country, which has become an extremely chaotic theater of war. On the other hand, Russia continues to back the Assad regime and intends to supply it with a modern anti-aircraft system capable of shooting down even American aircraft. Iran has been sending a constant stream of supplies to Assad, and thousands of Hezbollah fighters have crossed over the border from Lebanon to reinforce his troops on the ground.

Meanwhile, even though the West has largely left the rebels in the lurch when it comes to military support, more and more Sunni Islamists, including groups affiliated with al-Qaida and perhaps a thousand Chechen jihadists have been fighting on the rebels' side. When it comes to states, Saudi Arabia and Qatar have provided the insurgents with the most support.

So far, the conflict has already claimed an estimated 93,000 lives. But, in this boiling pot of political and sectarian strife, that might be only the beginning.

The driver drops the al-Qaida fighter off in a small village on the other side of the highway. Three jihadists with thick turbans are sitting on a children's swing set reading pocket editions of the Koran. From the village, one can make out in the distance the Menagh helicopter field, the most northerly military base held by Assad's soldiers outside Aleppo.

The base's main feature is a concrete water tower. In the pillar supporting the tower, government soldiers have chiseled out slits that allow to them to fire on the rebels in the plain from above. But the rebels are pushing their trenches and tunnels toward the base so they can destroy the tanks on the airport's grounds. One of the goals of the government's new "North Storm" offensive is to relieve the soldiers besieged there.

Among those fighting on the rebel side here are jihadists from Chechnya, who have more combat experience than their Syrian counterparts. The former have been suffering heavy losses, as can be seen in the surrounding cemeteries. The Chechens belong to the "Army of Emigrants and Helpers" under the command of a man named Abu Omar al-Shishani, with the last word meaning "Chechen."

A group of some 30 Chechens are preparing themselves while hidden behind a destroyed house. They are inching their way through the trenches and toward the base while Assad's tanks fire one shell after the other.

The shots hiss over the Chechens' heads and explode in the distance. "Look," says Abu Sair, a fighter from the area. "The Chechens have even captured a Russian T-72 tank. They use it to fire on the water tower." The T-72 is sitting behind a pair of cypresses. Flying above them is the black flag of al-Qaida.

Less than 15 kilometers (9 miles) to the south, rebels are firing rockets on the Shiite enclave of Nubbol. A German jihadist with blue eyes and speaking completely accent-free High German is standing behind a rebel wall made of sandbags and observing the rockets' impacts through binoculars. Clad in black gear, he is in his mid-20s at most. A self-confessed convert to Islam, he prefers not to say where he is from.

Another 15 kilometers further south along the highway, the front runs past the shells of two half-finished houses near the village of Ma'arrat al-Artiq, one of the suburbs of Aleppo blocking the advance of government forces. Lying everywhere are home-made bombs and the command wires leading to them. Should Assad's troops capture the buildings, the insurgent plan is to blow them up.

Meanwhile, a machine gun on the opposing side is firing a constant stream of rounds in this direction. "The Hezbollah fighters are sitting up there in the houses," says rebel Abu Aiman, referring to buildings less than 200 meters (650 feet) away.

Empty boxes, with labels such as "Pasta with garden vegetables" or "Islamic Food and Nutrition Council of America," are strewn between the rebels' improvised bombs. "That is what Obama sends us as aid against Hezbollah," Aiman says scornfully. "As if we need food! We need anti-tank and -aircraft weapons -- and ammunition, lots of ammunition."

Such things might soon be arriving. Sources within the US administration told the New York Times how America might provide the rebels with assistance, saying that the CIA, rather than the military, would get weapons to Syria.

Although these might include anti-tank weapons, the United States probably won't send anti-aircraft missiles, especially given the worries that they might prove dangerous to America itself should they ever fall into terrorist hands. FSA commanders cautiously commented on Washington's announcement about supplying weapons. Gen. Salim Idriss, who is nominally the main rebel military commander as chief of the FSA's Supreme Military Council, welcomed the announcement but said that "we are waiting on actions, not words," adding that aid had already been promised too often.

Hassan Aboud, the leader of an Islamist group cooperating with the FSA, painted an even bleaker picture. "It is too late," he said. "We are now relying on aid from Saudi Arabia and on our own strength. We don't believe the United States anymore."

All elements of the opposition are united by the suspicion that the promised military assistance might only be a ruse. In their eyes, the pledge is meant to put pressure on Moscow in the run-up to the international peace conference postponed until July in the hope that it will prompt Russian President Vladimir Putin to abandon Assad.

The conference, co-initiated by Washington and Moscow, is supposed to take place in Geneva. In the best-case scenario, representatives of the Assad regime and the rebels could negotiate over a cease-fire there. This makes it crucial for each side to get the best position before going into the talks: Whoever has the upper hand militarily can make the most demands.

This situation is corroborated by a secret report submitted last week to Germany's foreign intelligence agency, the BND. The report says that Saudi Arabia allegedly intends to outfit the rebels with so-called "man-portable air-defense systems" (MANPADS), which are shoulder-fired surface-to-air missiles, such as the French "Mistral" weapon. Similar weapons already helped the mujahedeen triumph against Soviet forces during the war in Afghanistan in the 1980s.

'If We Are Patient'

Likewise, some rebel troops have already been able to get their hands on at least a few anti-tank missiles -- with or without Western assistance. For example, the FSA's "Unity Brigade" received a shipment of these weapons last week in Ma'arrat al-Artiq. Lying in the corner of a mined skeleton of a building is an empty missile casing bearing the label "9M133-1." This identifies the missile as a Kornet, a relatively modern laser-guided anti-tank missile manufactured in Russia that has a range of 5.5 kilometers. "We destroyed a tank with that yesterday," says the rebel Abu Aiman. He and his comrades proudly show mobile-phone videos of exploding government tanks.

Not far away, in Maarrat al-Numaan, a prominent imam from the ranks of the opposition named Said Salam delivered the sermon last Friday 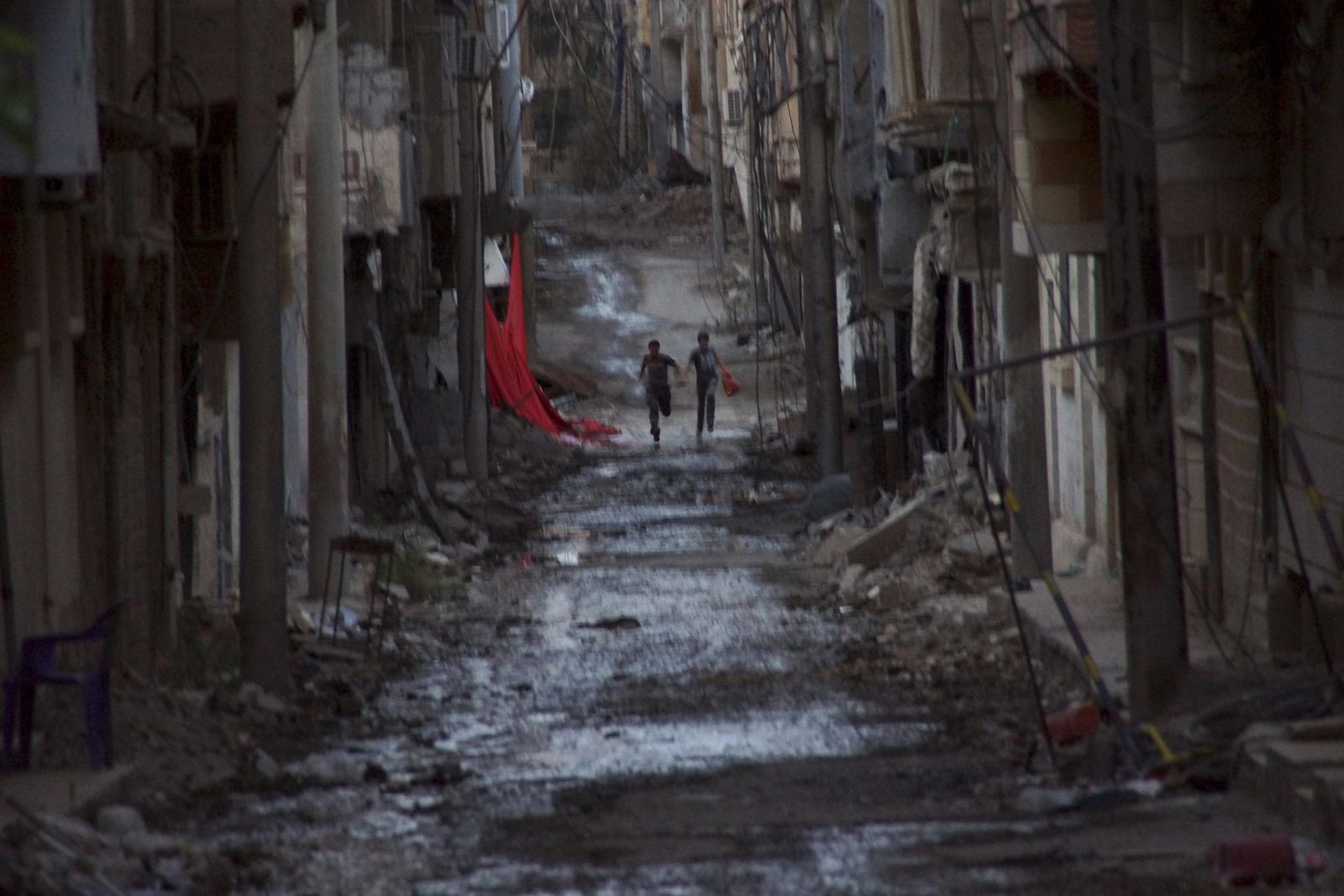 The US may soon begin delivering weapons to the Syrian rebels.