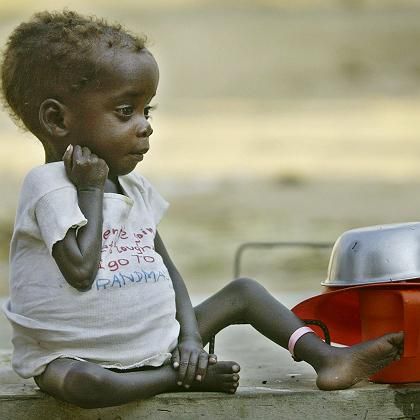 A malnourished child in Angola. The West has failed to deliver on pledges to increase aid to Africa.

Back in 2005 the G8 group of world economic leaders met in Gleneagles, Scotland and agreed to write off $40 billion of poor nations' debts. They also pledged to double development aid to Africa by 2010. Two years later, only 10 percent of those pledges have been fulfilled, according to the Africa Progress Panel (APP), set up to monitor the progress on the G8 targets.

On Tuesday, the current chair of the APP, former UN secretary-general Kofi Annan, was in Berlin to met with the German Chancellor Angela Merkel and the British Prime Minister Tony Blair. Tops on the agenda was the issue of aid to Africa and the need to ramp up the pressure on wealthy nations to fulfill their promises.

"Unless we step up our efforts  we will not make the targets," Annan warned.

After the meeting Merkel said she also wanted to ensure that these targets were met: "We are going to take things up where Gleneagles ended," she said. "We dont need to have more conferences and set more goals." Merkel has placed Africa high on the agenda for the German-hosted G8 summit in June.

Blair insisted that there had been progress since the Gleneagles summit, which Britain hosted. "But there's a tremendous amount that has yet to be done," he said. "We also know that there are still far too many Africans who die when their death is preventable with our help."

Blair also warned that it was in the interests of rich countries to act now to solve Africa's problems, or else they would themselves suffer due to "poverty, conflict, mass migration and the spread of terrorism."

The musician Bob Geldof, who is also a member of the APP, warned before Tuesday's meeting: "Economic justice is the most sacred promise you can make, because if you break it you kill people." And he urged Berlin to use its G8 leadership to make make an "historic breakthrough for Germany and the rest of the world."