Do we now know everything there is to know about the Iraq war?

Do such attempts to make the war easier to comprehend, with seemingly endless numbers of incident reports and figures, offer us any new insights?

Is it even worthwhile to add another 391,832 documents from the years 2004 to 2009 to the existing flood of books, reports and other documentation?

Two institutions that are archenemies appear to think that the answer is yes.

In one respect, the US Armed Forces, which compiled these documents, and the website WikiLeaks, which is now publishing them, share a common interest. Both organizations view the documents as an inside look at the Iraq war -- the most precise, detailed and comprehensive proximity to the bloody truth yet.

What is new about these documents is that they are written from the perspective of the Americans themselves. It is the US soldiers themselves who depict the drama of the war, dramatic events that occurred again and again at checkpoints, where the excessive nervousness of the soldiers led to hundreds of deadly incidents. The logs mention civilian deaths 34,000 times. It is the authors of the military reports themselves who are documenting the mass civilian deaths in Iraq -- deaths that occurred in both insurgent and US military attacks.

Another new aspect is that the US military itself has documented how disastrous Operation Iraqi Freedom actually was -- and with what brutality Iraqis who had been liberated from dictator Saddam Hussein acted against each other. This will not come as a surprise to anyone who has read the news over the past few years, but the Iraq documents don't merely depict single events -- they provide an image of reality that is comprised of a total of 391,832 parts which will serve as the basis for writing any history of the Iraq war in the future.

DER SPIEGEL, the London Guardian and the New York Times have analyzed and reviewed the documents, together with other media. As was the case with the tens of thousands of Afghanistan war logs published by WikiLeaks in July, there are no doubts about the authenticity of the documents. They are first-hand reports that also reflect the confusion of the moment and the notorious "fog of war."

US Government Demands Deletion of Documents

Since the publication of the Afghanistan war logs, a heated debate has raged over the question of whether the publication of such material is permissible. Among other reasons, critics argue that the material jeopardizes the lives of soldiers because it describes their routines during operations and makes them easier targets for their enemies. And nearly 50,000 American GIs are still stationed in Iraq. But it is also a question of the lives of informants, upon whose statements many of the reports are based and who are quoted within them -- and from normal Iraqi citizens whose names appear in the documents.

The allegation that WikiLeaks is acting irresponsibly has been one of the main points of contention from the US government. "Innocents will die" because of the leaks, former CIA Director Michael Hayden wrote, referring to the previously published Afghanistan documents. Admiral Mike Mullen, the chairman of the US Joint Chiefs of Staff, even accused WikiLeaks founder Julian Assange of having the blood of young Afghan families on his hands.

US Secretary of Defense Robert Gates has since put those accusations into perspective. "The review to date has not revealed any sensitive intelligence sources and methods compromised by this disclosure," he wrote in a letter to Senator Carl Levin, the chairman of the Senate Armed Services Committee. Still, he wrote that he took seriously threats by the Taliban that Afghans found cooperating with the United States would be punished. The letter, dated August 16, has only just been made public.

'Inducing Individuals to Break the Law'

The tone now being used in relation to the publication of the Iraq war logs is slightly different. "We deplore WikiLeaks for inducing individuals to break the law, leak classified documents," Pentagon press secretary Geoff Morrell told SPIEGEL (see the box below, "US Reaction to Iraq War Logs," for the full statement), "and then cavalierly share that secret information with the world, including our enemies." WikiLeaks, the Pentagon argued, continues to put at risk the lives of troops, their coalition partners and Iraqis. "We know that terrorist organizations have been mining the leaked Afghan documents for information to use against us and this Iraq leak is more than four times as large." As was the case with Afghanistan, the government is calling on WikiLeaks to "return the stolen material" and "expunge it from their websites as soon as possible."

US Reaction to Iraq War Logs

Click on the headlines to read the responses to SPIEGEL provided by Pentagon Press Secretary Geoff Morrell ...

"We deplore WikiLeaks for inducing individuals to break the law, leak classified documents and then cavalierly share that secret information with the world, including our enemies. We know terrorist organizations have been mining the leaked Afghan documents for information to use against us and this Iraq leak is more than four times as large. By disclosing such sensitive information, WikiLeaks continues to put at risk the lives of our troops, their coalition partners and those Iraqis and Afghans working with us. The only responsible course of action for WikiLeaks at this point is to return the stolen material and expunge it from their websites as soon as possible."

"We strongly condemn the unauthorized disclosure of classified information and will not comment on these leaked documents other than to note that 'significant activities' reports are initial, raw observations by tactical units. They are essentially snapshots of events, both tragic and mundane, and do not tell the whole story. That said, the period covered by these reports has been well-chronicled in news stories, books and films and the release of these field reports does not bring new understanding to Iraq's past."

"However, it does expose secret information that could make our troops even more vulnerable to attack in the future. Just as with the leaked Afghan documents, we know our enemies will mine this information looking for insights into how we operate, cultivate sources, and react in combat situations, even the capability of our equipment. This security breach could very well get our troops and those they are fighting with killed."

The US government has not commented on the content of the reports, with the Pentagon spokesman saying only that the "'significant activities' reports are initial, raw observations by tactical units." The snapshots of events are "both tragic and mundane." But Morrell says they do not tell the whole story or bring new understanding to Iraq's past, because much of the period covered by the reports has already been well chronicled in news stories, books and films.

Still, the new revelations will likely fuel a heated discussion in the United States over WikiLeaks. The American right wants revenge for what it sees as high treason. Writing in the Washington Post, columnist Marc Thiessen, a member of the conservative American Enterprise Institute think tank, characterized WikiLeaks as a "criminal enterprise" whose goal is to obtain secret information on questions of national security and disseminate it as broadly as possible. Thiessen also argued that Assange should be arrested and convicted for his alleged crimes, and that if the countries where the Australian spends his time refused to extradite him, the FBI or the CIA should take matters into their own hands and simply arrest him.

The US government asked allied nations that also have soldiers stationed in Afghanistan to prepare indictments against Assange, who still feels safe outside the United States and was practically treated as a pop star in Sweden, at least until two Swedish women accused him of sexual harassment and rape.

The investigations into the case have had some impact, even if Assange rejects all the accusations. Recently, Swedish immigration officials rejected Assange's application for a residence and work permit. This means he cannot register as the publisher of WikiLeaks there, as he had intended to do in order to profit from the strength of Swedish data protection laws.

In the past week, the Pentagon has asked the media not to cooperate with WikiLeaks and not to publish the Iraq material. To a government this might seem a reasonable request, but for the media, which feels a duty to report objectively and serve as a check on the power of governments, this can not be our guiding principle. The documents represent an indispensable source necessary for an independent assessment of the war.

At the same time, the uncritical publication of the documents without vetting their contents would be irresponsible. As was the case with the Afghanistan material, SPIEGEL has done everything possible with the Iraq documents to ensure that lives are not put at risk. The names of informants or US forces and allies and places that could be targeted for collective reprisals after publication have been removed or effaced.

As is so often the case with raw texts from original sources, the documents have the advantage of authenticity, but the disadvantage of being incomplete. Key events in the Iraq war do not appear in the reports and the political background and context is lacking.

There is nothing to be found in the reports about the storming of the Sunni bastion of Fallujah, or about the killing of civilians in Haditha, or the years-long hunt for the head of al-Qaida in Iraq, Abu Musab al-Zarqawi, who has since been killed. This may be because the documents being released are only classified up to and including the level of "secret." The war logs do not, however, include reports classified as "top secret."

Nor does the material contain any substantial information about the Abu Ghraib scandal. Reports of prisoner abuse by US soldiers first appear in the reports one year after Abu Ghraib, and they indicate that, in those cases, the culprits were punished under military regulations.

Nevertheless, the Iraq material, like the Afghanistan documents, does provide a first-hand view of the war, which makes it journalistic material in the best sense of the word.

It has the potential to change the way people view this war.

Editor's Note: The next issue of DER SPIEGEL is currently in production and the magazine's main feature article on the WikiLeaks Iraq war logs will be published on SPIEGEL ONLINE International in English on Monday. 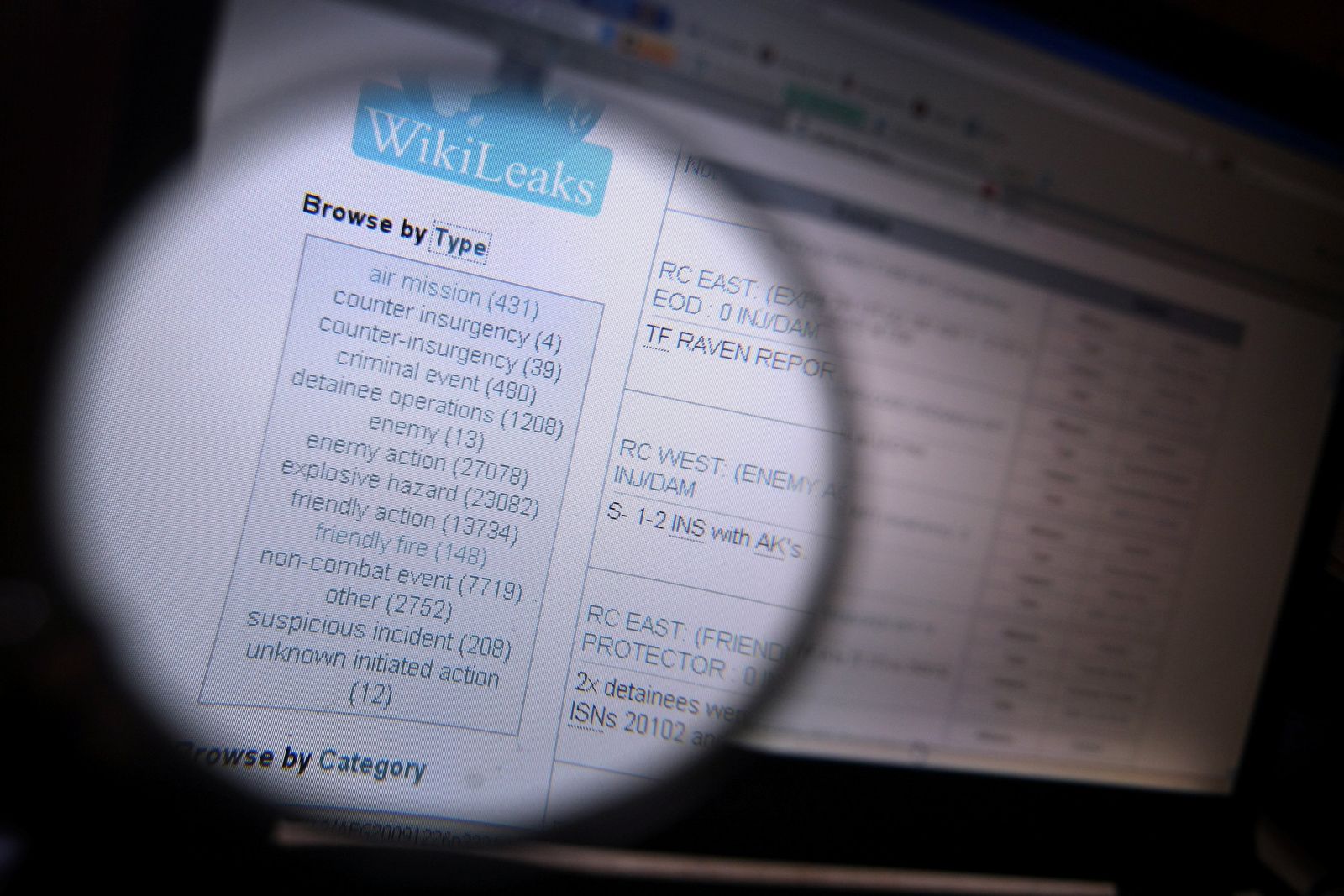 Is it right or wrong to publish documents obtained by WikiLeaks?