First there were hundreds of thousands of documents from the Afghanistan conflict, and now there are hundreds of thousands from the Iraq war. WikiLeaks intends to publish a massive collection of internal war logs from the United States military early Saturday morning. They include some 391,832 field reports from US soldiers from a Pentagon database. Taken together, they represent a kind of diary of the Iraq war between 2004 and 2009.

DER SPIEGEL, the London Guardian and the New York Times have analyzed and reviewed the documents together with other media sources. As was the case with the around 77,000 Afghanistan war logs published by WikiLeaks in July, SPIEGEL has taken every measure possible to ensure that lives are not put at risk. This includes redacting the names of those individuals who could be targeted for revenge or of those places at risk of being targeted for collective reprisals. The danger publication of the reports could create for informants and soldiers in Iraq is the primary concern of the US government, which is currently seeking to take action against WikiLeaks.

"We deplore WikiLeaks for inducing individuals to break the law, leak classified documents," the Pentagon Press Secretary Geoff Morrell told SPIEGEL (see the box below, "US Reaction to Iraq War Logs," for the full statement), "and then cavalierly share that secret information with the world, including our enemies."

US Reaction to Iraq War Logs

Click on the headlines to read the responses to SPIEGEL provided by Pentagon Press Secretary Geoff Morrell ...

"We deplore WikiLeaks for inducing individuals to break the law, leak classified documents and then cavalierly share that secret information with the world, including our enemies. We know terrorist organizations have been mining the leaked Afghan documents for information to use against us and this Iraq leak is more than four times as large. By disclosing such sensitive information, WikiLeaks continues to put at risk the lives of our troops, their coalition partners and those Iraqis and Afghans working with us. The only responsible course of action for WikiLeaks at this point is to return the stolen material and expunge it from their websites as soon as possible."

"We strongly condemn the unauthorized disclosure of classified information and will not comment on these leaked documents other than to note that 'significant activities' reports are initial, raw observations by tactical units. They are essentially snapshots of events, both tragic and mundane, and do not tell the whole story. That said, the period covered by these reports has been well-chronicled in news stories, books and films and the release of these field reports does not bring new understanding to Iraq's past."

"However, it does expose secret information that could make our troops even more vulnerable to attack in the future. Just as with the leaked Afghan documents, we know our enemies will mine this information looking for insights into how we operate, cultivate sources, and react in combat situations, even the capability of our equipment. This security breach could very well get our troops and those they are fighting with killed."

WikiLeaks, the Pentagon argued, continues to put at risk the lives of troops, their coalition partners and Iraqis. In addition, Morrell added, the reports are "initial, raw observations by tactical units. They are essentially snapshots of events, both tragic and mundane, and do not tell the whole story." Besides, the Pentagon added, the period covered in the reports has already been well-chronicled in news stories, books and films.

A War that Lasted Longer than WWII

SPIEGEL nevertheless decided to publish the documents because they expose additional dimensions to the war. The brief, matter-of-fact incident reports offer an unusual perspective on a war that lasted longer than World War II.

They show the everyday aspects of the campaign as US soldiers experienced it. The thousands of threat analyses, attack reports and arrest records allow a very precise reconstruction of the escalation of the sectarian battle between the Shiites and Sunnis, how it brutalized Iraqi society and how kidnappings, executions and the torture of prisoners became routine practices. The reports also provide some evidence that neighboring countries including Syria and Iran were involved in the war. SPIEGEL ONLINE will be running a series of stories in the coming days shedding additional light on aspects of the war, and readers can also browse the complete WikiLeaks database in an interactive Iraq map prepared by SPIEGEL ONLINE. On Monday, SPIEGEL ONLINE will publish this week's WikiLeaks Iraq cover story in English. 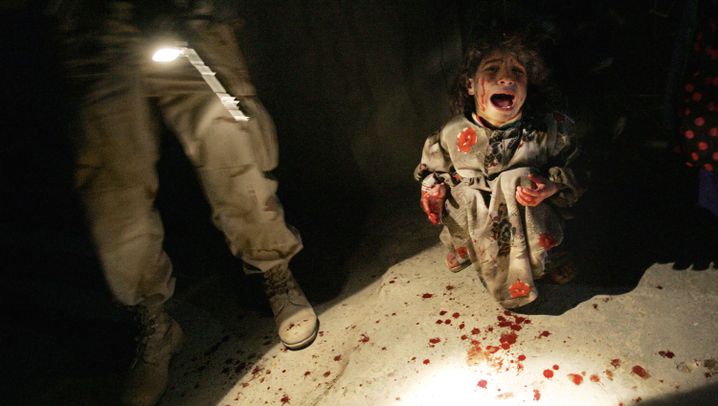 The documents included in the WikiLeaks database aren't of the highest level of classification -- at most, they are "secret," but not "top secret." As such, many of the most sensational events in the Iraq war don't make an appearance, including the torture scandal at Abu Ghraib. There are other weaknesses, as well -- they are one-sided and subjective, unverifiable and, in many cases, were produced on the battlefield, making it easier for errors to slip through.

However, they have the cumulative effect of painting a precise picture of an asymmetrical war, one in which a superpower equipped with state-of-the-art weaponry often stands helpless on the battlefield against individual fighting units, as brutal as they are nimble. The material shows how the constant state of fear paralyzed the world's last remaining superpower. Is the next bomb about to go off? Is it around the corner? On the side of the road? Or strapped to the body of an insurgent?

The war logs begin on Jan. 1, 2004, a day on which seven explosions were reported between Kirkuk in northern Iraq and Basra in the south, and end on Dec. 31, 2009, when three attacks were reported. With terms like "bomb explosion," "under enemy fire" and "discoveries of weapons," the Iraq logs try to make the war fit into the rough grid of military terminology. But there is one key difference between the Afghanistan war logs and these: The Iraq reports are all from a war that had already been officially declared as having been won. George W. Bush, the US president and commander in chief at the time, declared on May 1, 2003 on the aircraft carrier USS Abraham Lincoln that "major combat operations in Iraq have ended." The field reports show that his statement proved to be untrue for years to come.

The soldiers' reports sometimes have a very reserved tone -- for example, when it comes to the deployments of their fellow soldiers who are hunting suspected insurgents, when patrols are ambushed or when weapons caches are discovered. They are everyday scenes from a war.

And often the horrors that occurred are hidden in military abbreviations. The numbers and letters "13xAIF KIA," for example, stand for 13 enemies killed ("13 anti-Iraqi forces killed in action") -- as happened on July 12, 2007, when US attack helicopters became notorious around the world for the "Collateral Murder" operation in which they fired on innocent Iraqis. The fact that something must have gone awry in the mission is clear in the classified document because there were also "2xLN children WIA" -- "3 local national children wounded in action."

But other reports express the extent of the horror of the war more clearly. As tensions mount within the Iraqi population starting in 2004, acts of the greatest cruelty take place. In June 2005, for example, the death of six members of a family near Baqouba are documented, a typical incident at that time. The killers tied the victims' hands behind their back and then cut off their heads, laying them next to their corpses on the ground. The nine-year-old grandson was forced to die the same way as his grandfather. At another point, US soldiers report that a commander with the Shiite Mahdi militia killed his wife. She evidently saw him commit an "extra-legal killing" -- a murder -- and she filmed him doing it on a mobile phone.

The documents show hundreds of thousands of times what can happen to a society at war -- how it gradually slips to the point of self-destruction and the verge of breakdown. During those years, a full-blown civil war between ethnic groups in Iraq was only barely prevented.

Recently, Bush's successor, Barack Obama, also officially declared the end of combat operations. On September 1, Operation Iraqi Freedom was replaced by Operation New Dawn. But aside from the excessively optimistic terminology, there were no signs of triumph to be seen. There were no flag-bedecked aircraft carriers or returning veterans being cheered as they marched up Broadway in New York.

President Obama, long an opponent of what he once called a "dumb war," pointed out that the war had not only cost many lives, but had also come at a high financial cost. "We spent a trillion dollars at war, often financed by borrowing from overseas," he said. At the very same place where his predecessor had announced the start of the war, Obama declared its end in a tone suggesting that a completely different, considerably more humble nation had emerged from the conflict.

According to official figures, 3,884 US soldiers died between 2004 and 2009, an additional 224 soldiers from allied nations, well over 8,000 members of the Iraqi security forces (reasonably reliable figures are missing for 2004) and 92,003 Iraqi civilians whose deaths are documented by at least one source. Together, this makes more than 104,111 deaths, a figure that approximates the number of victims reported dead in these documents, namely 109,032. And although this war wasn't nearly as devastating in terms of the sheer number of casualties as the Vietnam War, with its 3 million deaths, its effects on the standing of the United States in the world have been no less devastating.

One month before the beginning of the invasion, Bush had blustered that the overthrow of dictator Saddam Hussein and "a new regime in Iraq would serve as a dramatic and inspiring example of freedom for other nations in the region." But the military that withdrew after seven years of war was a demoralized force that had long since ceased to believe in the noble goals of the campaign.

The documents faithfully reflect this change. In the roughly 400,000 documents, the word "democracy" appears only eight times. The "improvised explosive devices" which instilled fear in the hearts of American soldiers, however, are mentioned 146,895 times.

Editor's Note: The next issue of DER SPIEGEL is currently in production and the magazine's main feature article on the WikiLeaks Iraq war logs will be published on SPIEGEL ONLINE International in English on Monday.