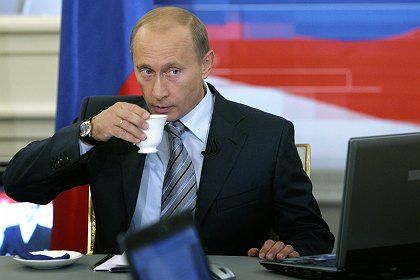 President Vladimir Putin as he listens to a question during a call-in show on Russian TV. He announced "grandiose" plans for Russia's military during the show.

Average citizens would be forgiven this week for thinking they'd slipped back in time. After off-the-cuff remarks by the American president and his counterpart in Moscow, things felt uncomfortably -- cold. During a press conference, US President George W. Bush answered a question about Russian President Vladimir Putin's friendly state visit to Iran. "I've told people," he said -- and by people he probably meant Putin -- "that if you're interested in avoiding World War III, it seems like you ought to be interested in preventing [Iran] from having the knowledge necessary to make a nuclear weapon."

Then Russia's military test-fired an intercontinental ballistic missile from a base in northern Russia, reportedly into the Pacific. On a Russian TV show announcing the test, Putin told viewers about "grandiose" plans to restore Russian military might and "develop missile technology, including completely new strategic (nuclear) complexes, completely new."

Hang on -- a nuclear arms buildup? Ballistic missile tests? Rhetoric from Washington about World War III? What year is this, again? Bush tried to reassure reporters at his press conference that relations with Russia hadn't slipped back to the twentieth century. "We don't agree on a lot of issues; we do agree on some," he said. "Iran is one; nuclear proliferation is another. Reducing our nuclear warheads was an issue that we agreed on early." But the mood in Moscow has apparently changed, and German papers on Friday are responding to this feeling of déjà vu with guarded pessimism.

"George W. Bush has been talking about war for six years without rest. To secure peace, he started two wars; in the case of Iran he keeps threatening to attack. In the meantime Putin's Russia has started to erupt with military threats, sending long-distance bombers around the world and announcing new armament projects almost by the week -- and international rhetoric as well as behavior patterns from the Cold War have enjoyed a comeback."

"The mention of a Third World War, which Bush used this week to threaten Iran, Russia and the world, also came up a year ago in a speech by Osama bin Laden. 'The war will end in glory and triumph, or in misery and humiliation.' Back then Bin Laden saw Iraq as the crystallized heart of a world war; now Bush sees the same thing in Iran. The difference isn't huge, and the logic of simple contrasts used by both men is the same."

"Vladimir Putin can be satisfied. He talks about 'grandiose plans' for new weapons -- and the world listens. The Russian president has thereby achieved one of his goals. Threats from Russia are taken seriously again. The nation's military forces may still be ramshackle, and Putin's latest announcements may not be concrete or even new. But now there's a climate of confrontation between Russia and the West, which allows even hollow threats to sound threatening."

"Putin's remarks, in any case, weren't in this instance aimed at the West, but at the Russian public  (And) it appeals to a majority of Russians that the world respects them again, even if respect come in the form of fear. The climate of confrontation therefore has a domestic political goal."

"The list of disagreements is long, ranging from the planned American missile defense system in Europe to the still-undetermined status of Kosovo. The Russians are right to feel that the West undervalues their geopolitical importance. Changing that is Putin's mission."

"But the US-Russia relationship isn't as frosty as the recent exchange of words would lead one to believe. Take the issue of Iran's nuclear program, the most important issue in international politics today -- the two sides have more in common than one might think at first glance."

"Putin's embrace of the Iranian president and his salvos against US policy in Iraq should be understood the way they're meant: as diplomatic provocations, not as declarations of war."

"As long as the Russian-American arms race is limited to rhetoric, it presents no direct threat to world peace. That separates today's situation from the Cold War: Harsh words are easier to defuse than SS-20 missiles and Pershing rockets."