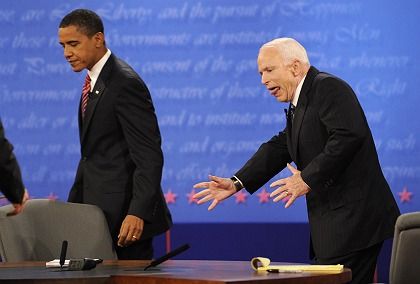 Republican candidate John McCain at the recent debate with Barack Obama: "It was McCain's now-or-never moment."

Nothing was left to chance at Wednesday evening's showdown. A stream of air-conditioning was even positioned above each candidate, to prevent them from appearing hot and bothered on screens worldwide. And with polls ahead of the debate showing John McCain trailing his Democratic rival, the big question was whether the Republican candidate could bounce back and woo those still undecided.

It was down to veteran CBS News anchor Bob Schieffer to supervise the 90 minutes of crossfire. Having posed a question, he would take a back seat, letting the two candidates clash face to face. True to character, the Arizona Senator McCain came across as the more aggressive of the two, seizing the chance to repeat some of his recent attacks on his Democratic counterpart.

But despite his bid to stain Obama's reputation, a CNN flash poll taken after the debate found that only 31 per cent of people thought he won. German commentators on Friday published their impressions of the contest -- and what it could mean for the big day.

"In the end, with this debate McCain -- in the absence of unforeseeable events -- has gambled away his best and perhaps last chance to halt Obama's climb. He fought back bravely -- and better than ever. But, the sum total was still not enough. All the subsequent flash polls crowned Obama as the debate's winner. Normally, such values are of fleeting importance. This time, however, they are decisive. The third debate in Hampstead on Long Island was considered the 'point of no return,' as even one of McCain's people in the press center said, though admittedly off the record."

"It was McCain's now-or-never moment: 19 days ahead of the election, he needed to take the helm."

"McCain has also lost the last television debate against Barack Obama. The Republican US presidential candidate didn't succumb to the Democrats because he had worse arguments regarding the economy. ... In recent weeks Obama simply managed to evoke more confidence among the voters -- and confidence is tantamount to hard currency in times of crisis."

"It is curious that Obama may win the presidency on the basis of the economy of all things. After all, in his speeches across America the Democrat seems to be speaking to a country which no longer exists. ... Obama's program is a program of moderate wealth redistribution. A program with a feel-good factor. A program for an America which is not in the throes of a financial crisis."

"After the election a possible President Obama would have to react to the real America: a country with an enormous debt burden plus a costly bank rescue plan. A country in which there is not a lot left to redistribute."

"McCain has left a better impression than in the two previous debates with Obama. Three weeks before the general election, that's not bad news for the Republican senator. Still, new polls show Obama with a 7 to 14 point advantage, and the debate doesn't appear to have changed that. Nevertheless, as good as the trend seems to be for the first-ever black nominee, it would be premature to write off McCain. There are good reasons to believe that the dirty campaign that the McCain/Palin team has conducted in the last 10 days, may still pay off on election day. The slogan 'Barack Obama - too risky for America,' vice-candidate Sarah Palin's effort to link Obama with terrorists and her remarks that he doesn't see the country like 'you and me' -- that is all openly racist, as racist as the 2008 election campaign can become."

"When McCain is confronted about such moments he gives a wide-eyed impression of the shocked innocent. But this trend of over-stepping the mark is naturally planned -- and in keeping with an approach that McCain evidently perceives as his last chance: that voters still, perhaps in the anonymity of the voting cabin, will succumb to their fears about voting for an African-American candidate."

"The last of the three debates hasn't changed anything in the basic dynamic of the presidential election. John McCain, the Republican, will not be able to make up his shortfall, not even with a dirty campaign ..."

"In times of economic crisis, voters tend to back Democrats rather than Republicans. Americans, especially the swing voters in the middle, have seen their doubts about Obama vanish. The unknown man with the foreign-sounding name no longer triggers fear. Meanwhile, doubts about McCain, the supposedly well-known veteran, are on the rise ..."

"McCain's helpers have caused chaos. The have piled McCain with message after message. First McCain called his competitor Obama 'inexperienced,' then 'unreliable.' Now he is being billed as a safety risk because he was once acquainted with a former terrorist. The impression this gives is that McCain is an old grumbler, he doesn't know what he wants or where he's going. In times of crisis though, voters want reliability."

"In the recent weeks' financial mayhem, Obama kept his cool in contrast to a jittery McCain. That impresses Americans. They would rather trust Obama to solve the problems of their country. Something astonishing will have to happen for Obama to fritter away this confidence before the election."