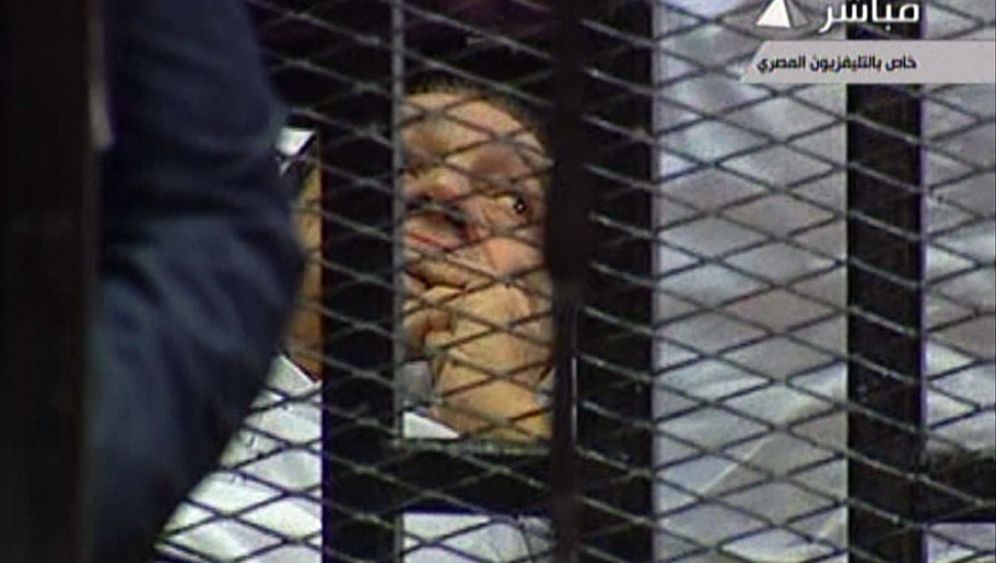 Hosni Mubarak's trial in Cairo started Wednesday in dramatic fashion, with the ailing dictator pleading innocence in court from a hospital bed, parked in a steel cage next to his two sons. The Mubaraks and several other former government figures are charged with corruption and with ordering lethal violence during the winter protests in Cairo's Tahrir Square. Any of them could face the death penalty if convicted. From his bed, though, Mubarak told the tribunal, "I deny all these accusations completely."

The transitional military government has allowed live coverage of the trial on national TV, and it has Egyptians riveted. Mubarak's thirty-year dictatorship has left a bad aftertaste, and the violent crackdown on protests in January and February left at least 850 people dead.

"I am delighted that I see them in a cage," said Saeeda Hassan Abdul Raouf, the mother of one protester killed in the uprising, told the Associated Press in Cairo. "I feel that my son's soul is finally starting to be at rest and that his blood will cool."

Not everyone agrees. Some Egyptians feel Mubarak doesn't deserve such indignity. He was a dictator, but without being as cruel as Iraq's Saddam Hussein, they argue. Yet the trial is unprecedented, as the BBC's John Simpson pointed out Wednesday in a report from the courtroom in the Cairo Police Academy. "For the first time ever," he said, "an Arab country has, of its own volition -- not after a foreign invasion as in Iraq -- put its former ruler on trial."

German commentators weigh in on Thursday.

"The trial [of Mubarak] is indeed a leap forward for Arab nations, but for Egypt's revolution it is only one small step among many. Even if Mubarak's judge proceeds with a fair trial, the path to democracy is long. The army is still in charge. Civilians are being judged by military courts, and thousands have been arrested on political grounds. No one knows how fair and democratic the elections will be this fall. But one can consider the fact that in France it took a good 80 years after the storming of the Bastille before the monarchy evolved into a democracy. It would be naïve to think that in Cairo a similar process could take only six months."

"The trial is stirring the country up. Hosni Mubarak is no Saddam Hussein, say some. They are right. Others mourning their children or siblings are calling for a punishment like one any nameless murderer would receive. But in the first hours of the trial in the Cairo Police Academy the Egyptian people were convinced that justice is being taken seriously. The least of them truly want to see Mubarak hang in the end. The rest would be satisfied with a verdict that imprisoned him for life. And that would be writing on the wall enough for other despots in the region."

"Egypt is a leading power among Arab states; it's not a tribal assemblage like Libya, or a colonial relic like Tunisia, or a socio-religious repression machine like Syria, but a state founded on old tradition. If yesterday's dictator can be tried in Egypt, it's not just a morale-booster for the revolutionary masses but a warning to those still in power of what might yet be in store. No one can expect mildness or mercy."

"(But) what Egypt needs is not revenge and recompense, but reconciliation, and an opening to the rest of the world. Without the trust of its extended neighborhood -- including, namely, Europe and the United States -- there will be no investment, and no development help."

"Instead of letting the old man die in peace, the military is playing a loathsome and dangerous game with public rage … Do those now in power in Egypt understand that revolutions tend to eat their young? That Mubarak was once a guardian of peace with Israel, but is no longer, should at least be a warning to the West."

"The Egyptian revolution continues: That is the message sent by the trial against former President Mubarak that just began in Cairo."

"In the coming weeks and months, the Cairo Police Academy building won't just be a place of clarification, but also a testing ground for the new rule of law. Because the proceedings will be broadcast live, the entire Egyptian population can follow the trial and form their own opinions. This isn't just important for the protestors of Tahrir Square. The trial is a milestone for the entire Arab world."