The arrest is being celebrated as an important success in the ongoing struggle against the Taliban in Afghanistan and Pakistan. On Tuesday, it emerged that Mullah Abdul Ghani Baradar, considered to be just below leader Mullah Mohammad Omar in the Taliban hierarchy, had been apprehended earlier this month. On Wednesday, Pakistani military officials confirmed the arrest.

But what is good for the US is potentially embarrassing for Pakistan. Baradar, alleged to have served as a go-between between Mullah Omar and Taliban field commanders, was picked up in the Pakistani city of Karachi. The Pakistani intelligence service ISI was involved in the operation, but it casts doubt on Pakistani claims that top Taliban leaders were all in Afghanistan. The arrest, however, could signal a new Pakistani willingness to work together with NATO forces currently fighting in Afghanistan.

Just what the arrest means for the Taliban remains to be seen. One Taliban spokesman denied the reports, saying it was nothing but propaganda. But a Taliban commander confirmed the arrest in an interview with SPIEGEL ONLINE. "Mullah Baradar travelled to Pakistan 10 days ago and five days ago we learned that he was arrested in Karachi," Mullah Wali Jan said.

German commentators on Wednesday take a closer look at the operation.

"(In arresting Baradar, Pakistan) is finally acknowledging that it has a problem with extremism. That might sound fairly banal, but it's no small step for a country like Pakistan, which usually keeps mum about such issues. Moreover, the fact that the arrest was made so far from the unstable border region with Afghanistan shows just how bad things have already gotten in Pakistan."

"However, the arrest does not prove by a long shot that Washington and Islamabad now share the same interests when it comes to Afghanistan's ultimate fate. Pakistan assumes that the Taliban will be a decisive power factor in its neighboring country once NATO withdraws its troops. The Western powers' desire to bring their troops home as quickly as possible strengthens the pragmatic view in Pakistan: Islamabad wants to be prepared for the day when the Taliban numbers among the decision-makers in Kabul -- and to not cause any permanent damage to its relationship with the Taliban. In that sense, nothing has really changed."

"(Baradar's arrest) could end up providing excellent information, for example, on the extent and intensity of ties that the Taliban continues to have with elements in the Pakistani intelligence apparatus. His arrest could also indicate that Pakistan has really decided to finally put some curbs on the trouble caused by militant Islamists in both Afghanistan and Pakistan. Time will also tell whether the arrest is the opening move in a larger game involving negotiations with so-called 'moderate' Taliban. The fact that the Taliban has vehemently denied the arrest shows just how much his loss affects them -- and perhaps just how much more serious the consequences will be."

"The first question that Baradar's arrest in Pakistan raises is whether it will weaken the Taliban over the long term in its fight against the Afghan government of President Hamid Karzai and his NATO allies. In the past, the Taliban has always shown itself capable of compensating for loss -- even of key commanders -- very quickly.  As head of day-to-day operations, though, Baradar is somewhat more important that other commanders. His loss will surely have consequences on the ongoing Helmand offensive."

"The second question is whether it can harm President Karzai's push for reconciliation with the Taliban.... Up to now, Pakistani intelligence services have preferred to apprehend those Taliban leaders who were open to talks. This includes Baradar, who gave his blessing to holding talks with the United Nations in January."

"On the other hand, were Pakistan to negotiate with the Taliban via Baradar, it wouldn't be the first time a deal was struck with the imprisoned leader of one's enemies. Whatever Pakistan is considering, it now has a trump card it can use in Afghanistan talks and to exert influence on its neighbor."

"For a long time, all of the parties involved in the conflict  have been in contact with each other via secret channels. This is particularly the case with Pakistan  which is better networked than others. Indeed, Islamabad has shown just how well informed it is with the sudden 'detection' of one of the most important members of the Taliban. Some responsibility for this also lies with the Pakistani Taliban itself, whose brutal campaign of terror has driven Pakistan into a permanent crisis. Islamabad is determined to make sure that its own strategic interests will be kept in mind during the negotiations aimed at finding a solution to the problems in Afghanistan. As Baradar's arrest shows, if this precondition is met, Pakistan is willing to help. Peace is still a long way off in Afghanistan. But, when it does arrive, if India's position in the Hindu Kush becomes too strong, for example, or the Pakistanis believe that their economic interests have been given short shrift, its generals could also sabotage each and every agreement." 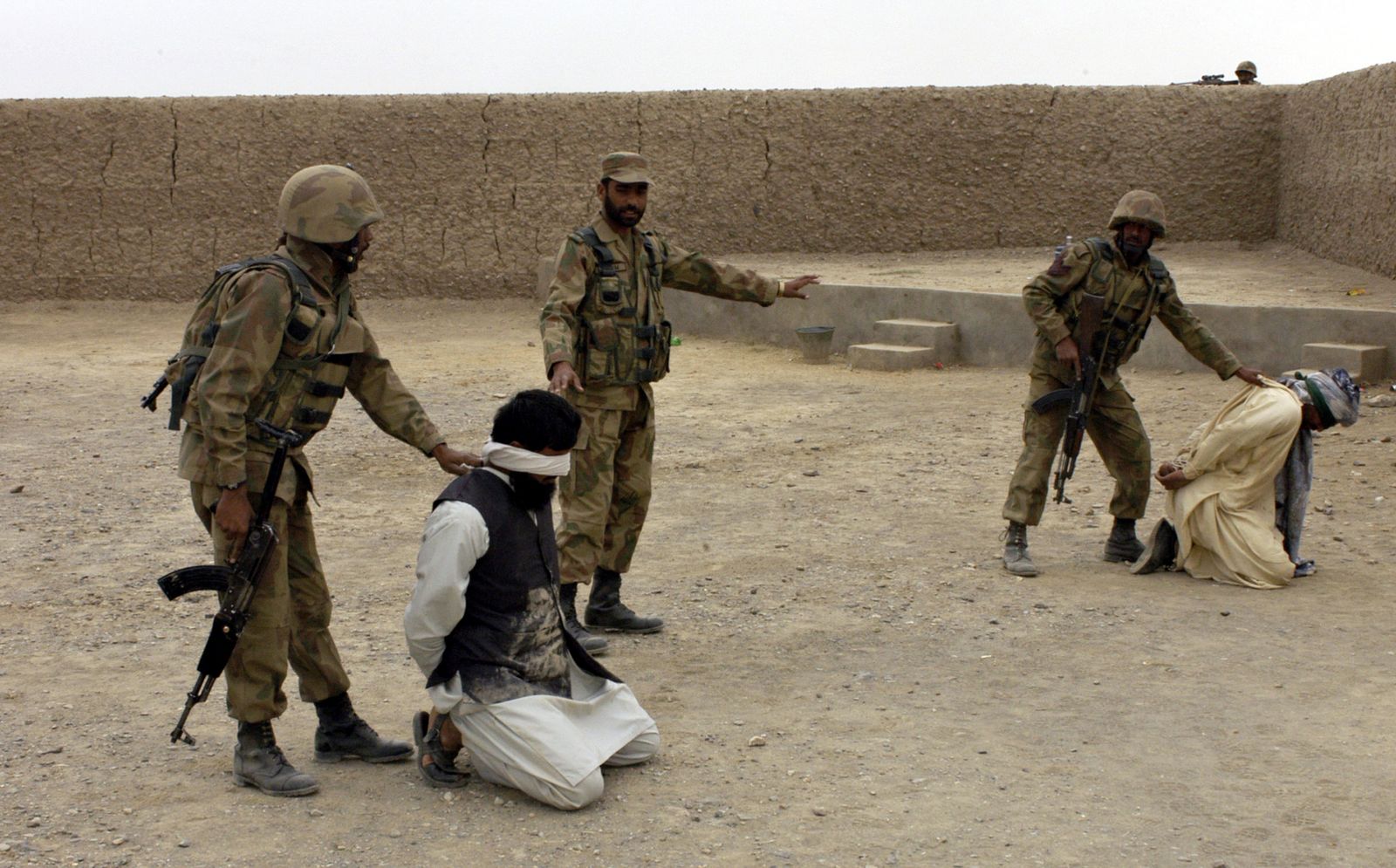 A photo released by Pakistan's intelligence services shows army troops seizing Taliban militants while on an offensive in the tribal district of South Waziristan in November.