The London arrest of WikiLeaks founder Julian Assange made headlines in all of the major German newspapers Wednesday, with several noting how welcomed the arrest was in the United States, and editorialists discussing what freedom of information means in the world's last remaining superpower.

Assange, who turned himself over to Scotland Yard authorities on Tuesday morning, was denied bail by the British judge overseeing the case. He has been accused in Sweden of one count of rape, one count of unlawful coercion and two counts of sexual molestation, involving incidents which allegedly occured in August 2010. The Swedish public prosecutor's office had issued a European warrant to bring Assange in for questioning.

The arrest came as Assange, the 39-year-old WikiLeaks founder, faced increasing pressure from all corners of the world -- Sweden, the United States, and even his home nation, Australia -- following the stream of secret US diplomatic leaks that have been published by his website and several major news organizations, including SPIEGEL.

US Secretary of Defense Robert Gates told reporters in Afghanistan Tuesday that Assange's arrest: "Sounds like good news to me." Several prominent US politicians had been calling for his arrest, and former Republican Vice Presidential candidate Sarah Palin said he should be tracked down and hunted like Osama bin Laden. Australian Prime Minister Julia Gillard has said that Assange's publication of the US diplomatic cables on his website was illegal.

In his response published Wednesday in the daily The Australian, Assange calls organization the "underdog" and writes: "Prime Minister Gillard and US Secretary of State Hillary Clinton have not had a word of criticism for the other media organizations. That is because The Guardian, The New York Times and Der Spiegel are old and large, while WikiLeaks is as yet young and small."

He also writes that the Australian government is "trying to shoot the messenger because it doesn't want the truth revealed, including information about its own diplomatic and political dealings."

Australian Foreign Minister Kevin Rudd said that Assange would get consular support in Britain, and told The Australian: "What we do with Australians in strife anywhere in the world is that we take the view that our responsibility is to ensure the consular rights and legal rights of all Australians abroad are protected. And that includes Mr. Assange."

WikiLeaks spokesman, Kristinn Hrafnsson, wrote on Twitter: "We will not be gagged, either by judicial action or corporate censorship."

The Agence France Presse agency reported Wednesday that Assange supporters hacked into the e-mail system of the Swedish public prosecutor's office in response to his arrest.

Some well-known US politicians are now casting the net wider. "To me the New York Times has committed at least an act of bad citizenship, but whether they have committed a crime, I think that bears very intensive inquiry by the Justice Department," US Senator Joe Lieberman told Fox News.

Meanwhile, the German newspapers were split on what Assange's arrest really meant -- a case of Swedish justice, or a convenient way to silence him. Some questioned how a country that long valued freedom of information could now stand against it. The damage done to the reputation of the United States just continues, they say.

"The reputation of the United States has been damaged by the WikiLeaks-controlled release of secret documents. That is true But the United States' reputation is being damaged much more right now as they attempt -- with all of their means -- to muzzle WikiLeaks and its head, Julian Assange. By doing so, the US is betraying one of its founding myths: Freedom of information. And they are doing so now, because for the first time since the end of the Cold War, they are threatened with losing worldwide control of information."

"'The first real information war has begun,' writes US civil rights activist John-Perry Barlow. 'The battlefield is WikiLeaks.' He is right. With the doctrine 'Free Flow of Information' the US has dominated the flow of information and most of its content for decades. They said that every person had the right, everywhere, and without limitations, to collect information and to broadcast and disseminate it. That was a tremendous doctrine, as long as only American companies had the power, the means, and the logisitical capabilities, to make use of this freedom. That changed somewhat with the Internet, but companies like Apple, Windows, Google, Facebook and Amazon advance US-domination in the supposedly democratic Internet. Julian Assange and WikiLeaks are the first who have used the power of the Internet against the United States. That is why they are being mercilessly pursued. That is why the government is betraying one of the principles of democracy."

"The Swedish public prosecutor's office merely wants to question the Australian Assange about the serious accusations that have been made about him. So far, Assange has balked at this explanation of the facts. His supporters sense that the fix is in, and that the rape charges have been faked to harm the WikiLeaks project."

"If that were true, both of the Swedes, who Assange doesn't deny knowing, and the Swedish prosecutor must be following a secret agenda dictated to them by the United States. Until now, there has not been a single form of proof for that, to make one take it seriously. In Sweden, it is explicitly not about the political damage that the WikiLeaks-activist has caused."

"Obviously, he assumed that the elasticity of law and order in the Internet also applies to real life. But that is where he was wrong. His arrest is proof that in real life the rule of law can have harsher consequences. Even still."

"The arrest is as potentially scandalous and it is superfluous. The operation has produced a martyr, and he has asked if it is all really about the legally offered explanation of the rape charges. Or, if instead it is more about getting a man out of the way, who, in the opinion of numerous US politicians, is Public Enemy No.1."

"And that is the case, even though no one can explain what crimes Assange allegedly committed with the publication of the secret documents, or why publication by WikiLeaks was an offense, and in the New York Times, it was not."

"The already damaged reputation of the United States will only be further tattered with Assange's new martyr status. And whether or not the openly embraced hope of the US government that along with Assange, WikiLeaks will disappear from the scene, is questionable. A platform like WikiLeaks should be able to survive without a frontman, who was just as glamorous as he was polarizing, and whose autocratic leadership style cost him important employees even months ago."

"In the so-called 'war on terror' the democracies of the US and Europe have not only instigated wars without satisfactory reasons but have also tried to reduce the privacy, civil rights and liberties of their citizens. More power for the state but less transparency for the people -- this asymmetrical conflict is self-inflicted by countries like the US and it has created a need for a platform like Wikileaks."

"The new anti-terror powers have made it difficult to bring criticism into the public domain. But now it is much easier to understand 'when who has talked to whom about what'. It doesn't matter if the threat was more imagined than real - it still gave rise to the need for a trustworthy channel. Classic media could not fill this need: It doesn't have a clear awareness of the new, general feeling of being threatened, nor the technical know-how. Wikileaks had both."

"Julian Assange is the star of Wikileaks but the need for his website is bigger than the need for him. If Wikileaks doesn't survive the current attacks then similar sites will take its place, as long as there is a need for them."

"'One man's terrorist is another man's freedom fighter': this Anglo-Saxon saying still holds true in the Internet age. To the US, Assange is a terrorist; to the Internet community, he is a pioneer of freedom. The favourable view of Assange seems to have more sympathy here in Germany -- in any case, discussions use the words 'platform for exposure' and not 'espionage.' However this perception is based on the unproven assumption that Assange was driven by pure motives -- a desire to enlighten."

"One doesn't need a conspiracy theory to have doubts. The mass production of secret documents on WikiLeaks exhibits no particular strategy apart from the exposure of powerful institutions. Assange clearly wants to destabilize the system -- or all the systems. The content as well as the sheer mass of data should ensure that. Many people's clandestine joy over this anarchic strategy of obstruction is a political signal. This is why the conflict with Assange cannot be won through political or economic means. The institutions that Wikileaks attacks must demonstrate the legitimacy of their actions. If that happens, then Assange really will have achieved something for democracy." 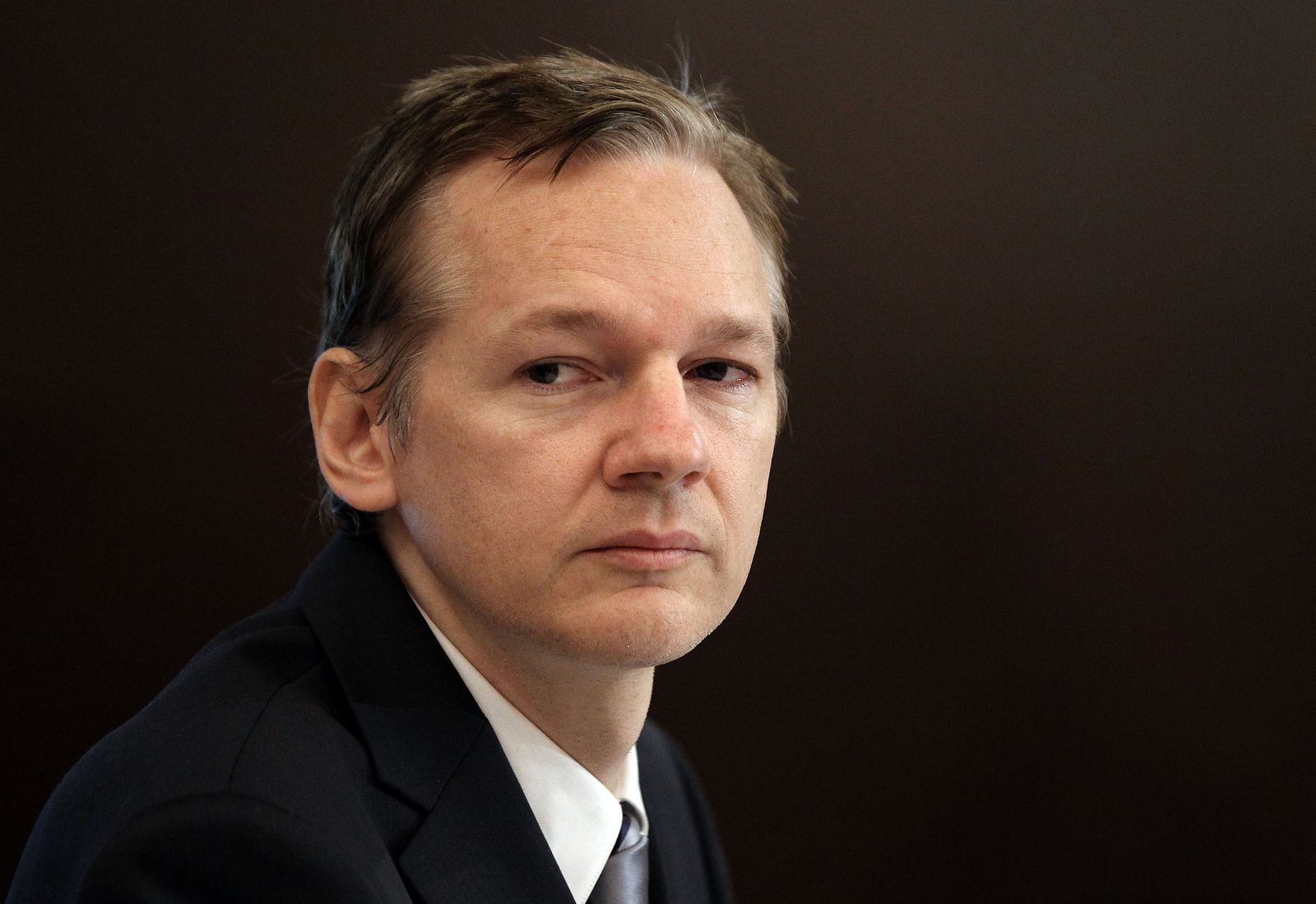 Julian Assange, the Australian founder of WikiLeaks, has been deined bail in London.