While it may not have come as a complete surprise, both the timing and reasoning behind Canada's exit from the Kyoto Protocol have been criticized worldwide.

The country's announcement, which came just one day after Sunday's vague international agreement in Durban to eventually extend the 1997 treaty, was both "unnecessary and in that respect very unpleasant," German Environment Minister Norbert Röttgen said on Tuesday in Berlin.

Eva Bulling-Schröter, head of the German parliament's environmental committee and a member of the far-left Left Party, called the withdrawal "dishonest and cowardly." Bulling-Schröter also accused Canada of using a "flimsy excuse" to shirk its climate protection responsibilities.

Claudia Roth, co-leader of Germany's Greens, made a similar accusation. "The fact that Canada wants to withdraw from the Kyoto Protocol is a fatal flight from responsibility," she told daily Hamburger Abendblatt on Wednesday. Green party parliamentarian and energy spokesman Hans-Josef Fell took the criticism even further, calling for a boycott on Canadian oil.

On Monday, shortly after he arrived back in Canada from the UN climate talks in South Africa, Canadian Minister for the Environment Peter Kent invoked his country's legal right to withdraw from the Kyoto Protocol -- the world's only pact enforcing carbon cuts to curb climate change. After two weeks of talks in Durban, on Sunday nearly 200 countries had agreed to extend the treaty, set to expire in 2012, allowing five more years to finalize a wider agreement. The first pact set limits for only industrialized nations, but not emerging economies such as China and India.

But because the agreement does not include the United States and China, the world's two largest producers of greenhouse gases, it won't work, Kent said. "If anything it's an impediment," he added.

Canada, however, has not enacted adequate policies to help it achieve its CO2 reduction targets. Prime Minister Stephen Harper's Conservative government has also been loath to rein in the country's booming oil sands industry, a growing source of greenhouse gas emissions. Indeed, Kent said the country's withdrawal from the treaty would save it some 14 billion Canadian dollars ($13.6 billion) in penalties for its failure to follow through on its commitments.

Already last year, Canada -- along with Japan and Russia -- had said it would not sign on to new Kyoto commitments. Rumors of the move also sparked criticism of Canada during the talks in Durban, but the country's full-fledged rejection of the treaty is viewed as a major setback to the global efforts to fight climate change.

UN climate chief Christiana Figueres said Tuesday that Canada had both a legal and moral obligation to reduce emissions and lead efforts to fight climate change, adding that she had been surprised by the country's timing. The agreement made in Durban to extend the Kyoto Protocol is crucial to a "new push towards a universal, legal climate agreement in the near future," Figueres added.

German editorialists on Wednesday weigh the implications of Canada's announcement.

"Canada has become the first country to leave the Kyoto Protocol, just two days after the end of the world climate conference in South Africa. Japan and Russia want to follow. ... If it stands for anything, Durban means the complete failure of climate-protection measures at the United Nations level."

"The decision made by the Canadian government to pull out of the Kyoto Protocol … represents a victory of reason. It shows that protecting the environment produces costs that, given concern over jobs, not everyone is willing to pay, particularly when important countries refuse to be pressured into joining environmental-protection treaties. The government in Ottawa thus deserves our praise. They have clearly shown that the Kyoto emperor is not wearing any clothes ... Canada has revealed the farce behind the international agreement, which was more of an informal arrangement than a treaty with teeth."

"The reason for Canada's exit is obvious. The country clearly missed its CO2 targets for the upcoming 2012 tally of the first Kyoto period. Instead of 6 percent reduction, emissions increased by some 30 percent -- a major blow to the country's image. The country would probably be slapped with fines or additional CO2 reductions requirements. The main reason for the debacle lies with Canada's energy policy. The oil industry is making more use of oil sands, which is environmentally costly. The country has also failed to fulfil its CO2 savings potential. Still, Canada wholeheartedly supports the global climate protocol set to begin in 2020. But how serious can this be?"

"Canada doesn't want to play by the rules any longer. It's no banana republic, no failed state and no dictatorship in a developing nation. It's an industrial country rich in earnings, natural resources and influence. And one that, despite all this, has undercut the foundation of diplomacy and global trade -- that is, the security that internationally binding treaties are supposed to guarantee."

"It would be a fatal signal to allow Canada to get away with this. Because why should anyone adhere to a treaty when they can agree upon it with fanfare only to simply give up later? Above all it must be the Europeans who defend their basic principles, putting themselves in conflict with a trans-Atlantic partner once again. A ban on dirty Canadian oil from tar sands is one answer, while another could be general punitive tariffs for those who don't take part in climate-protection measures."

"Canada has a reputation as the country of giant forests, clean air, clear lakes and rivers where salmon happily leap -- a unique environmental idyll. The exact opposite is true. The conservative government of Prime Minister Stephen Harper is pulling out of the Kyoto Protocol. In doing so, Canada is not only showing disdain for global climate-protection efforts, but is also undermining what to date has been the only binding climate agreement. The affront against all the states and organizations that are serious about reducing greenhouse gas emissions could hardly be any greater."

"The country should be shunned because of its ignorant stance. Europe and all the other countries that want serious climate-protection measures must put Canada on the spot. … If Canada manages to get away with it without large protests, then all the international climate-protection efforts will be threatened."

"Canada has shown once again just how often countries put their individual economic interests first, and just how casually environmental protection continues to be sacrificed." 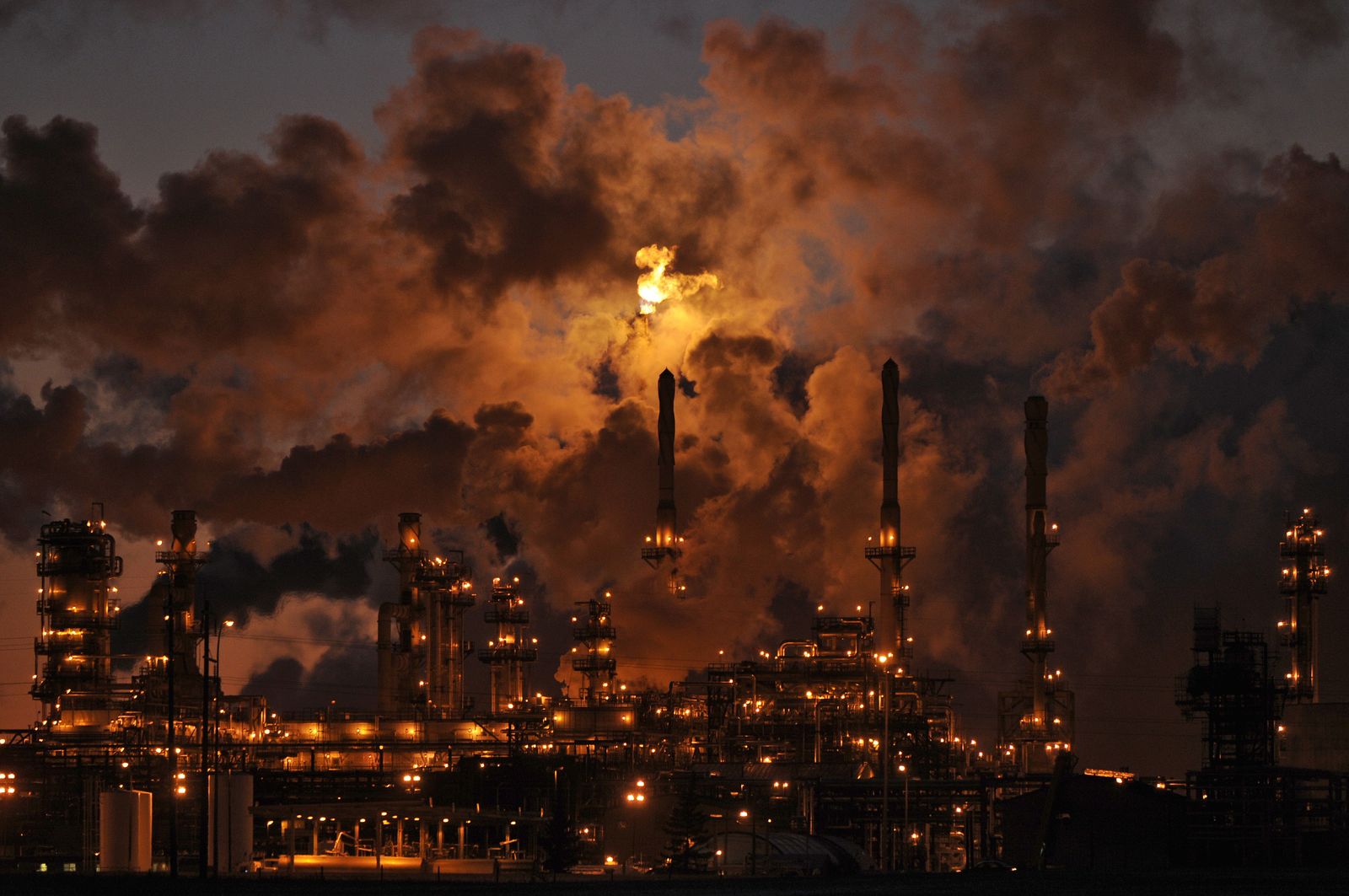 Oil refineries like this one in Edmonton, Canada have contributed to rising greenhouse gas emissions in the country.