After two years of preparations and two weeks of intense negotiations, the much heralded Copenhagen conference on climate change yielded little. The 193-nation summit was left with little to show for itself but a vague commitment to limit global warming to 2 degrees.

A last-minute deal agreed by a smaller group of countries, including the United States, China and Brazil, lacked any legally binding limits to CO2 emissions, and was not adopted by the assembled delegates but merely "noted."

German papers on Monday are scathing in their criticism of the climate conference and most are resoundingly pessimistic about the prospects for ever reaching an agreement in the future.

"The combined pressure to negotiate that had built up in the weeks and months leading up to the conference have disappeared into the atmosphere like CO2. It will hardly be possible to build it up again before the next climate conference in Mexico next winter. Without the minimum of figures that the powerful countries should have committed themselves to in Copenhagen, an agreement in Mexico will not be enough to achieve the distant goal of climate protection -- insofar as an agreement is even possible. The fight against global warming has been set back by years."

"The consequences will be widely felt. With every wasted year the path toward climate change becomes steeper and more expensive.  If the leaders come together again in a few years -- perhaps having realized that climate change is actually dangerous -- then they will be amazed to discover that reversing this is a lot more expensive and difficult than it would have been back in 2009. The solution to the climate problem will become all the more unlikely, just as it is becoming all the more drastic. It is almost like someone who is seriously ill going to the doctor too late."

"Worse yet, those who were at the forefront of climate protection are now losing legitimacy. Germany and the entire European Union justified their climate targets by saying that someone had to make a start. That was right. However, what happens when no one joins in? Those industries that were regarded as a burden when it came to climate protection will regard the Copenhagen disaster as a liberation. They will push even harder to avoid strict guidelines. The conference made it clear just how little others were prepared to negotiate."

"Above all national selfishness stood in the way of an agreement. As long as one country can hope for short-term economic advantage by opposing measures the majority support, then the others won't voluntarily join in."

"That can only change if such a refusal has consequences. There are already methods of imposing sanctions, whereby many developing countries are only given financial and technical aid if they agree to reduce their CO2 emissions. However, naturally that won't help when it comes to big developing countries like China or unwilling industrialized countries like the United States. The only thing that will work here is threats, such as a climate tariff, that states with a real climate target might impose on imports from states that have no clear climate goal in the future."

"In a globally connected world economic sanctions bring many problems, and would not be easy to impose. However, to simply wait until the blockade continues at the next conference is no alternative. The states that are willing to solve the climate problem have to make a serious threat to go forward alone. And they must be able to protect themselves against others who derive an advantage at the expense of the rest of humanity."

"Forget Copenhagen, now we are making a climate treaty in 2010 in Bonn and Mexico. That is the message from those who are talking up the conference, and trying to sell the result as some kind of progress. But after the fiasco there is no sensible reason for assuming that things will be any better next year."

"From the very beginning it was an illusion to believe that the two biggest climate sinners -- China and the US -- would allow themselves to be roped into a binding agreement with clear emissions targets and international monitoring.  The new global power China is using its growing weight above all to uncompromisingly ensure that there is no international interference in its national sovereignty."

"It also greatly sobering to realize that the Europeans, the model student when it comes to climate politics, has no appreciable influence any more on climate diplomacy. Whether the EU offered 20 or 30 percent reductions played no role in Copenhagen. The decisive moment was when Obama and Chinese Prime Minister Wen Jiabao made a deal in Wen's hotel room. It has never been made more brutally obvious that the Europeans have lost enormous influence when it comes to the central questions in international politics."

"In Copenhagen the world had to experience a climate disaster of the political kind.  Those who want to see a resolute climate protection, will have to reform the process, in order to achieve ambitious targets in the big economies that emit the most greenhouse gases."

"Three hurdles have to be cleared. First, it is only when the US delegation has a climate law, that has already got through Congress, that they will make any commitments. It is the most important stumbling block, one that cannot be cleared through international negotiations. President Obama still has a lot of work to do in persuading people in the US."

"Secondly, China has to allow international monitoring of its efforts to reduce emissions. Otherwise all of the government's assurances that it wants to drastically sink greenhouse gas emissions will be worthless."

"Thirdly, the topic of legally binding limits has to return to the negotiating table. And the EU has to fix its position. It has recently hesitated to increase its target for CO2 reduction from 20 percent by 2020 to 30 percent. Even if it is difficult, this would help to turn the conference at Bonn into a success."

"Even if Chancellor Merkel is warning people not to bad mouth the climate summit, the result is still deplorable. Over 40,000 politicians, diplomats, scientists, journalists, lobbyists and NGO activists traveled there to save the world. One hundred and forty private jets landed, 1,200 limousines ferried delegates around. The feverish summit, which gave a new name to gigantism, offered a soapbox for alarmists and the self-important."

"But now it is time to consider whether smaller, more matter-of-fact conferences would make more sense. It would also mean allowing those scientists to speak who have expressed well-founded doubts about the scenarios presented by the UN Intergovernmental Panel on Climate Change (IPCC). They have many facts on their side. Evaluation would be more appropriate than roaring that the world is about to end. The question of whether binding and dramatic limits of CO2 emissions are the only correct way to protect the climate must also be revisited. This is not only dogmatic but would also cost a fortune and have little effect. The plan to limit the average rise in the global temperature to 2 degrees Celsius is the most expensive task of all time.  Besides, it is a figure that has been set arbitrarily. The one-sided fixation on CO2 limits could be a greater detriment to the global economy than climate change itself."

"A global competition for the cleanest energy production and investments in saving and replanting forests would be more useful than the rabid caps in emissions at the cost of economic growth."

"The climate summit in Copenhagen was no success -- not even a small one. That's why one can't bad mouth the results, which Merkel has warned them not to do. No one can make them sound better than they are: Copenhagen was an all-out failure.  How this (process) is to be brought to an end in the next year remains a mystery."

"The format of the consultations at the UN level, in which every member state can exercise veto power, holds no promise for any success. The balancing of interests between those who want to preserve their standard of living and the emerging economies that want to soon reach such levels of prosperity appears to be impossible. Meanwhile, the global population is growing as well as its energy needs, which will lead to even greater CO2 emissions. Only the most stubborn climate change deniers would say that this is not going to impact the lives of millions of people."

"German Environment Minister Norbert Röttgen had demanded 'numbers, time frames and instruments' (at Copenhagen). He didn't get them  and that's going to be a problem for the German government. Under the government coalition agreement between Merkel's conservative Christian Democrats (CDU) and the (business-frienldy) Free Democrats (FDP), German CO2 emissions are to sink by 40 percent by 2020. The fewer the nations that participate (in binding emissions curbs), the more expensive that will be. For a chancellor who is already under pressure over her domestic policies but has until now been viewed with great deal of respect for her work on climate protection, Merkel will now face a double burden because of Copenhagen." 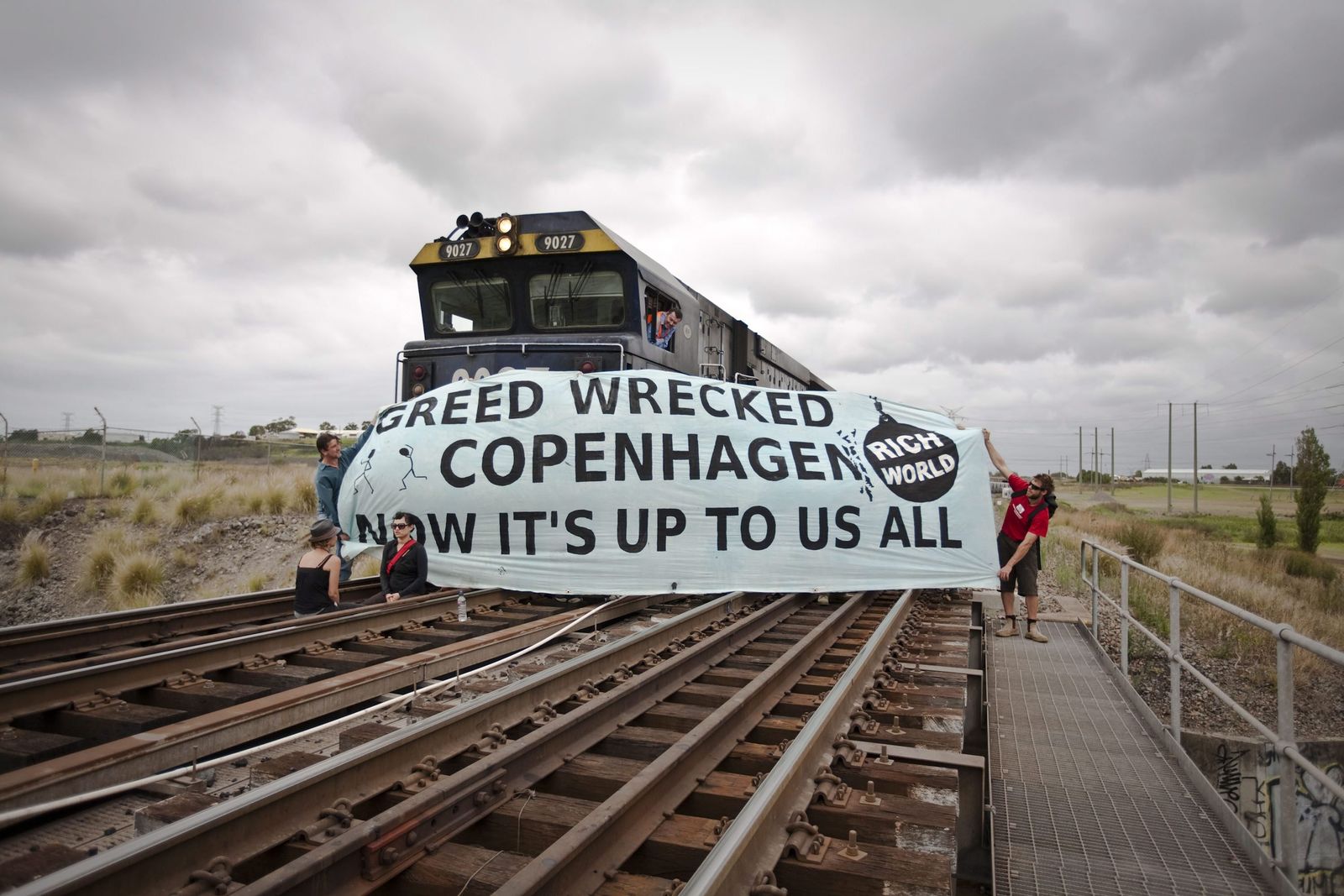 Climate change protestors hold up a banner in Newcastle Port, Australia on Saturday, following the failure of the UN global summit in Copenhagen.