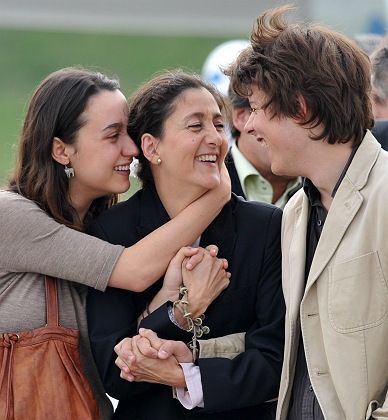 Ingrid Betancourt is reunited with her children.

After being held a prisoner in the Colombian jungle for over six years, the world's most famous hostage is free: The dramatic rescue of Ingrid Betancourt by Colombian forces ended not only her and the other hostages' personal tragedies, but will have far wider repercussions for the country and the region.

Betancourt, a French-Colombian politician, was kidnapped by the Marxist guerrilla group FARC in 2002 while campaigning for the Colombian presidency in an area with a high FARC presence. Her kidnapping became world news, especially in France, whose government tried to free her by negotiating with the guerrillas.

But the Colombian military, in the end, managed to free her in a dramatic rescue operation, which is undoubtedly a triumph for the Colombian government, especially for President Alvaro Uribe. But some German commentators also believe Washington has emerged with a stronger hand. Since the Colombian president is America's only ally left in the region, a victory for him can only boost the United States.

The freeing of the hostages was another blow for FARC, which some commentators believe is on its last legs -- but also, in some minds, for Venezuela's president Hugo Chavez, who tried to promote the idea that, as a close friend of FARC, he held the keys to freeing the hostages.

"Among the winners -- apart from Uribe -- is the government in Washington. As well as the left-wing FARC, the losers include Venezuela's president Hugo Chavez. After the freeing of Betancourt and because of its heavy losses in recent months, FARC appears to be on its last legs. Chavez, who styled himself as a big friend and promoter of the oldest and biggest Latin American rebel group, used to brag about having the keys to free Betancourt and the other hostages from their jungle prisons. Uribe has now thumbed his nose at Chavez."

"The real winner of the hostage freeing operation is Colombia's president Alvaro Uribe. His uncompromising fight against the rebel group FARC now looks like a successful strategy and throws a negative light on all those -- including Nicolas Sarkozy -- who had insisted that negotiations were the solution."

"At the same time Uribe's victory is a boost for the United States' position in South America. After the slide to the left by many Latin America states, Colombia's leader is one of Washington's last allies on that continent. The US support comes at great financial and logistical expense. That Uribe should succeed in pushing back the Marxist-inspired FARC should gratify the White House."

"In Washington Uribe's success will be viewed with great relief and gratification. Next to Mexico's head of state, Felipe Calderón, he is the US' most important and only protégé in the region. And Uribe, who is constantly criticized for his close ties to the ultra-right wing paramilitaries, is now in a more secure position than ever. The US government will find it easier to justify the $700 million it pumps into Columbia every year to fight the drug trade and armed groups."

"For Washington, Uribe's Colombia is of critical strategic importance in South America. Stuck between the left-wing, nationalistic and US-hostile governments of Venezuela and Ecuador and a large, liberal, left-wing country like Brazil, Colombia remains the only state in the region which follows the US at every turn and allows the US government to have its policies heard."

The center-left Süddeutsche Zeitung writes that after the loss of its most valuable hostage, FARC is near the end:

"More and more exhausted fighters have come out of the jungle in recent times to give themselves up. They can sense that their resistance movement is an anachronism; that a Marxist guerrilla force does not have a vision of the future to offer to an intellectually alert and economically agile country, such as Colombia in the 21st century."

"However, the extreme social inequalities which once led to the formation of FARC still exist. A large proportion of Colombians still live in abject poverty and have not benefited from the country's boom. It remains doubtful whether the warrior Uribe possesses the imagination to bring about a peaceful redistribution between rich and poor."

"The FARC guerrillas could hardly have suffered a bigger political defeat. Uribe's policy seems to be entirely vindicated and he has earned praise and approval from across the world."

"Yet, is Colombia now really on the long-sought after road to peace? No. The guerrillas are politically and militarily weaker than ever before: In the last 12 months they have lost a large part of their leadership and, as the hostage freeing shows, suffer clear communication problems from the constant military pressure. However, a complete military victory by the state is still not possible -- but neither are peace negotiations under these circumstances. Who, after all, likes to negotiate from a position of weakness?"

"FARC's time has run out. Yet, after the death of its leader Marulanda, the guerrillas' new leadership around Alfonso Cano will want to secure more promising conditions for a dignified pullback. This means the threat of kidnappings and attacks will increase."

"The longer Ingrid Betancourt was held in her jungle camp and the more heartbreaking the photographs became, the interest in Europe, especially France, only grew. The French foreign ministry, the office of the president and the president himself bravely tried to give the impression that Betancourt could be freed through negotiations. However, one cannot negotiate with terrorists and the FARC fighters did not want to hand over a trophy hostage ... She was freed by regular Colombian troops, who had put in long and hard work in preparing for the operation and then carried it out with a professionalism that no other fighting force in the region can match."