"Crisis, what is a crisis? We are not in a crisis."

Sepp Blatter's now-famous words, spoken at a press conference on Monday, are unlikely to have convinced many people. Few would argue that football's governing body FIFA is in one of the deepest crises of its history.

The organization is mired in corruption allegations relating to its current presidential election and the awarding of the 2022 World Cup to the Gulf state of Qatar. Qatar's Mohamed bin Hammam withdrew his candidacy for FIFA president on Sunday amid accusations that he and FIFA Vice President Jack Warner bribed members of the Caribbean Football Union to support bin Hammam's presidential bid. Bin Hammam and Warner, who deny any wrongdoing, were provisionally suspected by FIFA's ethics committee over the corruption allegations.

Blatter, who has been head of FIFA since 1998, is due to be reelected as president at the organization's congress in Zurich on Wednesday. His reelection seems certain given that he is now the only candidate and attempts to postpone the election have failed. The English and Scottish Football Associations wanted to delay the vote, but 172 out of the 208 delegations rejected a postponement on Wednesday.

Also on Wednesday, Theo Zwanziger, the head of the German Football Federation, called upon FIFA to re-examine the award of the 2022 World Cup to Qatar. In May, British politicians accused the Gulf state of paying bribes in return for votes, following an investigation by Britain's Sunday Times newspaper.

Major FIFA sponsors such as Coca-Cola and Adidas have put pressure on the organization to undertake reforms amid concerns that the corruption allegations are damaging the sport's reputation.

Blatter on Wednesday insisted that FIFA could solve its problems by itself. "I am the captain of this ship and we are weathering the storm," he said.

On Wednesday, German commentators took a look at the crisis at FIFA.

"If Joseph (Sepp) Blatter is re-elected as FIFA president on Wednesday as expected, it will not be a celebration of sport, but one of its darkest moments. … The organization, which corrupt top officials have perverted into a shameful money-making machine, needs reform. That is the responsibility of the wily Blatter, who did not only observe the evil doings of his subordinates for many years, but who also adjusted his power structures to fit their needs."

"Blatter and his delegates need to take a hard look at themselves in the mirror -- and not just out of vanity, as so often in the past. … Blatter, who himself was recently cleared by FIFA's own ethics commission, needs to ensure that all the corruption allegations are investigated by independent experts and that the results are made public."

"A cartel of silence within FIFA is currently breaking apart, just as it did in the International Olympic Committee around a decade ago in the corruption scandal involving the 2002 Winter Games in Salt Lake City. For the first time, there are witnesses from the executive committee who are giving a foretaste of all the information that still needs to be revealed. Just like with the IOC, pressure is building from the most important direction, namely from the sponsors."

"The avalanche has begun. It might sweep away not only Blatter but also a host country. Who knows whether Qatar will really be allowed to host the World Cup in 2022 under the blazing desert sun?"

"Bad, bad, bad. The past week has confirmed what we have actually always known about FIFA. It is a corrupt gang that has got football under its control. We regularly get annoyed about their behavior -- bribes worth millions, bought votes, restrictive contracts for those who want to sell a product that could even be vaguely associated with the FIFA name. Isn't it time for all this to finally stop? Can't FIFA transform itself? A democratic, transparent FIFA -- now that would be something."

"Whether FIFA boss Joseph Blatter is corrupt or not does not really matter. Admittedly, the question is important, given that he is one of the most powerful men in the international sports world. But it should not be the focus of the outrage about the dark side of the billion-dollar world of sports. The discussion in recent days over the question of who received millions of dollars from whom and when, is leading us in the wrong direction. What is more important is the fact that very many people were very often given a lot of money for a lot of decisions. And that suggests that it is not individuals who have failed, but the sports world as a whole."

"FIFA is so contaminated by corruption and scandals that it can no longer be fixed without outside intervention. Too many officials … have abused the wealthy sports body for their personal benefit for too long."

"When the indications and evidence of favoritism and corruption can no longer be suppressed, then FIFA examines itself using the complacent self-administered justice of its ethics commission. Its procedures end, at best, with the sacrifice of a few pawns. Joseph Blatter does not need to fear the commission -- he appointed most of its members himself. … FIFA is about as likely to purge itself as the Mafia." 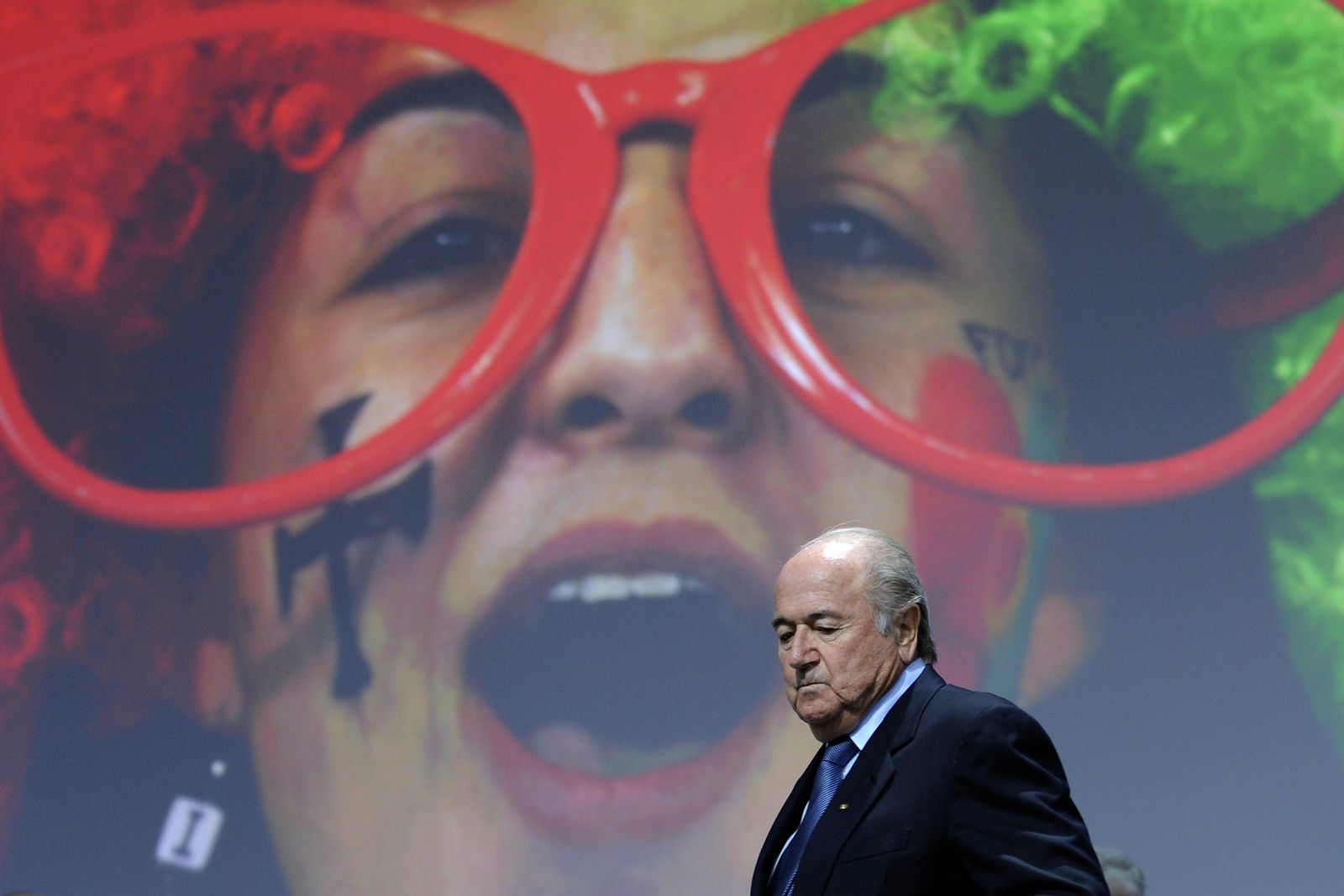 FIFA President Sepp Blatter is seen ahead of the start of the 61st FIFA congress in Zurich on Wednesday.