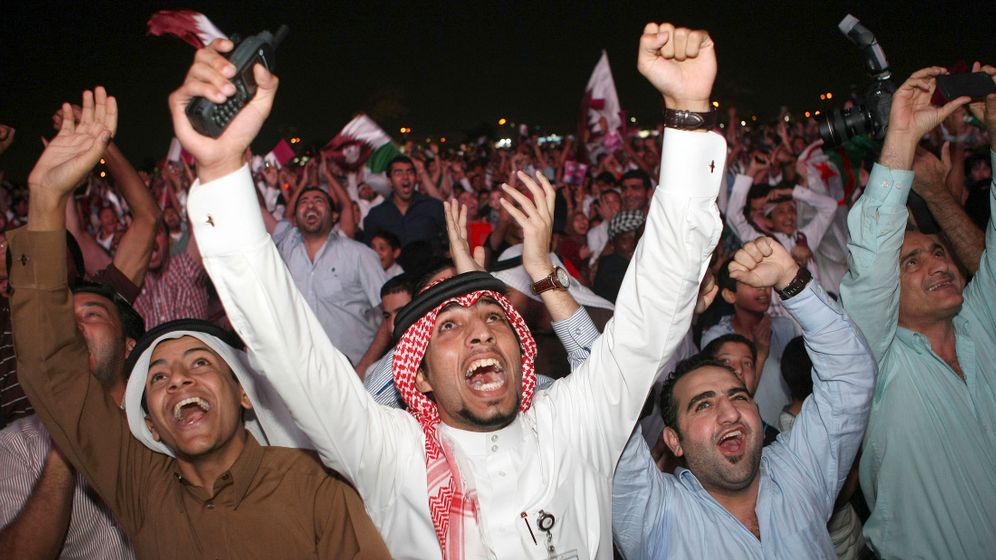 If one were being generous, one could argue that Thursday's decision by FIFA, football's governing body, to award the soccer World Cup for 2018 to Russia and that for 2022 to Qatar was a bid to win over new markets and fans for the game in untapped regions. Those of a more cynical persuasion, however, might see the decision as a case of money and lobbying winning out over existing sports infrastructures and traditions.

Understandably, the losers are crestfallen. In particular England, which only garnered two votes from the FIFA 22-member executive, was deeply disappointed. Andy Anson, the chief executive of the England 2018 bid, said that the selection process needed to be changed. He called on the Swiss-based organization to introduce a broader and more transparent decision-making process.

England's elimination in the first round of voting for the 2018 tournament was acutely embarrassing, considering the public lobbying from both Prince William and football star David Beckham.

After the decision was announced, British Prime Minister David Cameron voiced his disappointment. "I think we had the strongest commercial bid and the country is passionate about football, but it turns out that's not enough."

England 2018's Anson praised the winning countries as "formidable competitors" but hinted that developed Western democracies were at a disadvantage because they are held accountable to their own media. And scrutiny by the British press was indeed a factor during the decision-making process, with an investigation by the Sunday Times into alleged bribe-taking and vote-rigging causing two committee members to be barred from voting. On Monday, British public broadcaster the BBC aired a documentary claiming three executive committee members took secret payments relating to marketing deals in the past.

Sepp Blatter, FIFA's controversial president, has insisted that the Zurich-based organization can police itself via its ethics commission. However, Switzerland's Sports Minister Ueli Maurer is looking to close a loophole in the country's anti-corruption laws, which do not currently cover sports organizations.

'Masters of the Field'

Meanwhile the winners basked in their World Cup glory. "We are masters of the field!" blared the Russian sports daily Sovietsky Sport. "We never doubted our victory," was the triumphant headline in the tabloid Tvoi Den.

Russian Prime Minister Vladmir Putin and his deputy Igor Shuvalov had led the Russian bid, though Putin stayed away during the voting in Zurich on Thursday. Afterwards, however, he hopped on a plane to join in the celebrations. Arriving at the World Cup party in Zurich, Putin said that the tournament could help dispel Russia's Cold War image. He promised that Russia would spend billions on new stadiums and infrastructure.

One country that will have no trouble finding the finances to host its World Cup is Qatar. The tiny Gulf emirate, with a population of just 841,000, has never even played in a World Cup. FIFA inspectors who toured the country cautioned that its searing summer heat of almost 50 degrees Celsius (122 degrees Fahrenheit) could pose a potential health risk for players and fans.

However, the oil-rich emirate has sought to reassure FIFA by promising carbon-neutral air-conditioned stadiums. In an impressive round of lobbying, the sheiks promised to spend over $50 billion on infrastructure and facilities.

Thanking FIFA for its "bold vision," the Qatari bid committee chairman Sheikh Mohammed bin Hamad Al-Thani said: "We started off being written off, the unconventional bid, the bid that nobody saw coming, that nobody thought had a chance to win."

When news of the win in Switzerland emerged, Qataris hit the streets, dancing along the waterfront in Doha and blowing on vuvuzelas, the symbol of South Africa's World Cup this summer.

The German press on Friday greeted the FIFA choices with derision, with many papers saying money had won out over infrastructure and footballing tradition.

"It is not objectionable that FIFA should be looking for new markets. However, the officials have reached a point at which they are damaging their flagship product."

"It appears that huge sporting events are being awarded based on criteria other than organizational abilities. Otherwise Russia would not have been allowed to win, since the FIFA technical commission deemed its plans the worst of the four applicants for 2018. And neither would Qatar, which will have to put on the 2022 tournament in cooled-down high-tech stadiums due to 50 degree Celsius temperatures during the summer."

"At best, one could say that it was political reasons that persuaded the officials to make this decision -- for example, the idea that the World Cup should be staged at some point in an Eastern European country. The worst would be that FIFA is looking for states that are expected to provide little criticism about their non-transparent behavior or resistance to its almost dictatorial contract conditions."

"In either case, the risk FIFA is taking is that the core customers -- fans in Europe and South America -- will get sick of this carry-on and turn away from these kinds of tournaments. The stadiums will not be filled by sheiks and officials alone."

"The awarding of the 2018 World Cup to Russia is a completely consistent decision. The Russian delegation did not cloak their application with the social dimension, unlike the British Prime Minister Cameron. Instead they openly waved bundles of money. The same went for choosing the hosts of the tournament four years later. The emirate of Qatar admitted to the FIFA commission that the players and fans would be exposed to great danger in the deadly desert climate. Normally that would have led to an automatic disqualification for a World Cup application."

"But what is normal at FIFA? The World Cup decisions on Thursday strengthen the impression that something is not quite right in this association. ... The nostalgic will say that in the past everything was better and that everything was done properly. One shouldn't cling to such thoughts. Who knows if the fair-play idea was really so dominant earlier? But there is certainly no doubt that it is no longer so."

"In the bizarre world of FIFA, there are no coincidences. Everything can be explained. What is missing usually are the credit transfer slips and bank account details. As well as Russia, the FIFA executive committee, recently decimated due to corruption cases, chose the tiny emirate of Qatar to be the World Cup host in 2022. FIFA is developing new markets."

"Russia and Qatar were good, in fact perfect, and inevitable choices -- for corrupt officials, for the givers and the takers."

"The piece of paper that Blatter held in his hand had a great symbolic character. It said the world of football would continue as it was before: venal."

"The aim of the 22 members of the FIFA executive is as old as they are: They are looking for new markets, for more money. So Russia was awarded the World Cup for 2018 and Qatar got the one in 2022. The fact that this left FIFA's credibility by the wayside was of no interest to anybody."

"There is no question that Qatar went out and got the World Cup as if it were an attraction like the Cirque du Soleil. Tourists will have to bring the passion, if they want to follow their teams in the 50-degree heat of the desert. There is no tradition of football in Qatar, and the national team has never taken part in the final round of the World Cup."

"FIFA has recognized, however, the opportunities the small state offers. It provides a gateway to another new football world in the Middle East and a perfect opportunity for international TV marketing."

"In the Middle East, the big vices are not sex and alcohol but wealth and power. In this regard, FIFA has found the perfect place."