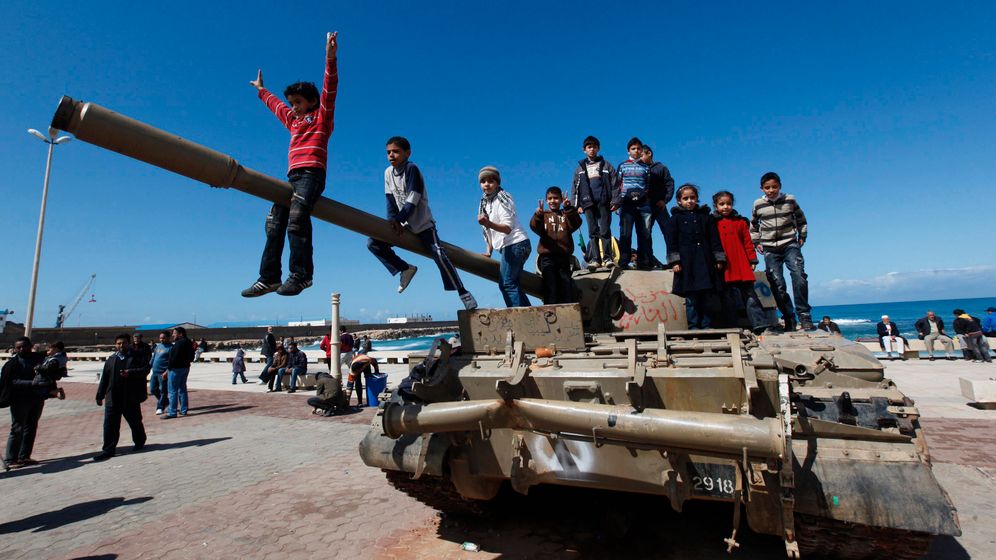 Libyan rebels and Moammar Gadhafi's forces continued their fight for control of Libya on Monday. Rebels holding Zawiyah, a city some 50 km (30 miles) west of the Libyan capital of Tripoli, told news wires that about 2,000 troops loyal to Gadhafi had surrounded the city and were likely to attack.

The dictator has retained control of Tripoli but rebels have seized large parts of the country including eastern cities, much of the oil infrastructure and a number of cities in western Libya.

At least 1,000 people have been killed in the two-week long uprising, the bloodiest of the recent wave of revolutions in the Arab world. Gadhafi has clung to power, despite growing international pressure on him to step down.

According to Serbian television, Gadhafi said foreigners and al-Qaida were responsible for the revolt. He condemned the UN Security Council's decision to levy sanctions and order a war crimes inquiry.

"The people of Libya support me," he said. "Small groups of rebels are surrounded and will be dealt with."

Western leaders hardened their message to Gadhafi following evacuations of hundreds of their citizens from the huge desert state over the weekend.

European powers have urged Gadhafi to stand down and Secretary of State Hillary Clinton said the US was "reaching out" to opposition groups. She said the US was ready to give "any kind of assistance" to protestors.

European Union diplomatic chief Catherine Ashton warned that Gadhafi would face "consequences" if he did not put an end to human rights violations immediately.

German editorialists on Monday ask what the West should do next and warn that the bloody stand-off could to continue for some time.

"Libya's future remains undecided. Gadhafi, who has the characteristics of a psychopath, knew that he had no way out, even before the UN sanctions. He is standing against a popular revolt which cannot be appeased through reforms. Libyans have adopted a clear stance despite the wave of violence: Gadhafi must leave. The violent man has no option but to continue to fight his own people. He only controls one part of his country. He can win back power -- or be destroyed. Fleeing into exile and peaceful retirement alongside like-minded people in Venezuela or Bolivia is no longer an option."

"But Gadhafi still commands his militias and is prepared to use them. Whoever doubts this should recall how he killed 1,200 opponents of his regime in one single day in 1996. When the current revolt started he fired back on the very first day. This 'brother leader' does not know what to do aside from resort to violence. The inventor of the 'third universal theory' may be a megalomaniac madman but he is also a realist. He now faces a choice between death in his palace, being condemned to execution by a Libyan court or a cell in The Hague. Given how the despot ticks, he is likely to opt for the palace and fight until the last bullet is fired."

"Sanctions are certainly not enough to counter the Libyan dictator Moammar Gadhafi but they allow the world community to deceive itself into thinking that it has finally done something."

"Talking about human rights is one thing, defending human rights, with whatever consequences, is something different. Currently there is no shortage of words -- but there isn't enough action."

"What do we need the NATO for if it does not even try to restrain a perpetrator of genocide like Gadhafi? Right now the most urgent task is to halt the murder of Libyans by a crazy head of state. Just as NATO once stepped in to stop Serbia's autocrat Milosevic from murdering in Kosovo, it must now intervene in Libya. It is incomprehensible why there are no aeroplanes with radar detection systems leaving Germany for the airspace above Libya, either on the orders of NATO, or even better, with a UN mandate. And why don't NATO jets force away planes arriving with more soldiers for Gadhafi."

"That would be the most active enforcement of the most basic of all human rights: The right to life."

"No one wants to guess what will happen next in Libya. In the countries where autocrats had to step down following the populations' protests, developments have been difficult. For example, neighboring Tunisia, where it all began, has witnessed more demonstrations with fatalities, because following Ben Ali's fall from power his long-standing right hand, interim president Ghannouchi, continued to lead the government. At least he has taken the right decision and announced his departure. The drama around Moammar Gadhafi affects the whole of the Magreb region, as demonstrations in Morocco show. The atmosphere in Algeria has also reached boiling point, but the rulers are still able to quell the demonstrations."

"Talk of a military intervention suggest that military action would solve Libya's problems. But following Gadhafi's removal, the country would be far from stable. The military can create time and space for political and social change -- but it can't bring about that change. On the contrary, intervening states are often part of the problem. During their bid to enforce order, they often become entrenched in power battles with local forces. Can the West resist the temptation to get involved in a conflict which it does not understand? The West must develop a complete strategy in which military intervention is just one step. Otherwise it will throw itself into another operation without a clear strategic goal."