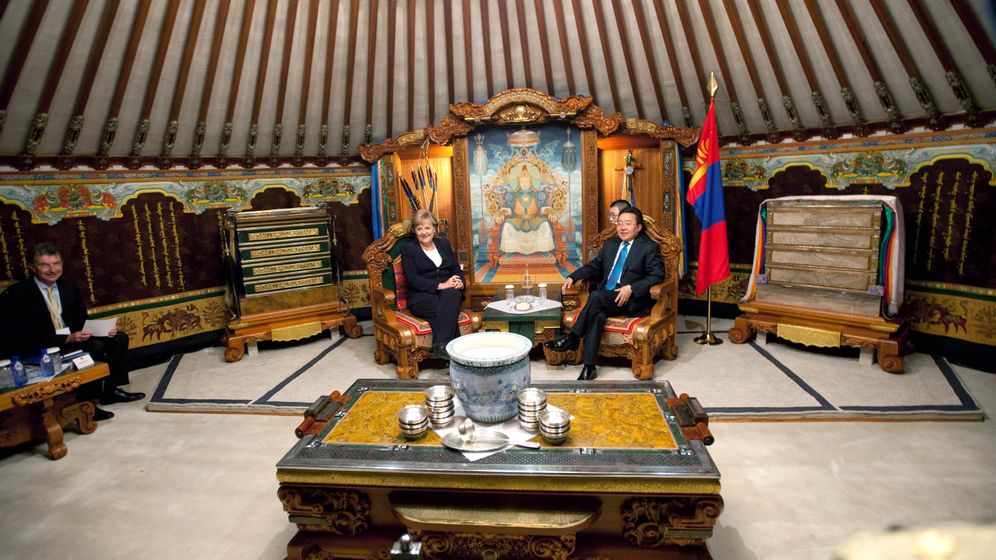 At first glance, German Chancellor Angela Merkel's decision to visit Mongolia precisely at a time when Europe's debt crisis is hotter than ever might seem peculiar. But cool-headed economic interests were behind the trip: The Central Asian country has raw materials that Germany's industry desperately needs.

On Thursday, the governments of the two countries signed a commodity partnership agreement. The deal promises, among other things, that no limits will be imposed on the quantity of raw materials that Mongolia supplies to Germany. Mongolia, for its part, wants to benefit from the deal by making sure that the raw materials are processed in the country.

"We have the raw materials, Germany has the latest technology and the know-how," said Mongolian Prime Minister Sukhbaatar Batbold, who described Merkel's visit as historic. Merkel promised that Germany intended to pursue "long-term, equitable and sustainable development."

Mongolia is one of the Top 10 countries in the world in terms of quantities of natural resources and is home to huge deposits of copper, gold, silver and uranium. The country also has large reserves of rare earths, expensive metals which are in demand in high-tech industries, where they are essential for manufacturing various products. German companies have expressed concern about access to rare earths, especially as China, which dominates the market, has imposed restrictions on their export.

"Germany needs to forge strategic alliances in the area of raw materials, which could become scarce in the coming decades," said Ekkehard Schulz, a member of the supervisory board of engineering giant ThyssenKrupp, in remarks given to the news agency Reuters.

International mining companies are currently in a race to get access to Mongolia's rich mineral resources. A number of German mining and engineering companies also signed billion-dollar deals during the visit, the first by a German chancellor to Mongolia.

On Friday, German media commentators take a look at the raw materials deal.

"(Merkel's trip to Mongolia) comes at a time when her schedule is packed because of the debt crisis. But her visit could not be postponed. After all, it was all about access to the raw materials which Germany does not have but which it desperately needs for its economy. Many of the resources which are rare in this country can be found in large quantities under the grassy steppes of Mongolia."

"The chancellor was quick to register a success in the form of a commodity agreement. Mongolia will in the future supply Germany with metals such as copper and the highly coveted rare earths. That sounds good, but is it? Probably not. Such a document does not really mean very much by itself. Other countries like the United States are also trying to get access to Mongolia's coveted reserves through political means. It remains to be seen who will get the biggest piece of the pie in the end."

"The first German commodity agreement with Mongolia is a step in the right direction in order to secure long-term access to such resources. The global competition for raw materials is getting tougher and tougher. It's not just that the prices of raw materials such as rare earths are increasing. Many German companies are now worried -- and rightly so -- that in the future they may not be able to obtain sufficient quantities of certain materials, especially given that leading producers such as China are even restricting exports."

"The German government and industry have been pushing for commodity partnerships for some time now, to ensure that Germany's industrial competitiveness doesn't suffer even more than it already does as a result of already intense international competition for raw materials. But compared to other countries' efforts, the initiatives are coming very late. For too long, German industry and the German government have paid too little attention to the issue of access to raw materials."

"Despite all the drama in Europe, there are other regions and key issues that are of crucial importance for the German economy. This includes finding and securing raw materials."

"Demand is rising rapidly around the world. The scramble for rare earths already began a long time ago. China in particular, which possesses large deposits of rare earths, recognized early on the importance of raw materials. China dominates the market and can grant a competitive advantage to its own companies. Europe must be careful that, given its current preoccupation with its own problems, it doesn't get left behind."

"Rare earths have never been a priority of German economic policy. German industry has tried to help itself by forging partnerships with companies in Australia. Yet without agreements at the governmental level, their efforts remain piecemeal. With almost no natural resources of its own, Germany is dependent on partnerships with other countries in order to guarantee long-term access to scarce resources. In this respect, the commodity agreement with Mongolia is an important step. Merkel's visit can be viewed as a success."