In 2004, German Chancellor Gerhard Schröder famously referred to then Russian President Vladimir Putin as a "flawless democrat." This weekend, it became more apparent than ever that Schröder may have been mistaken.

Just as the world had been anticipating for months, current President Dmitry Medvedev this weekend suggested that Putin should be the presidential candidate for the United Russia party, making it virtually certain that Putin will move back into the Kremlin following elections next year. Medvedev, for his part, is likely to take over Putin's current position as prime minister.

The job swap, combined with next year's extension of the presidential term from four years to six, means that Putin could rule Russia until 2024.

Not everyone is pleased with the arrangement. In the West, Putin's brand of heavy-handed rule has often been criticized for its democratic deficiencies. The backroom nature of the Medvedev-Putin agreement is likely only to augment such disapproval. Others are concerned that the deal could lead to economic stasis and a freezing of any kind of reform. Furthermore, critics say it locks a vastly corrupt bureaucracy into place; Russia is, according to the Berlin-based NGO Transparency International, 154th out of 178 countries rated when it comes to official corruption.

Russians, too, are tired of the country that Putin has created. A recent survey found that fully 20 percent of Russians are interested in emigrating -- hardly a stamp of approval for the prime minister-cum-president.

German commentators on Monday are also widely critical of the move.

"One cannot, at least, accuse Putin in this case of having been dishonest. Rather, his planned return to the Kremlin cast renewed light on the country's real power structures.... The most powerful man in Russia spoke conspiratorially of an agreement between him and Medvedev that was made long ago but which was never made public. In other countries, that would of course be a huge scandal, but in Russia it has become a matter of course that important decisions are made without public input or knowledge. That is good for Putin.... But it is bad for Russia."

"Putin's Russia is an anti-modern, undemocratic state ... the biggest country on earth is ruled by decree. United Russia is not a party which develops ideas, and few debates take place in parliament. Such a situation may have been justified after the collapse of the Soviet Union and the crazy, anarchic years that followed under the leadership of Boris Yeltsin. But it is no longer helpful. Governors that are named by Moscow, television channels that are kept under tight control -- all that suppresses the openness and competition that Russia needs more than ever before."

"The Russian public yearns for a strong leader and Putin has developed the image of being one. He gives the tormented Russians a renewed sense of pride and allows them to believe that their country is once again a global power. But he doesn't tell them that it is strong revenues from oil and natural gas sales, and not his reforms, which have led to an expanding Russian economy. But there is a good chance that the economy may not always be so rosy. Neither as president nor as prime minister has Putin sought to broaden the country's economic base. Instead, he has centralized it and constricted it."

"If one is honest, Putin has given away the freedoms won following the collapse of the Soviet Union and has instituted an authoritarian system. Putin's power grab is only good news for the ruling clique."

"Medvedev has no instinct for power. The Russians, according to a survey, are hard-pressed to name a single success achieved by the Kremlin boss during his presidency. Nevertheless, one has to give Medvedev credit: He is an outstanding actor."

"For almost four years, Medvedev has preached modernization: He used drastic words to explain why reliance on raw materials exports was 'archaic' and led to crises; why 'legal nihilism' damages Russian companies; and why the country needs more freedom and competition. It was exactly the message that Russia's intelligentsia and Western investors wanted to hear. And foreigners in particular took the message at face value."

"But Medvedev's modernization was a bluff. In his speech on Saturday, he praised the 'Putin System' -- within which he was allowed to serve as the king's placeholder for four years -- just as seriously as he decried the weaknesses in Russia's economic system. He himself nominated Putin as his successor, even though he repeatedly criticized Putin's variety of state-controlled capitalism. Putin and Medvedev are brothers in spirit. By demonstrating differences of opinion, they were merely creating the impression of pluralism."

"Putin entered office in 1999 with the goal of stopping the disintegration of Russia and to this end, he waged a brutal war in Chechnya. Today, the Kremlin is faced with a growing call from the right wing to relinquish the North Caucasus because it has become so difficult to control. For years, Putin has said the battle against corruption was one of his most important goals, but his country continues to fall in international corruption rankings. Putin wanted to reduce his country's reliance on oil and gas, but in reality it has increased. ... Putin sought to re-establish Russia's industrial foundation, but the technological gap with the rest of the world has only widened. ... Infrastructure and healthcare continue to collapse despite billion-dollar programs aimed at refurbishing both. When such failures become apparent, Putin blames those below him -- guilt is born by the weaker."

"Nevertheless, Putin is still quite popular. That is largely the result of his having introduced calm and stability after the chaos of President Boris Yeltsin in the 1990s and because of the fact that many in Russia's cities have benefited from Russia's gas and oil-powered economic growth. That, though, won't be enough legitimation to get through the next 12 years. Still, it likely won't matter what the Russians think about the results of his leadership." 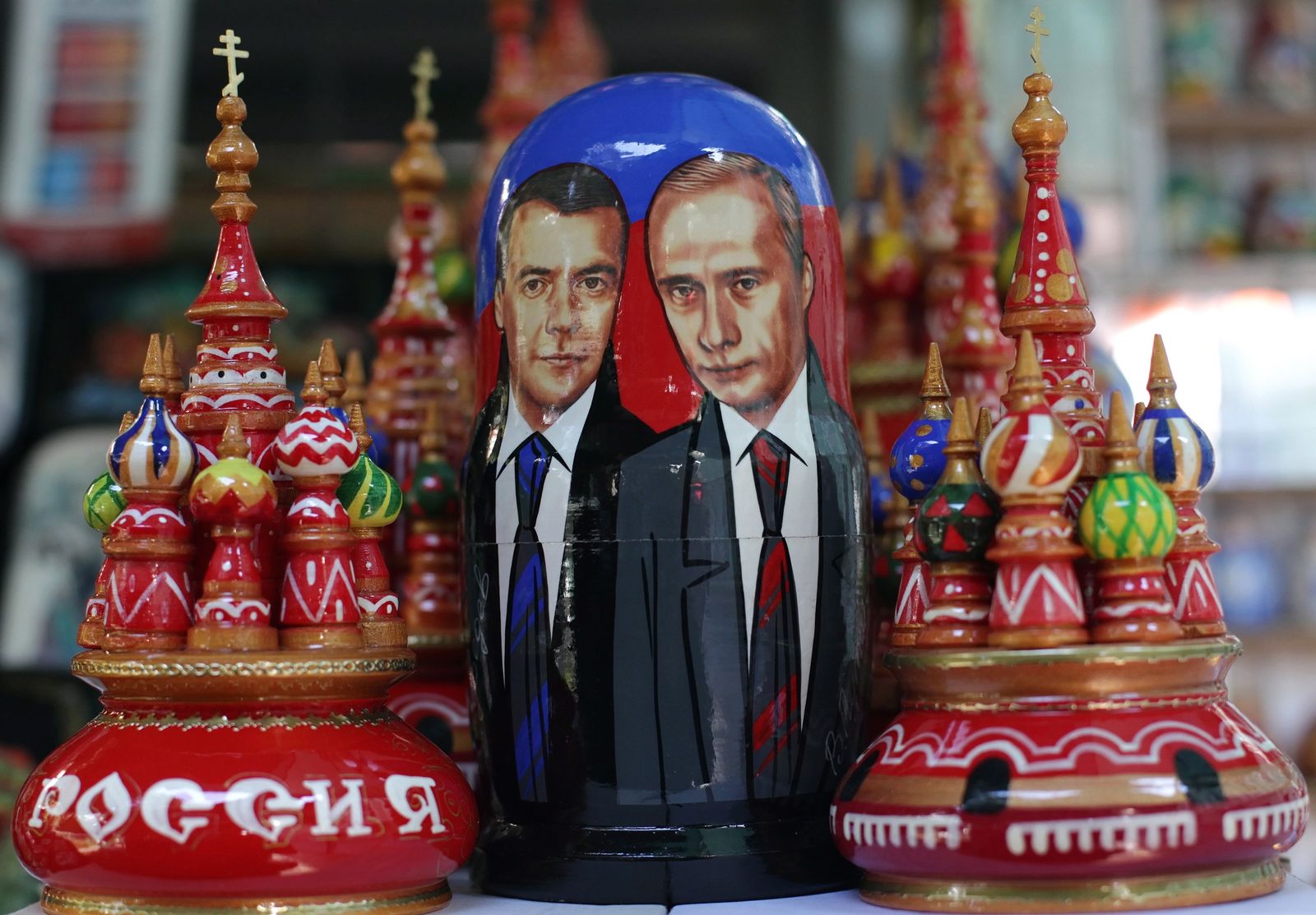 Inside is another Putin figure. And another....