The Israeli aerial bombardment of targets in the Gaza Strip entered its fourth day on Tuesday. Numerous facilities used by the militant group Hamas, which administers the region, were hit and destroyed. The Israeli military also targeted the homes of Hamas military commanders. 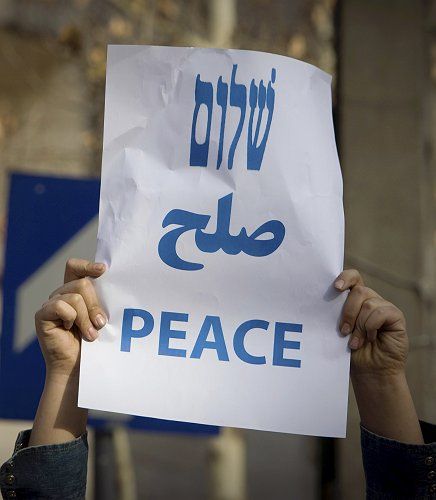 An Iranian Jewish school boy holds a sign in Tehran.

The air raids come in response to the unceasing firing of rockets from the Gaza Strip into Israel. The number of projectiles fired has increased dramatically in recent days as Hamas elected to allow a cease-fire to lapse earlier this month. Israel has said it is preparing for an extended conflict and that its ground forces are ready should a ground invasion of the Gaza Strip become necessary.

According to reports, some 360 Palestinians have been killed. The United Nations says that 64 of those dead were civilians. Four Israelis have been killed by cross-border rocket fire in the last few days.

Despite the damage and casualties, Hamas has been steadfast in its pledge to continue its fight. "Zionists, wait for more from the resistance," Hamas spokesman Ismail Radwan said in a text message to reporters, according to the AP.

Numerous world leaders have called for a cessation of the violence, but so far there has been little indication that peace might be at hand. France has called for a meeting of the foreign ministers of EU member states in Paris on Tuesday evening to discuss the situation. German Foreign Minister Frank-Walter Steinmeier spoke with Palestinian President Mahmoud Abbas on the phone Monday evening and pushed for an immediate cessation of hostilities. German Chancellor Angela Merkel has said that the blame for the violence lies squarely with Hamas.

Not everyone agrees with Merkel's assessment however. German commentators take a look on Tuesday.

"How can an outgunned organization really believe that it can continue to terrorize Israel's citizens without having to pay a price? The answer lies in the 2006 war in Lebanon, which Israel won by a hair, but which the Arabs view as an Israeli defeat. Owing to a mix of an ideology geared toward the annihilation of Israel and an underestimation of its opponent, Hamas has tried to expand Israel's tolerance for violence. But Hamas has steadfastly ignored all the blinking red stop signs that the Israeli government has posted over the last few days and weeks."

"Perhaps Hamas also believes the myths widely circulated among Islamists that holds that Western democracies are weak, decadent and no longer willing to put the lives of their soldiers on the line."

"It is exactly this appearance of weakness that Israel both intends to and must correct in order to both re-establish its own deterrent and to change the beliefs that Hamas' leaders base their calculations on."

"Israel's army has dubbed its offensive against Hamas 'Operation Cast Lead,' but a more fitting name would be 'Operation Futility of Spilled Blood.' After three days and over 300 dead Palestinians, the leaders of the Arab world are starting to suspect that the Hamas problem cannot be solved. Bombs and rockets won't do anything to drive a wedge between the Islamists and the population of the Gaza Strip. Likewise, the expectation that more Palestinian suffering will lead to increased security for Israel is also unfounded. This isn't because the people love Hamas -- they haven't for quite some time. On the contrary, this is because people who have lost a brother, a sister or a son to Israeli bombing are not going to give their vote to a politician who is friendly toward Israel."

"The new war in Gaza confirms the old platitude that there will be no peace in the Middle East as long as no solution has been found for the Palestinian problem ... But Israel doesn't want peace -- at least not the peace conditions put forth by the UN. And the Palestinians are equally opposed to reconciliation. Eventually, after many long and deadly days in Gaza, a diplomatic solution will be found. But it will not be a solution that solves the problems but, instead, just patches them over. In the worst-case scenario, the conflict will spill over into Lebanon or Iran. The insight that bombs are no substitute for politics still holds true. But, for the time being, they use them anyway."

"It's hard to say whether Israel could ever really attain the immediate goal of its air strikes of putting an end to the rocket fire (originating in the Gaza Strip). And it can't rule out that Operation Cast Lead won't lead to a dangerous escalation of hostilities."

"Considering Israel's ultimate goals, even the utility of a limited ground offensive is doubtful: Hamas is not afraid of it, and it might even be really hoping for it.  Hamas will survive Israel's attacks with only a certain degree of damage. And even though Hamas is on the defensive now, it can still portray itself as the winner while many in the Arab world cheer it on."

"The best that can be hoped for is a re-establishment of the cease-fire. It would absolutely have to include an end to any and all rocket attacks against Israeli territory -- something which radical Palestinians won't like. In return, Israel would also have to relax the blockade on the Gaza Strip -- if not lift it completely -- in order to counteract any further radicalization. At the same time, though, there is also the issue of how to stop Hamas from building up its arms, something which even the blockade could not succeed in doing. It's true that Israel is partially responsible for the great suffering of the Palestinian population. But it's also true that the leaders of the Palestinians in Gaza are fixated on keeping the battle against Israel alive."

The op-ed page of Die Tageszeitung includes a piece written by Gideon Levy, a former spokesman for Israeli President Shimon Peres and a journalist for the Israeli newspaper Ha'aretz:

"Once again, even if it can justify its actions, Israel's violent response has exceeded all proportionality and all red lines, violating humanity, morality, international law and reason.  What was started in the Gaza Strip on Saturday is a war crime and sheer idiocy."

"The Qassam rockets that have rained down on the areas bordering Gaza can no longer be tolerated, even before they caused any deaths. But the response to these rockets should be diplomatic efforts to re-establish the ceasefire. Only then, if these efforts fail, should Israel respond militarily in a proportional and incremental way."

"But no. It's all or nothing. Israel's army has unleashed a war. And, as usual, when this war ends, we can only hope that someone is watching over us.  Hamas has its own stupidity to thank for bringing this war upon itself and its people. But that doesn't excuse Israel's overreaction.  Israel has now shown that there is no connection between its PR, which focuses on peace, and its pugnacious behavior."